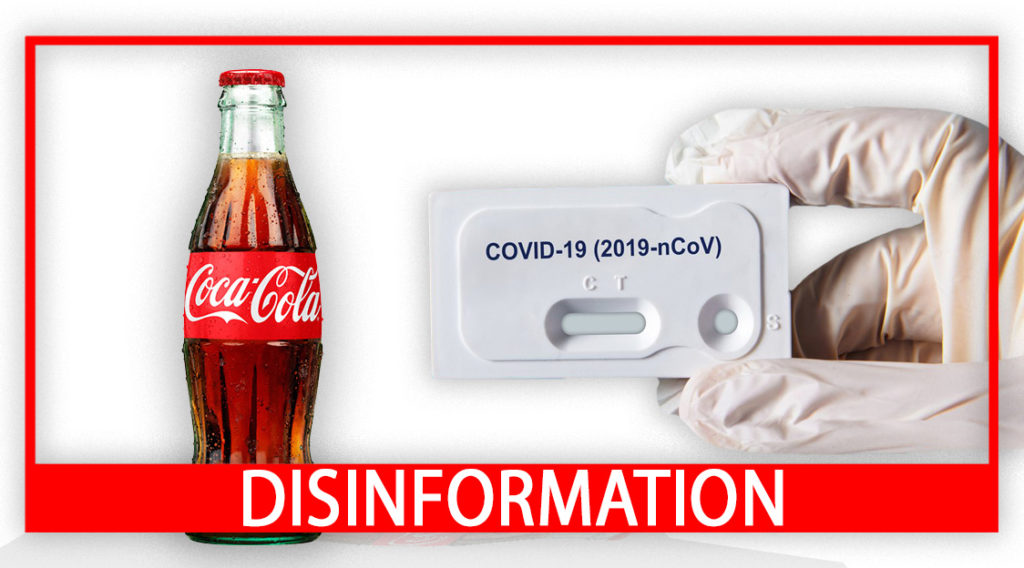 On December 11, Facebook user Maka Beridze published a video on her account with the following description: “Corona was detected in coca-cola in Austria, i.e., tests are incorrect”. Video description doesn’t provide any other information including the type of tests that were used. As for the video, it depicts Austrian MP Michael Schnedlitz’s speech at the parliament, where he criticizes the government’s approach to the pandemic and states that tens of millions of Euros from tax-payers’ pockets are spent on tests that don’t work in reality. During his speech, MP experiments on coca-cola: he takes a sample from coca-cola using a cotton swab, places it on the test, afterward of which, the sample tests positive.

As of December 14, the video has over 10 thousand shares. 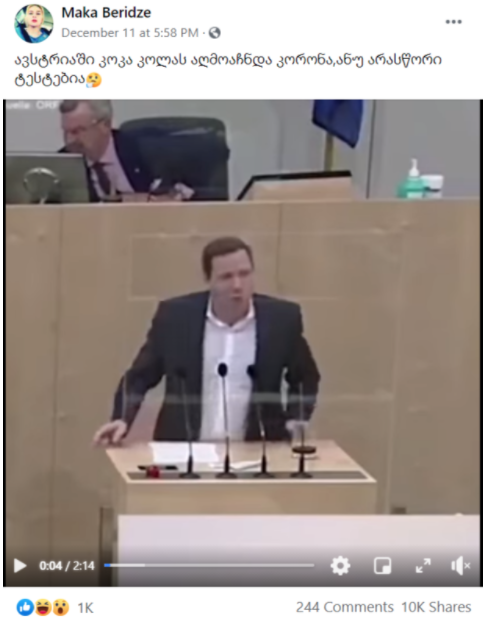 Austrian MP incorrectly tested coca-cola for COVID-19 using a rapid test and that’s why it tested positive. Test-manufacturing company Dialab responded to the experiment and stated that in this case, even a pregnancy test would be positive, therefore knowledge in chemistry is necessary for the diagnosis of COVID-19.

Why was coca-cola COVID-positive?

In his speech at the parliament, opposition party FPÖ’s MP Michael Schnedlitz claims that rapid tests don’t work and that government inappropriately spends money on it. He experimented on coca-cola to prove his point and got a COVID-positive result, albeit MP made a mistake and didn’t consider certain chemical laws. He placed sampled cotton swab straight onto the test kit, while samples for COVID-19 testing are first immersed in extraction buffer to regulate pH rate. When it comes to rapid antigen tests, the sample’s pH (acid-alkaline) needs to be in a certain range for it to be tested.

Rapid tests are covered in antibodies. If the test detects SARS-COV-2 virus antigens in the sample, it reacts to it and changes the color. However, it should be mentioned that the test also changes color when its antibodies are destroyed. This happened when MP Schnedlitz took the test incorrectly and placed the coca-cola sample straight onto the test: coca cola’s high pH reacted to antibodies of the test and as a result, the test changed the color and showed positive results.

German media outlet Welt contacted rapid test-manufacturing company Dialab for a comment. The company noted that in such experiments, even pregnancy tests would be positive. They advise Austrian MP to improve his knowledge in chemistry before making such inappropriate statements.

Moreover, Maka Beridze’s post doesn’t clarify which test is the topic of discussion and since in Georgia, PCR is most commonly used for diagnosing COVID-19, the mentioned information misleads readers in this context as well. Rapid tests that show results in 15-30 minutes, indeed, work and can detect COVID-19 infection; however, PCR tests are more accurate. That’s why a doctor might recommend a molecular test after a rapid test to confirm the result.