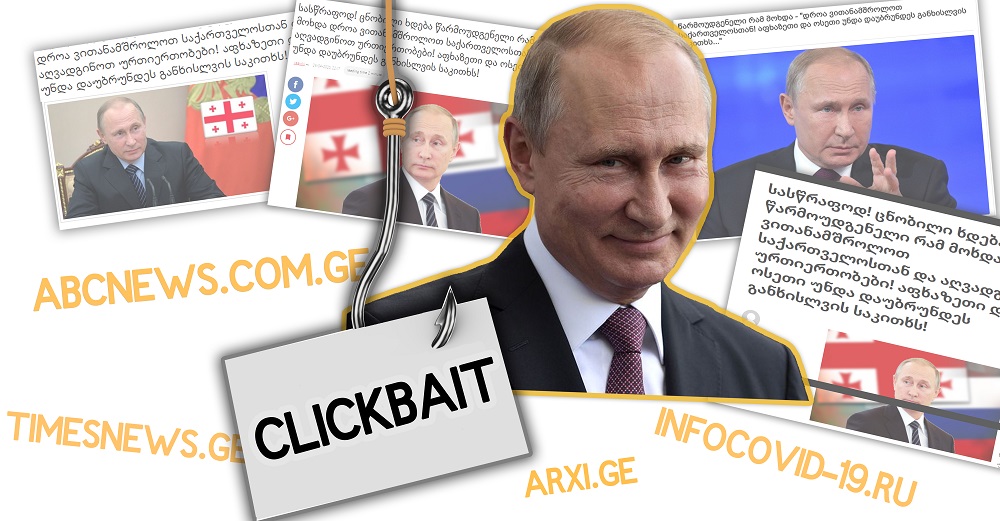 For economic gains, clickbait sites try to lure audience with clickbait titles and visual effects. Their motivation can be explained by the very interest to get economic benefit. However, there are exceptions to this general rule, when information of political nature is discreetly placed in sensational media content. Furthermore, some links contain malign programs too, which steal personal data of customers without their consent.

All these publications contain identical message that Putin spoke about restoring relations between Russia and Georgia, including about revision of visa regime and the issue of Abkhazia and so-called South Ossetia. The stories, not supported by any sources, with almost identical titles and illustrated with Putin’s photo, create an impression that this issue may be resolved in favor of Georgia.

Sources are indicated only in two cases, though both sources are fictional and irrelevant. For example, the source indicated by abcnews.com.ge directs a reader to an advertisement of Portuguese tourism agency, while the “first-hand source” indicated by timesnews.ge at the end of the article is the personal blog of Giorgi Melikidze, “George’s Blog,” which, in turn, does not rely on any source while Giorgi Melikidze is the owner of abcnews.com.ge and timesnews.ge. 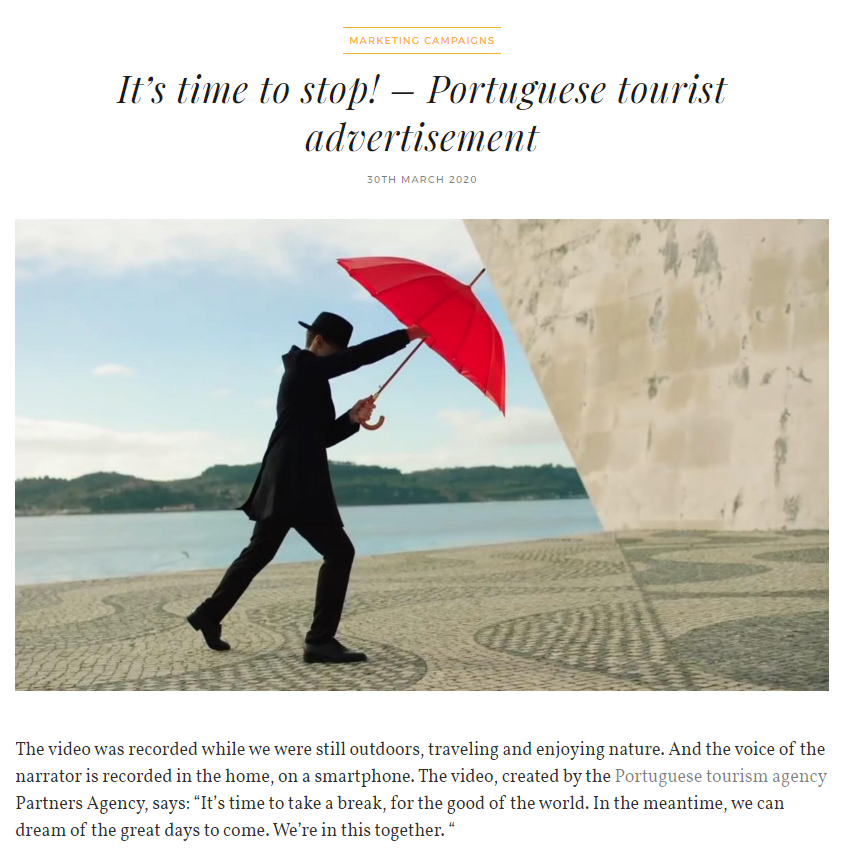 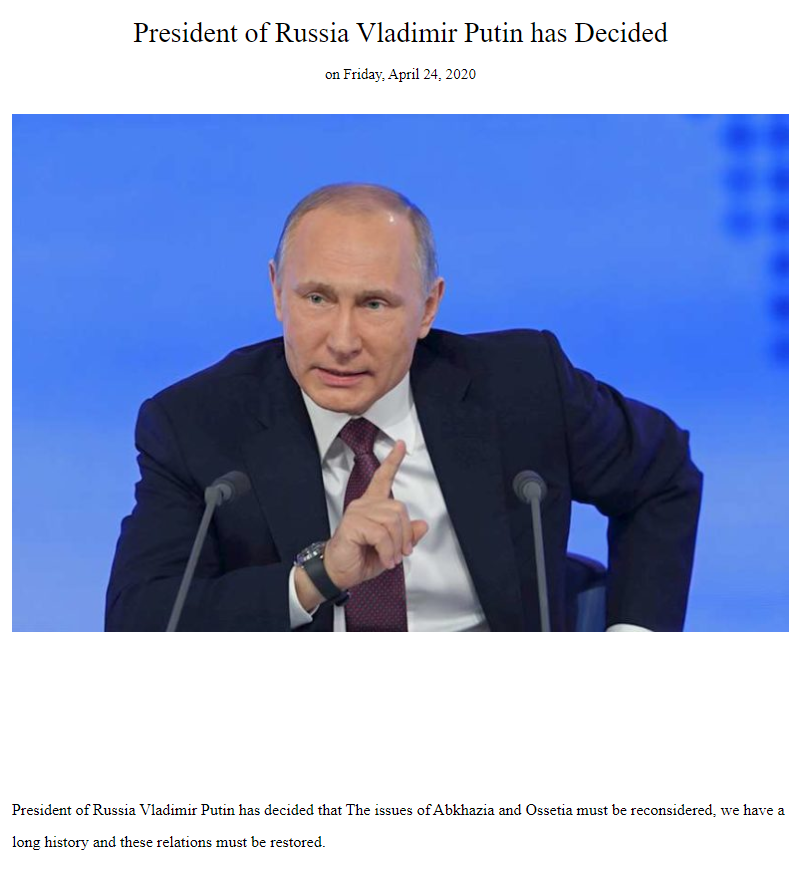 It is worth to note that on his blog, Giorgi Melikidze places the information about Putin alongside apolitical blogposts which concern his education, work, entertainment and Georgia’s Patriarch Ilia II. 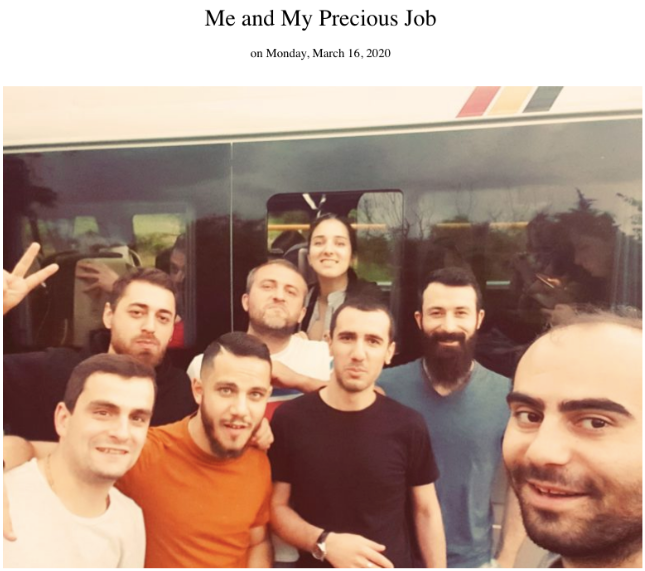 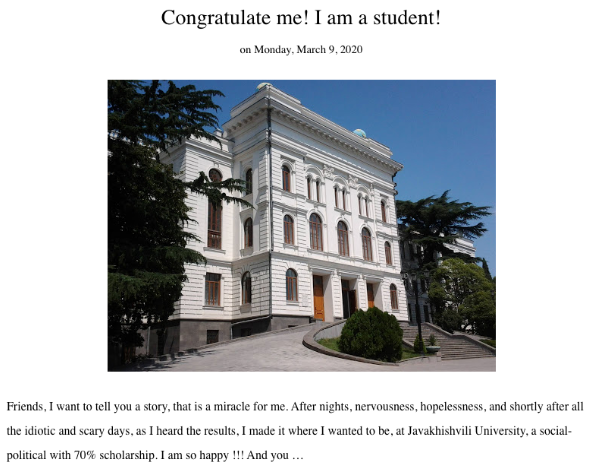 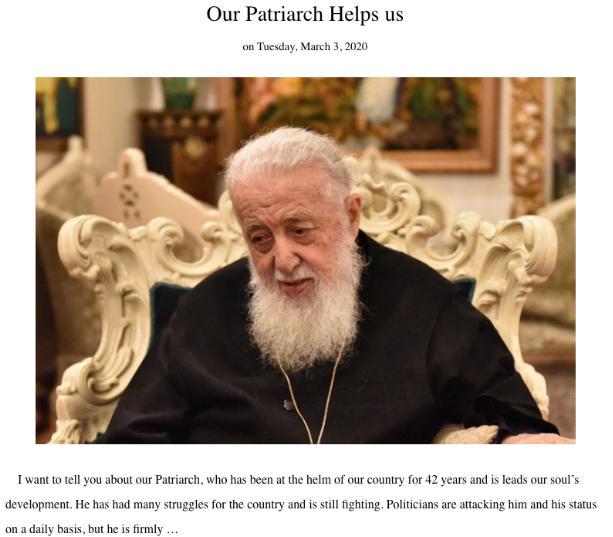 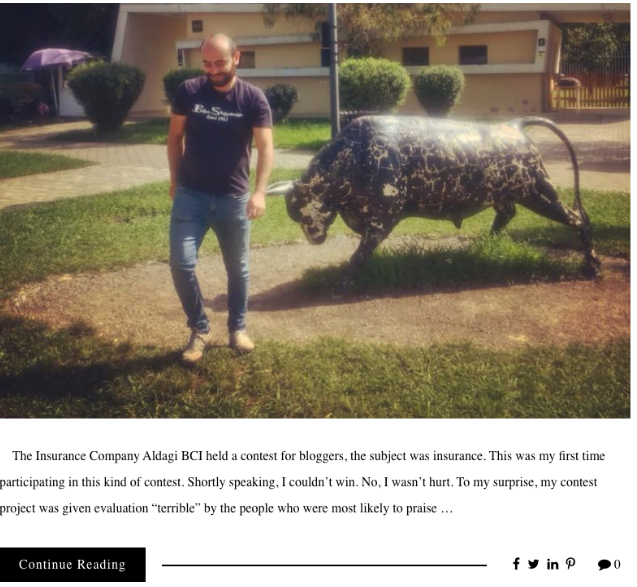 Infocovid-19.ru contains another story, published on 25 April, with a misleading title “We have lost Georgians’ friendship and affection, changed 4 million Georgians into 300 thousand Abkhazs,” illustrated with Putin’s photo. The clickbait title and photo create an impression that such statement was made by Putin, though the content of the story is different and informs that a political scientist, Andrey Nikulin, in his televised appearance on Rossiya 1 made the following comment: “If Russia wants to sort out political relations with Georgia, it should allow refugees from Abkhazia to return to their homes.” 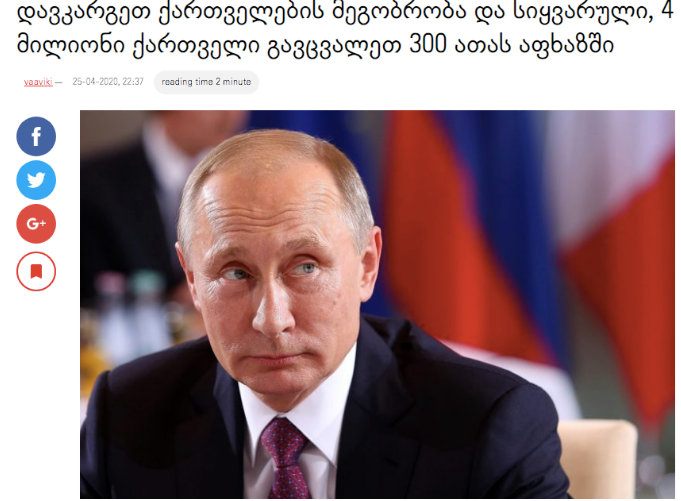 Apart from publishing clickbait materials about Putin, the abovementioned portals, at various times, spread other disinformation and misleading content of political nature, which were shared by other actors in a coordinated manner.

According to Whois Lookup information, infocovid-19.ru was registered on 23 March 2020 and its IP address is in Moscow. The site hides virus/malign program JS/Adware.Chogdoul which steals customers’ personal information, IP addresses and other data without their consent. 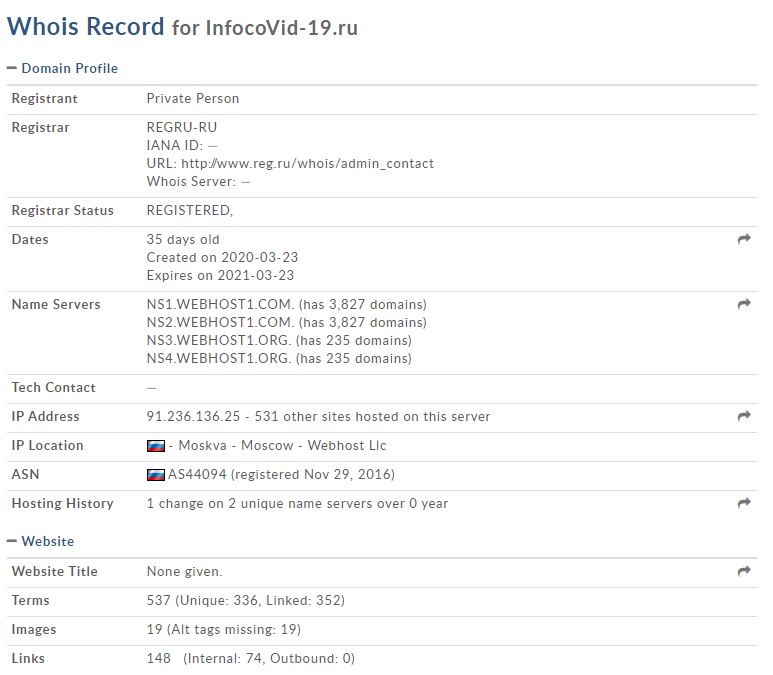 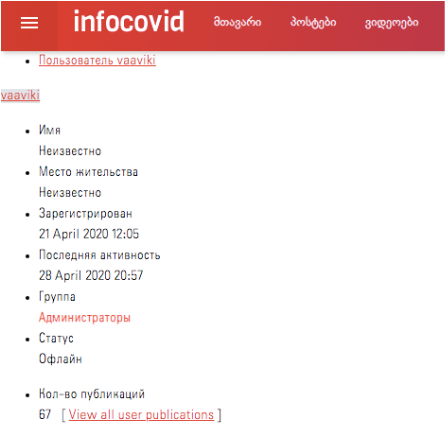 Information on infocovid-19.ru is spread by Vaaviki profile; search of information with the name Vaaviki on Google search engine results in two clickbait sites where information is placed by the same profile. These are: news.mins.ge and viki.ge. News.mins.ge contains various conspiracies about coronavirus and 5G as well as information published by vaaviki. 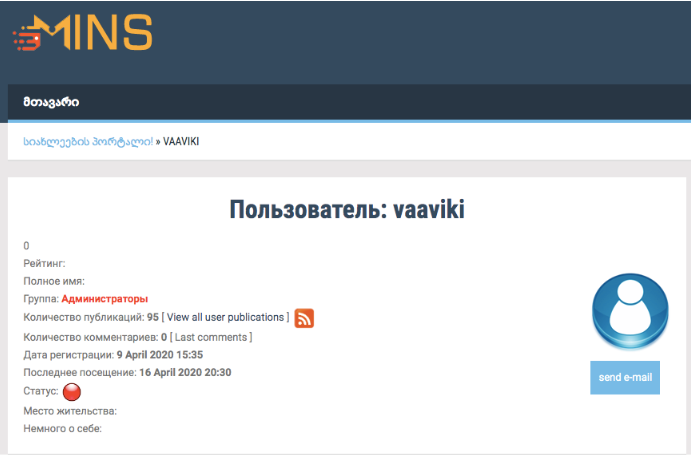 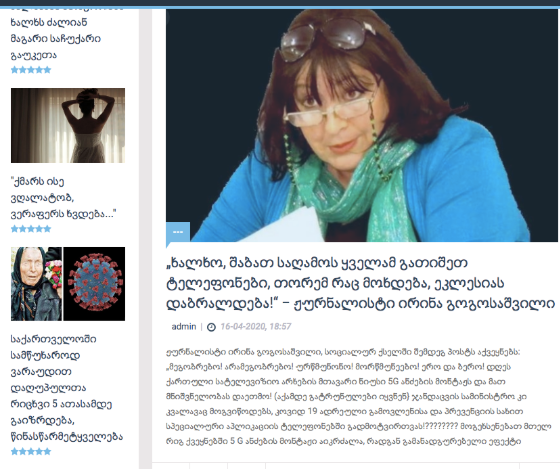 viki.ge and infocovid-19.ru have almost identical interface. On this site, which was registered on 28 January 2020, materials are published by vaaviki profile. It also includes a fake news claiming that a Harvard University professor was arrested for engineering COVID-19. 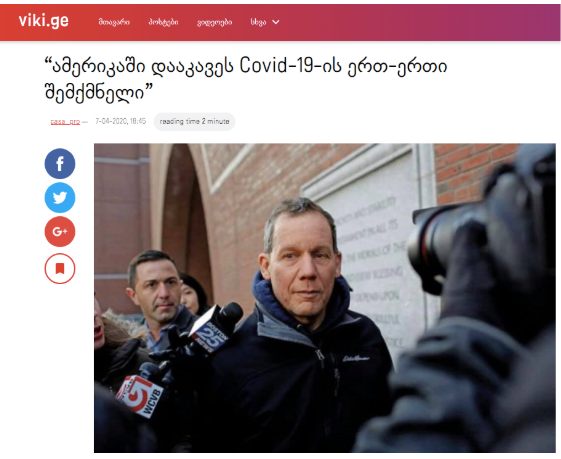 The owner of abcnews.com.ge and timesnews.ge is Giorgi Melkadze who is also mentioned as a partner in the W-O-M company, a legal name of timesnews.ge. According to the data of Public Registry, this organization was established by Koba Vasadze on 7 April 2015; the changes was made on 13 December 2016, when Koba Vasadze transferred 40% of his shares into the ownership of Giorgi Melikidze for free.  Giorgi Melikidze is also mentioned in GM Corporation LLC. 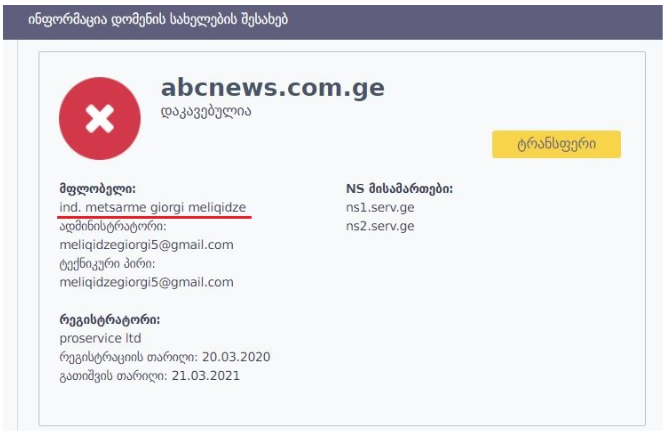 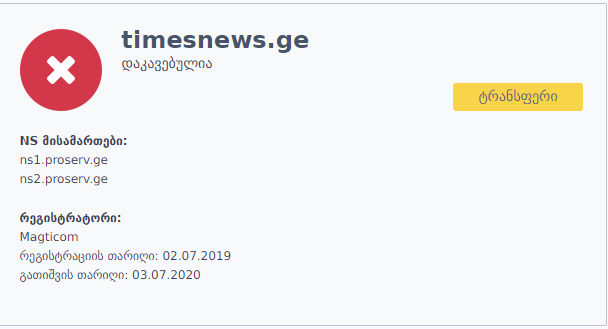 Arxi.ge was registered on 22 April 2020 and its owner is sabir kiarimov who also owns two clickbait sites gadatsema.ge and gasagebia.ge. 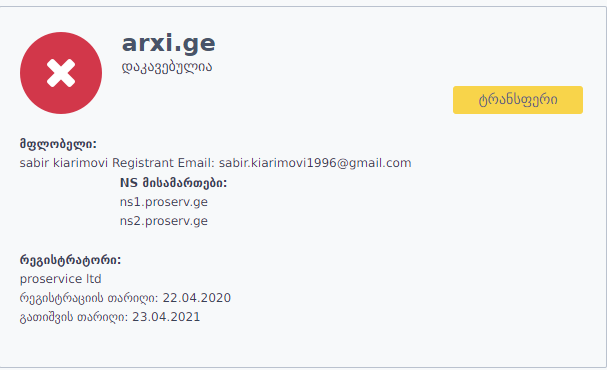 Geomediapress.ge was registered on 4 August 2016 and the owner is Eter Baladze. 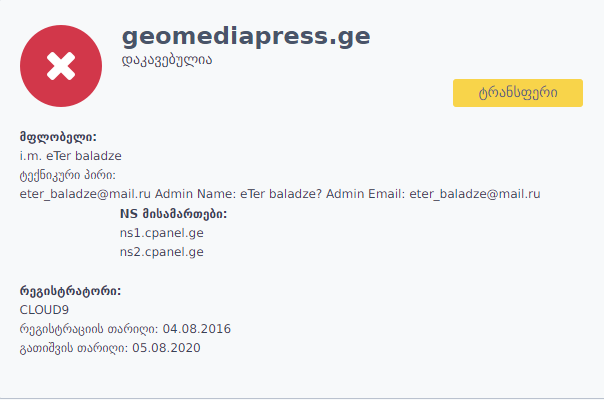