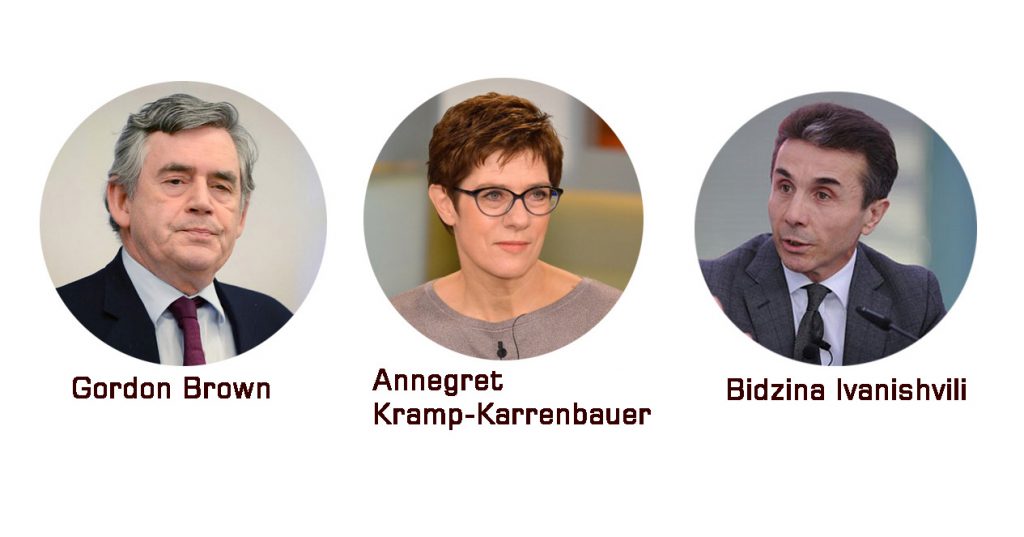 On January 19, 2019, Pirveli news agency released a Facebook post by political analyst, Ghia Abashidze, where he claims that while Freedom House expresses concern about informal governance in Georgia, it has no questions towards “Europe’s old democracies” about identical problems persisting there. He names a number of European states, among them Poland, Germany and Great Britain as the examples of European informal governance.

Ghia Abashidze, political analyst: “When Freedom House researcher, Nate Schenkkan [I found a cascade of his inaccuracies doubtful] and his associates talk about informal governance in Georgia, why do not they have similar concerns about Europe’s old democracies?” 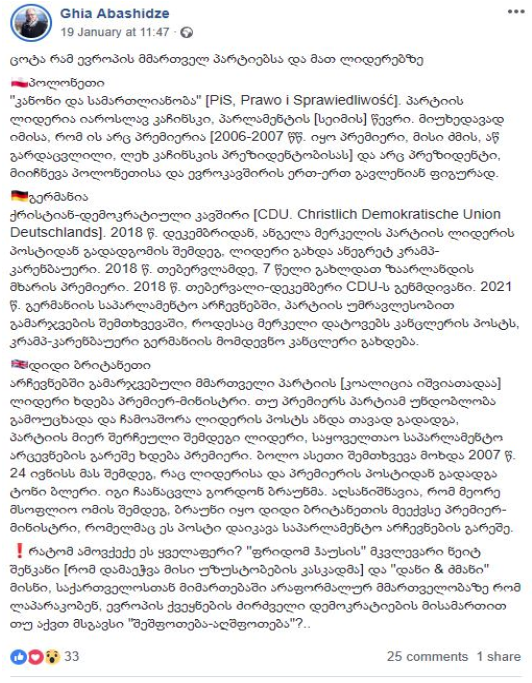 This statement and comparison are absurd, because unlike Ivanishvili, the rulers of Germany and Great Britain represent concrete institutions (Prime Minister, Chancellor); they act within the framework of law; they have been granted legitimacy through the elections and are accountable to the public and state institutions. Mentioning Poland in the context of the West’s double standards is a lie, because the 2018 report released by Freedom House criticizes Poland for informal governance.

What does informal governance mean?

Informal governance means a type of governance without any legal and institutional framework for decision making process. Personal links and influences play a decisive role in political decision making. Informal ruler governs the country and exerts influence on political decisions without being accountable to the public. This, in turn, creates a threat to democracy and rule of law.

In Germany, the Chancellor is elected by an absolute majority of the Members of the Bundestag (Parliament), who are elected by voters in a general election. After consulting with each of the parliamentary groups in the Bundestag, the Federal President then proposes a candidate for the office of Federal Chancellor.

Annegret Kramp-Karrenbauer, the leader of the center-right Christian Democratic Union, whom Abashidze names as an example of possible informal ruler, will become the Chancellor if her candidacy is approved by the coalition formed in the Bundestag following the elections.

The Chancellor acts within the framework of law. His/her powers are defined by the Basic Law for the Federal Republic of Germany. The Chancellor is accountable to the Bundestag elected by people. The Bundestag may pass a vote of no confidence in the head of government and dismiss the Chancellor. To do this the Members of the Bundestag must simultaneously elect a successor.

The British Government is normally composed of parliamentarians winning the elections, and according to political tradition, the Prime Minister becomes the leader of the winning party.

Gordon Brown named by Ghia Abashidze as an informal ruler was a Member of Parliament from the Labor Party since 1983. In 2007, at the moment of Tony Blair’s resignation as Prime Minister, Brown served as Chancellor of the Exchequer. After Blair resigned and the Labor Party lost its leading position, Brown was elected as the party leader and became the Prime Minister. This process cannot be considered a sign of informal governance, because Gordon Brown became the leader of the winning party. According to political tradition, leader of the winning party is entitled to determine who will be the country’s Prime Minister till the next parliamentary elections.

The prime ministerial powers and his/her relationships with the Government are regulated by the Ministerial Code. As part of accountability process to the Parliament, the Prime Minister answers questions from MPs in the Commons every sitting Wednesday.

The House of Commons is entitled to pass a vote of no confidence in the entire cabinet that may entail the formation of an alternative government.

Ghia Abashidze equals Gordon Brown, who served as British Prime Minister from 2007 to 2010, and Annegret Kramp-Karrenbauer, the leader of the Christian Democratic Union, who will become the Chancellor only if her candidacy is approved by the Bundestag, with Bidzina Ivanishvili’s informal governance. At the moment, when Georgia became the target of Freedom House’s criticism due to Ivanishvili’s informal governance in the country, unlike the above mentioned leaders, Ivanishvili did not held any political position.

In the section on functioning of government, the report released by Freedom House criticizes Poland for informal government influence.

According to the organization’s 2018 report, Poland’s score declined from 4 to 3 due to the informal government influence exercised by PiS [Prawo i Sprawiedliwość] chairman and parliamentary deputy Jarosław Kaczyński.

Freedom House:  “During the year[2017], PiS chairman and Sejm member Jarosław Kaczyński continued to play a dominant role in the government despite his lack of any official executive position. He was seen as the driving force behind a December 2017 government shuffle…”

The European Union also criticizes Poland for taking undemocratic steps and jeopardizing the rule of law that was later confirmed by the statements adopted by the European Parliament in 2019 and 2017.

To illustrate Bidzina Ivanishvili’s informal governance in Georgia, Freedom House notes that since 2012, key ministerial portfolios have been held by Ivanishvili’s associates, and neither Ivanishvili himself nor the Georgian government has made a secret of the fact that Ivanishvili has played a “consulting” role.

Freedom House: “Informal governance remains one of the key impediments to Georgia’s democratic functioning. It is widely understood that the billionaire former prime minister and GD founder Bidzina Ivanishvili exerts informal influence on decision-making processes inside the government… It should be noted that informal governance did not start with Ivanishvili; it has long been an integral part of Georgia’s political system. However, since Ivanishvili resigned from the premiership in 2013, the nature of decision-making within the existing framework of Georgian informal governance has gone entirely beyond the limits of the law”.