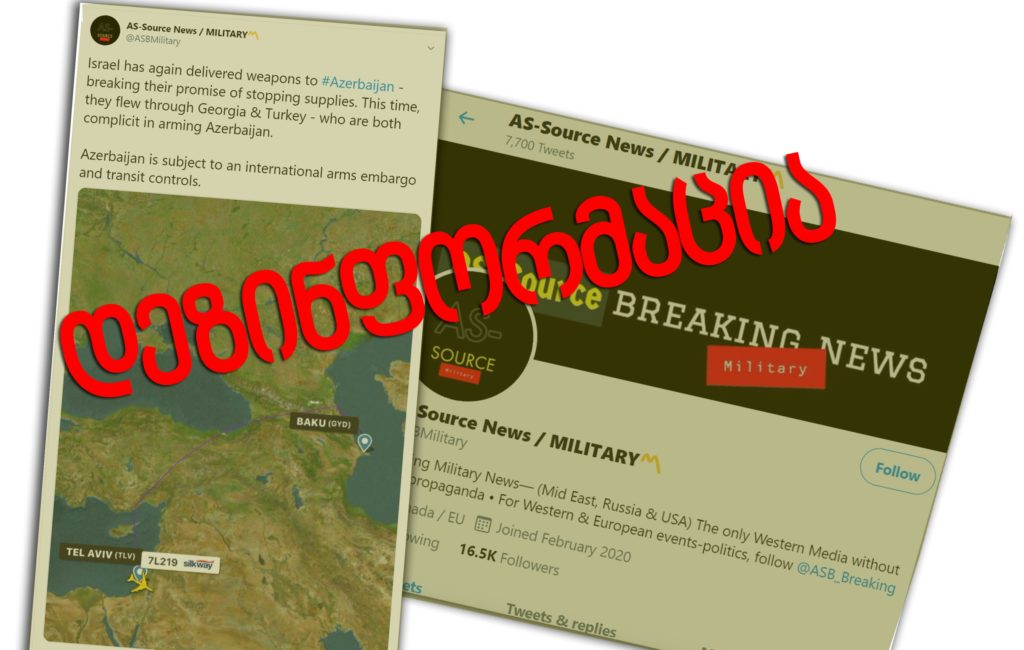 On October 11, AS-Source News / MILITARY posted on its Twitter account that Israel has again delivered weapons to Azerbaijan by air. According to the Twitter post, the flight was conducted through Georgia and Turkey. The author accuses both Georgia and Turkey of being complicit in arming Azerbaijan. The post is accompanied by a photo showing the route of flight 7L219 conducted by the plane belonging to Azerbaijani cargo airline Silk Way Airlines from Tel Aviv to Baku. As of October 13, the Twitter post has 195 retweets and 294 likes. 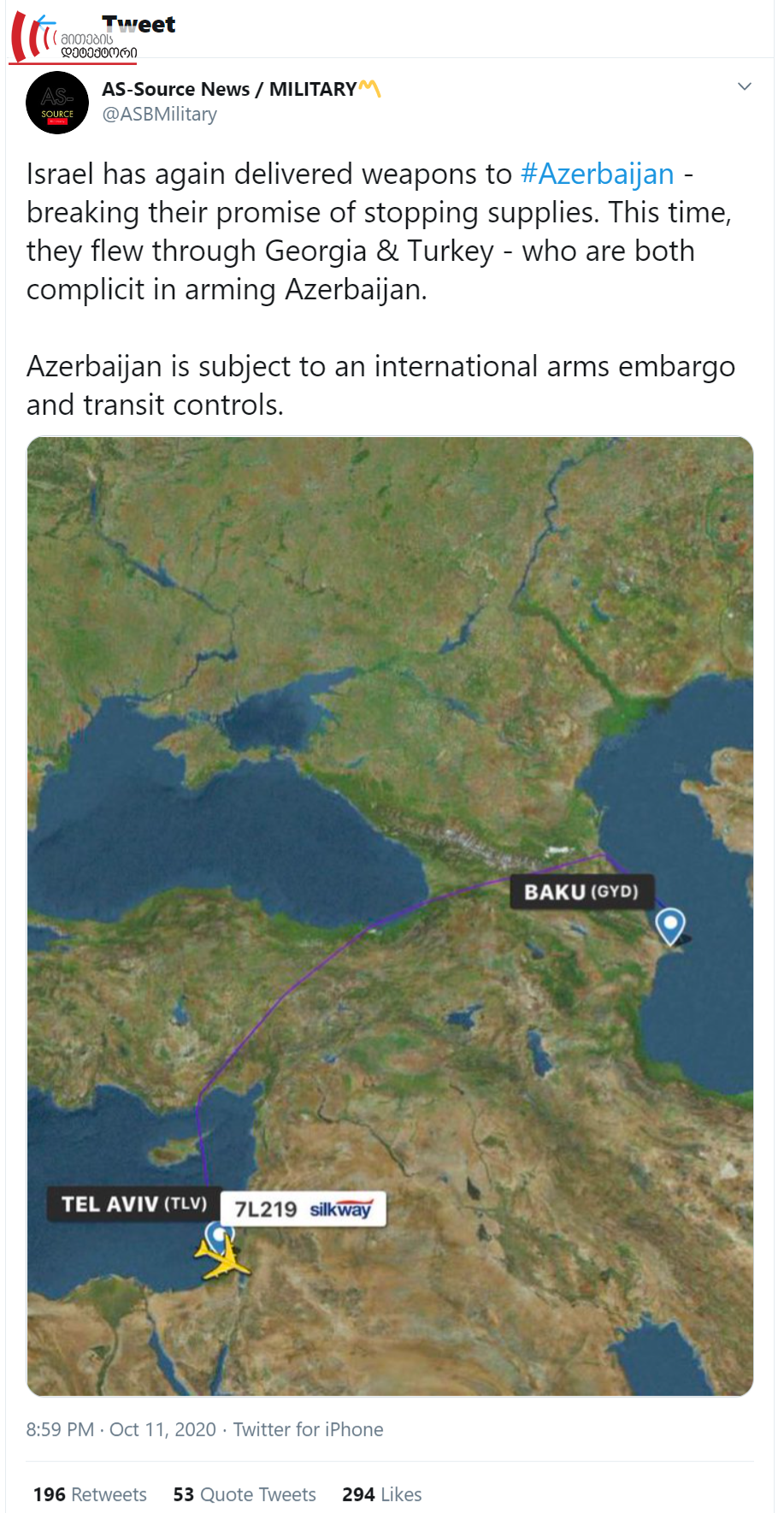 The Twitter post as if the plane belonging to Silk Way Airlines allegedly conducted flight 7L219 to deliver weapons from Israel to Azerbaijan through Georgia lacks evidence. 1. Flight 7L219 is conducted from Tel Aviv to Baku on a regular basis; 2. The plane is civilian; 3. It crossed not only the Georgian and Turkish air borders, but also the Russian air border.

Verification of flight history for Silk Way Airlines flight 7L219 in flightradar24 database has revealed that the plane belonging to Silk Way Airlines really conducted flights from Tel Aviv to Baku on October 6 and October 7; however, the flights with the same registration number are conducted on a regular basis. flightradar24 is a global flight tracking service providing real-time information about aircrafts. The website also provides information about the completed and scheduled flights. 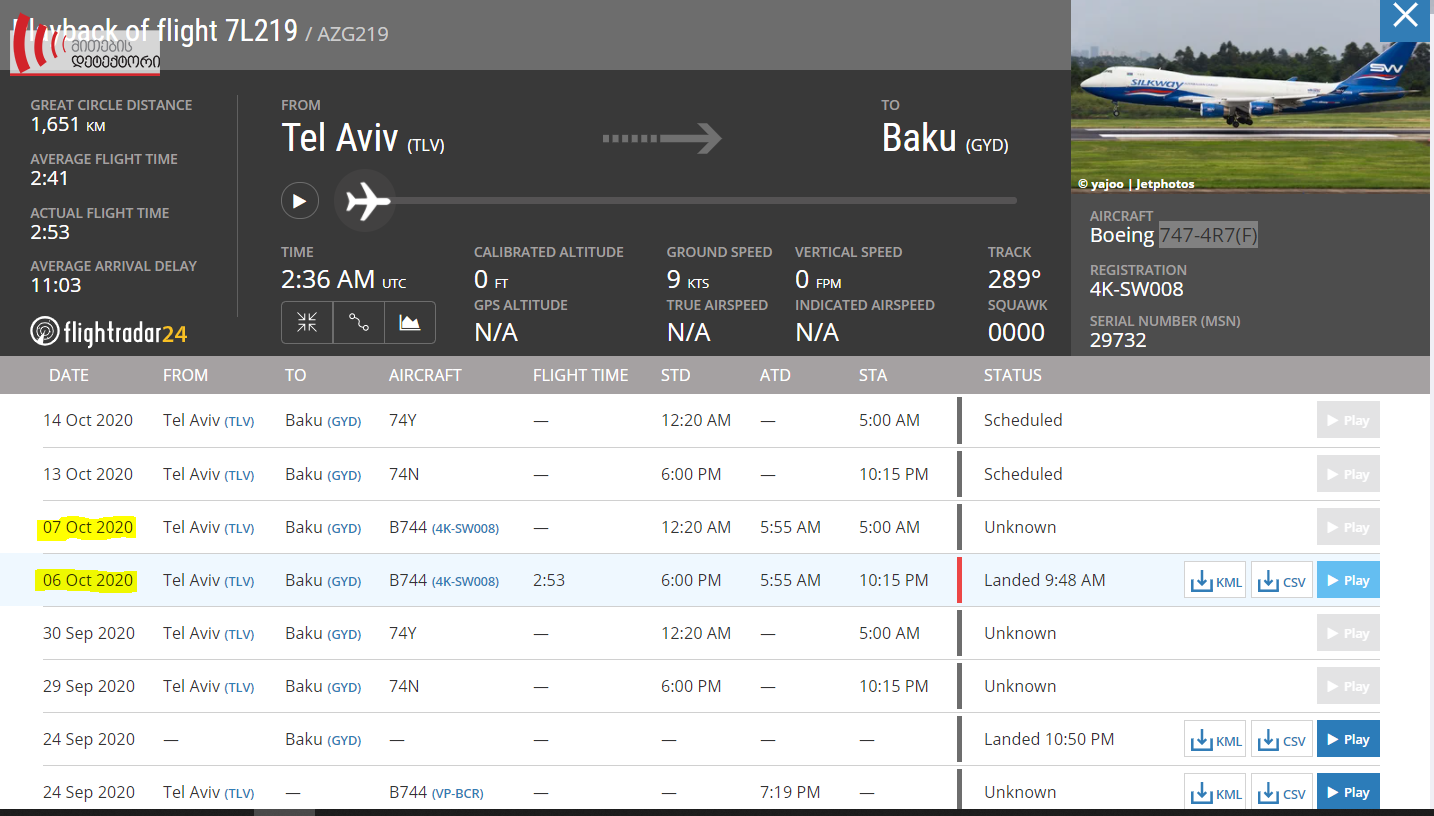 According to flightradar24, flight 7L219 is regularly conducted from Tel Aviv to Baku over the past year, at least once every six or seven days. The same flight is also scheduled for October 13 and October 14. Thus, there is nothing special in the flight mentioned in the Twitter post.

The plane that conducted flight from Tel Aviv to Baku also conducts flights to other countries of the world, including China, Germany, USA, South Korea, Turkey, Georgia, etc. According to its registration number, it is a civilian plane. 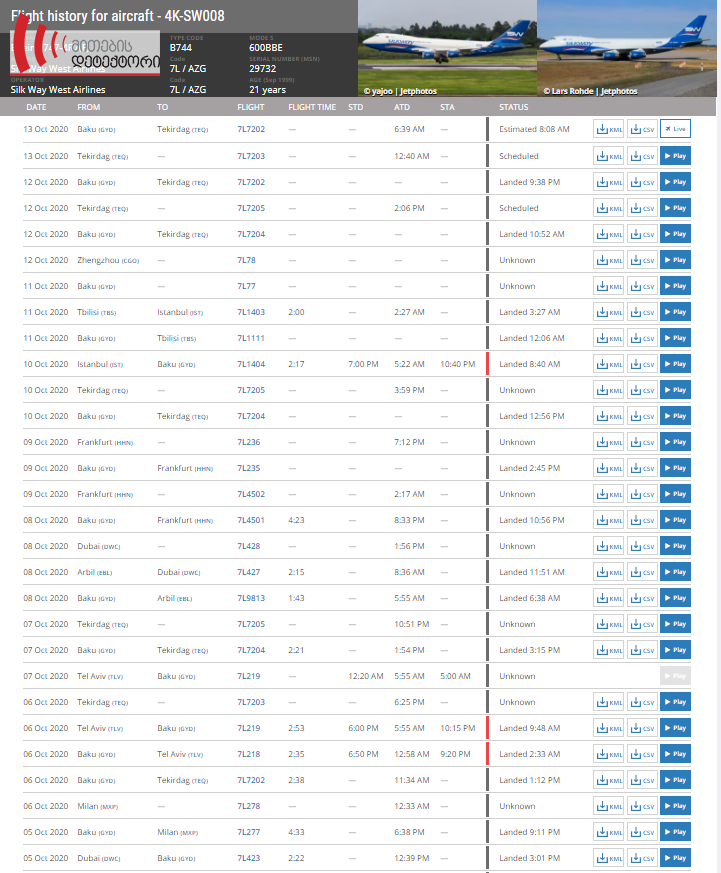 According to the U.S. Central Intelligence Agency (CIA), all aircraft engaged in international air navigation bear appropriate nationality marks. Since 1947, the International Civil Aviation Organization (ICAO) has managed code standards and their allocation. Azerbaijani aircraft registration code is 4K, while flight 4K-SW008 conducted from Tel Aviv to Baku, according to its registration number, is civilian.

The plane flying from Tel Aviv to Baku on October 6 crossed not only the Georgian and Turkish air borders, but also the Russian air border

The author of the Twitter post claims that Georgia and Turkey are both complicit in arming Azerbaijan and in this specific case, the plane conducted a flight through their airspaces. However, the flight trajectory data show that Boeing 747-4R7(F) crossed not only into the Georgian and Turkish airspaces, but also into Russian airspace. After leaving the territory of Georgia, the plane arrived in Baku through flying over Russia’s Republic of Dagestan, near Makhachkala. 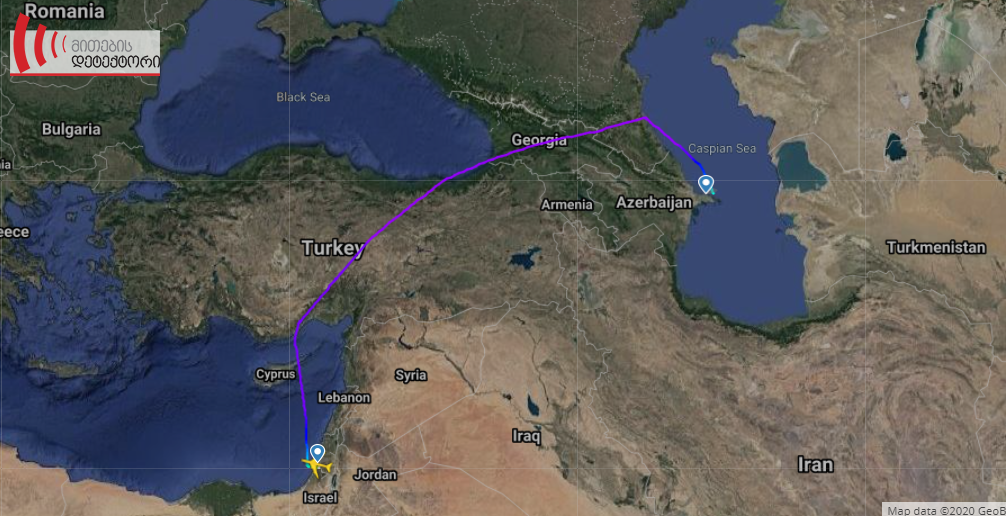 Who spreads information about arms transit to Azerbaijan through Georgia?

The Twitter account  AS-Source News / MILITARY was created in February 2020. It portrays itself as the only western alternative source of mainstream media. According to the information provided on its Twitter account, AS-Source News / MILITARY mainly covers military news from Middle East, Russia, and the United States. It is the only Western Media without MSM propaganda. It has 16,400 followers on Twitter. 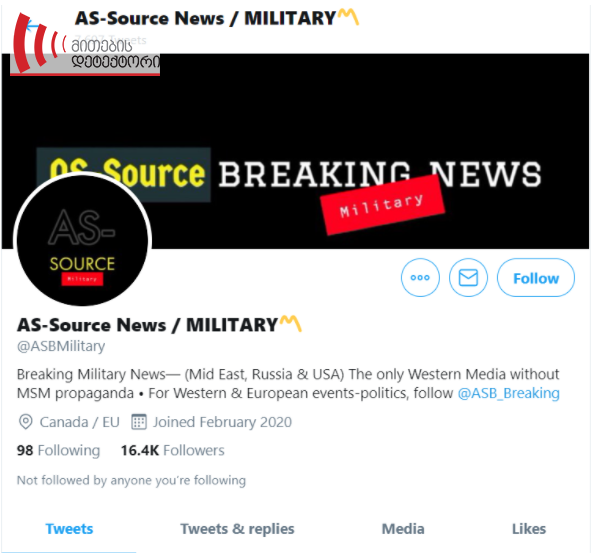 The Twitter account intensively posts about Nagorno-Karabakh conflict, frequently trying to discredit Azerbaijan. It refers to Kremlin-affiliated Sputnik and Russian war correspondents as the sources. 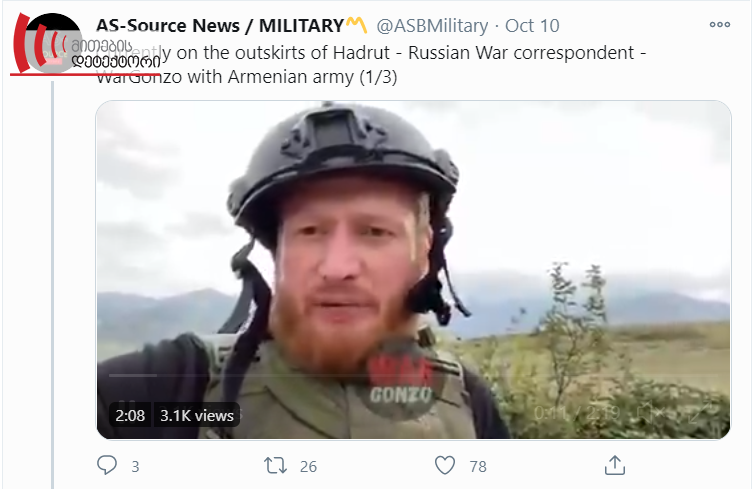 In 2017, Bulgarian investigative journalist, Dilyana Gaytandzhieva, who is one of the sources of disinformation against Tbilisi-based Lugar Lab, accused Silk Way Airlines of delivering weapons to terrorists

On July 4, 2017, Bulgarian newspaper Труд published an article, according to which Azerbaijan’s Silk Way Airlines transported weapons with diplomatic clearance for Syria, Iraq, Afghanistan, Pakistan and Congo. Dilyana Gaytandzhieva was the author of the article.

She claimed that documents implicating Silk Way Airlines in arms supplies were sent to her and these files included correspondence between the Bulgarian Ministry of Foreign Affairs and the Embassy of Azerbaijan to Bulgaria with attached documents for weapons deals and diplomatic clearance for overflight. She also noted that the United States, Saudi Arabia, the United Arab Emirates, Turkey and other countries were involved in the deal. The Azerbaijani Foreign Ministry and the Azerbaijani Embassy to Bulgaria denied the reports. Silk Way Airlines also denied the reports as unreasonable, noting that in some cases of cargo transportation, diplomatic channels were used based on diplomatic clearance that does not mean diplomatic immunity. Silk Way Airlines noted that Dilyana Gaytandzhieva was dismissed shortly after the article was published. Noteworthy that 80% of Труд newspaper is controlled by pro-Russian oligarch and Bulgarian MP Delyan Peevski. According to Bulgarian media reports, the companies affiliated with Delyan Peevski were involved in the implementation of the South Stream project, which aimed to transport natural gas from Russia through Bulgaria to Europe and which was actually seen as a rival to the Nabucco pipeline project.

Dilyana Gaytandzhieva is a Kremlin and Hezbollah-affiliated Bulgarian journalist, who is one of the sources of Kremlin’s disinformation against the Lugar Lab. Her interest towards Georgia is largely driven by the Central Public Health Reference Laboratory (CPHRL), the so-called Lugar Lab. The latter is frequently targeted by the Russian government.

Noteworthy that in connection with the renewed hostilities between Azerbaijan and Armenia in Nagorno-Karabakh, Georgia decided to temporarily suspend the issuance of permits on transiting military cargo through its territory by air or land in the direction of both countries. Transportation of civil cargo will continue.

On October 13, Deputy Foreign Minister of Georgia, Lasha Darsalia denied reports about military cargo transit through the territory of Georgia, saying that the flights taking place in the airspace of Georgia are of humanitarian and civilian nature only and fully comply with ICAO standards. He slammed the reports on military cargo transit as manipulation. Darsalia also noted that specific carriers and cargo holders are responsible for observing all principles of international law and abstaining from the abuse of humanitarian corridors. He added that Georgia will adequately respond to all possible violations.