Church as a separate tool for Russian influence 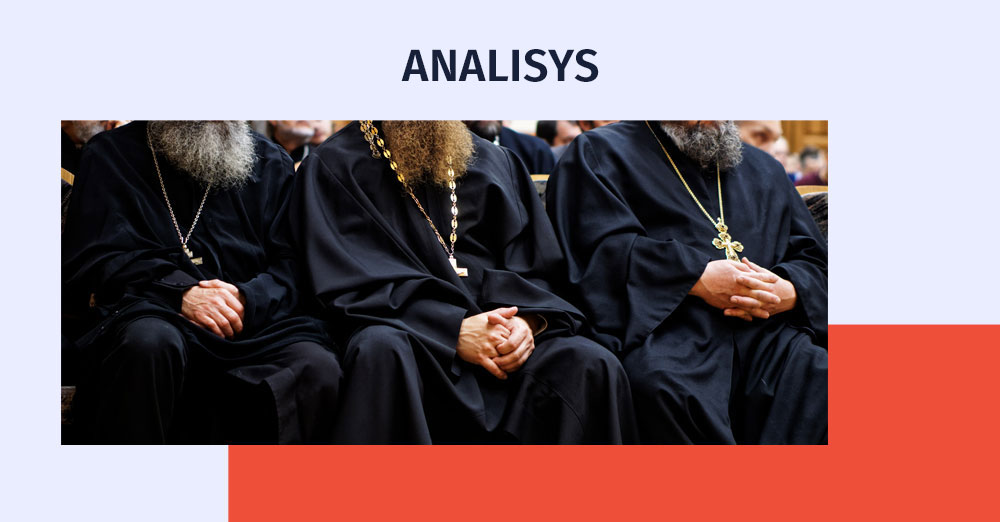 The Georgian Orthodox Church (GOC) has become the center of attention after the alleged state security files on clergy were leaked on September 12. The alleged leaked documents that were covered by the Georgian media outlets revealed the supposed personal information of clergymen, including past activities and connections to Russia.

The previous mapping research analyzed the church as a separate tool for Russian influence and mentioned a number of GOC representatives, including high-ranking members of Holy Synod, expressing pro-Russian sentiments. The list can be expanded after the alleged leaked files, given the fact that a folder named “pro-Russian orientation” includes a dossier of 15 clerics, among them high-ranking GOC members. According to the alleged leaked files, they have either close ties to the Russian Orthodox Church (ROC) or connections to Russian businessmen. Some of them are assumed to be cooperating with Russian intelligence services. Archpriest Andria Jaghmaidze, the head of the public relations department, neither confirmed nor denied the information provided in alleged leaked files. He stated that the GOC unites around 3 thousand clerics; hence several examples do not mean the patriarchate has extensive ties to Russia. According to him, the files do not establish Shio Mujiri’s ties to Russia, who is Patriarch’s locum tenens. The files reportedly said that some GOC clerics believe the Catholicos-Patriarch Ilia II appointed Metropolitan Shio Mujiri as the Patriarchal Locum Tenens unilaterally, in violation of the canonical law, with pressure from the Russian Church. As mentioned in the files, the critical clerics also believe that Shio Mujiri’s appointment was in the interest of his friend Levan Vasadze, an ultraconservative party leader who is linked to Russia.

Noteworthy, Metropolitan Nikoloz Pachuashvili, who in November 2020 visited Moscow and during the sermon with the representatives of the Russian clergy, stated: “No one and nothing can break our unity.” According to the alleged leaked files, in exchange for $30 000, he provided details about the ongoing processes in the Georgian Patriarchate to a Russian citizen, such as the personal meetings of the Catholicos-Patriarch and also information about the Lugar Laboratory, a Georgian based American public health research center that became a target of Russian disinformation. Metropolitan Nikoloz confirmed his close relationship with the Russian citizen Lolita Danilina but denied taking money for information. Pachuashvili has not been vocal about his pro-Russian views to Georgian media, but he recently supported ROC in its dispute with Constantinople Patriarchate over the Autocephaly of Ukraine. In a virtual meeting with the ROC department for external church relations, Metropolitan Nikoloz stated that the Holy Synod is under socio-political pressure, holding them accountable for pro-Russian stance; however, he asserted, the Holy Synod is pro-Orthodox, and all must return to the agreed principle of Consensus. As mentioned in the previous mapping research, theologians consider the Holy Synod’s position on autocephaly of the Orthodox Church of Ukraine to be a result of Russian influence.

GOC attitudes towards the Kremlin manifested itself in the incident that, according to the alleged State Security Files, happened back in 2019: Patriarchal locum tenens Shio Mujiri and Metropolitan Teodore Tchuadze fired an altar boy due to criticism of Russian President Vladimir Putin on a social network.

Another event assessed by theologians as unacceptable and pro-Russian was a service conducted in Russian (Church Slavonic) language in the main patriarchal cathedral of the Georgian Orthodox Church, Svetitskhoveli. The Ukrainian clergy who were hosted by the GOC are subordinate to the Moscow Patriarchate that is against the autocephaly of the Ukrainian Orthodox Church.

When it comes to anti-liberal and anti-western rhetoric, some members of GOC act together with pro-Kremlin and extremist groups. Their tandem was evident at the July 5 Pride March event, which was cancelled after the violent anti-LGBTQ+ groups took to the streets and attacked Media representatives. Archpriest Spiridon Tskipurishvili, who attended an anti-LGBTQ+ rally, called on the protesters for violence. “Not that you should say no to violence, quite the opposite, you are obliged to use violence for your homeland!” – stated Archpriest Spiridon.

One month prior to the Pride March, a hate speech campaign was cultivated on social media containing homophobic and anti-western messages. The most prominent narratives included statements that “The West imposes homosexuality/plans a gay revolution,” “Russia protects traditional identities,” “Suppression of Pride = Protection of the Church and orthodoxy.” Anti-Pride messages were spread by far-right, Kremlin-tied, and religious actors; Archpriests Spiridon Tskipurishvili, Shalva Kekelia and Giorgi Razmadze were the most active among clerics.

In sum, the issue of GOC having close ties with the Russian Orthodox Church has resurfaced after the alleged leak of the personal information secretly collected by the state security service of Georgia. The alleged files exposed several instances of individual clergymen cooperating with Russian intelligence services or engaging financially with Russian businessmen. Moreover, the recent developments in the country further demonstrated the ideological congruence between the GOC and far-right radical extremists. Noth the GOC and the violent far-right groups encouraged violence during the July 5 events and voiced identical statements, blaming the West for planning a gay revolution and, at the same time, portrayed Russia as the sole defender of traditional values.

The full version of the research “Russian and Chinese Influences in Georgia – 2021 Update“ prepared by the Media Development Foundation (MDF) in partnership with the Atlantic Council’s DFRLab, Civic Idea, and Georgia’s Reforms Associates (GRASS) is available here.

This Report has been produced under the two-years project implemented by the Prague-based European Values Center for Security Policy in Georgia.