Channel One Russia Disseminates Information About the “Yellow Card” Manipulatively 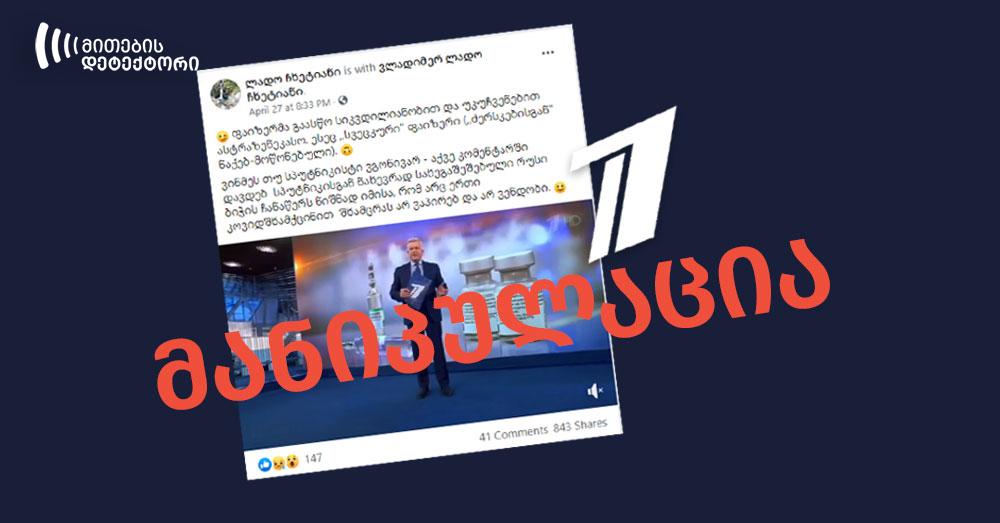 On April 27, a Facebook account Lado Chkhetiani published a TV report by Channel One Russia. In the description of the video, Chkhetiani wrote that the Pfizer vaccine surpassed the AstraZeneca one with death rate and side effects. Similar information is mentioned in the report, which also notes that the British media and government are silent about this scandal. A publication on the web page of an organization, founded by the former Prime Minister of the United Kingdom, Tony Blair is cited as the source of this information in the report. 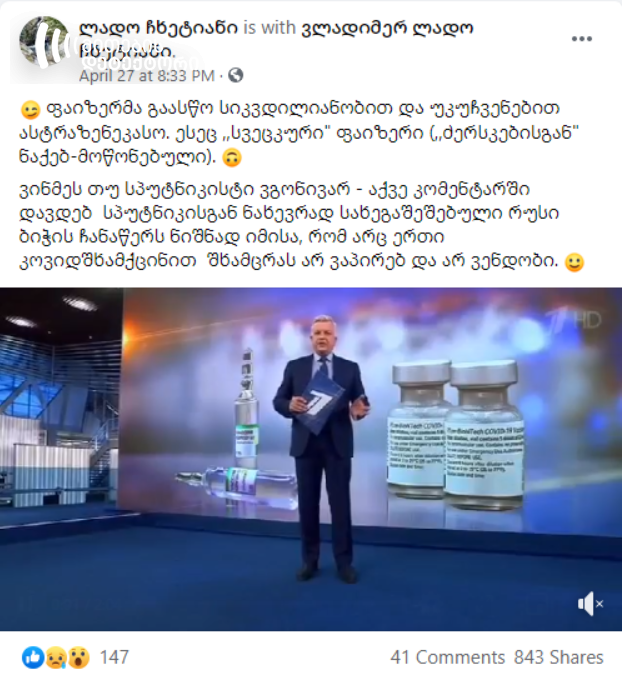 The information in the post and the report is out of context, as it is based on the data from the “yellow card” system. Neither the post, nor the report mention this. Any user can enter data to this system. The program does not automatically confirm whether any of the vaccines was the reason for death. Therefore, using the data from the “yellow card” system for determining the death rate is inaccurate.

The source of the report aired on Channel One Russia is the publication on the website of the Institute for Global Change, founded by Tony Blair, who was the Prime Minister of the UK in 1997-2007. The report mentions that the Pfizer vaccine far surpassed the AstraZeneca vaccine by side effects and death rate. This is labelled as a “world-scale scandal” in the report, which also claims that the story has been covered neither by the British media, nor the Government of the UK has made any statement. AstraZeneca vaccine is then mentioned as a counterweight to this, as it has been extensively covered by the media.

The report misses an important detail – it has no mention of the fact that the statistics of the post-vaccination side effects are based on the data, entered by citizens to the “yellow card” system of the United Kingdom. It also does not explain how this system functions.

The publication on the webpage of the Institute for Global Change notes that the decision of various countries to stop the use of AstraZeneca vaccine is wrong and unfair, because, according to the “yellow card” data, the Pfizer vaccine has been followed by more side effects and deaths than the AstraZeneca vaccine.

The “yellow card” system aims to account the outcomes of the monitoring and the side effects of vaccines, drugs, and other medical substances. Side effects of the vaccines are also accounted in this system, but the side effects may include any health problem that emerges after the vaccination, although there is no evidence that the problem is necessarily caused by the vaccine.

Both the vaccinated and non-vaccinated individuals can enter data into the system, and it does not determine whether the side effect is caused by the vaccine. A group of medical experts reviews the data entered into the system. Therefore, the death rate, determined based on the “yellow card” scheme, is inaccurate.

Medicines and Healthcare products Regulatory Agency of the United Kingdom (MHRA) has received a total of 594 notifications on deaths following the vaccination. They studied every case and determined that the fatal cases had no connection with the vaccines. The majority of the fatal cases were recorded among the elderly people and the people with underlying medical conditions.

See Myth Detector’s article on the topic:
How does UK’s Yellow Card Scheme Work and How Reliable are Vaccination Data?