By Whom and When was the Motto “Glory to Ukraine! Glory to the Heroes” Coined? 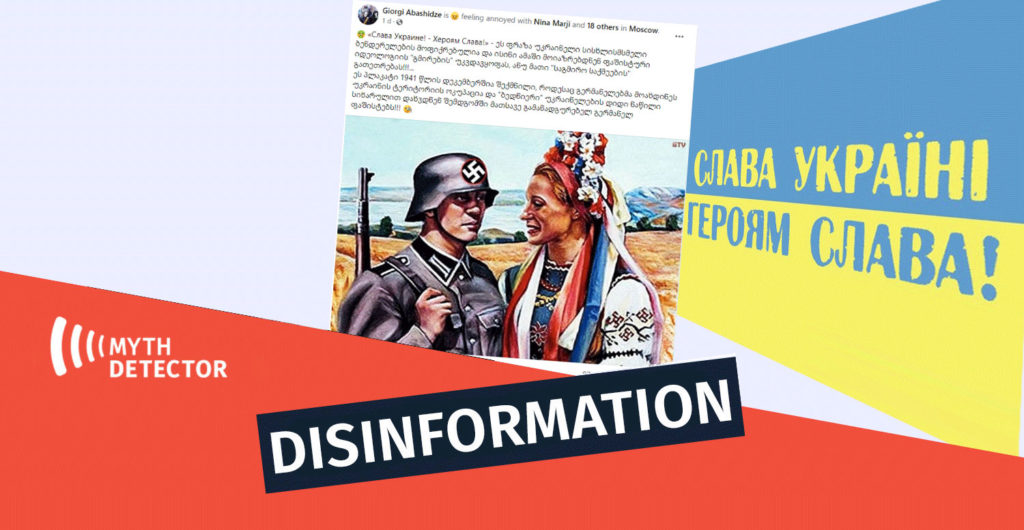 On April 9th, Facebook user Giorgi Abashidze published a post about the famous Ukrainian slogan “Слава Україні! Героям слава!  (“Glory to Ukraine! Glory to the Heroes”). According to the description, the slogan was coined by the “bloodthirsty” Banderites, implying the immortality of fascist heroes. The post is accompanied by a poster depicting a woman dressed in Ukrainian national clothes and a Nazi soldier. According to the description, the poster was created in December 1941 after the German occupation of Ukraine. 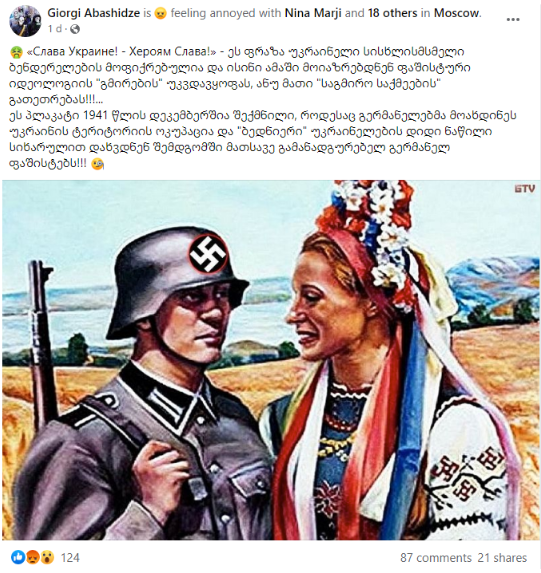 Giorgi Abashidze’s post contains two false claims. In fact, 1) both parts of the expression “Glory to Ukraine! Glory to the heroes! ” were used way before Stepan Bandera, in the late 19th century and the 1920s, by political parties and unions fighting for Ukraine’s independence. 2) The published poster was not created in December 1941, as it belongs to the contemporary Ukrainian artist Igor Pereklita.

We find the words “Glory to Ukraine” in the 1860 poem “До Основ’яненка” by the famous Ukrainian poet Taras Shevchenko. 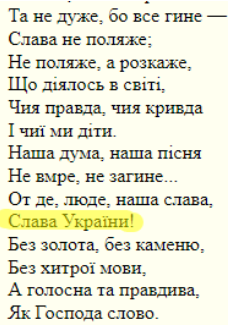 According to Ukrainian historian Yuri Yuzich, “Glory to Ukraine,” as a slogan, was actively used by Ukrainian students living in Kharkiv in the late nineteenth century. It was here that the first modern Ukrainian political party, The Revolutionary Ukrainian Party (RUP), emerged in the Russian Empire, demanding Ukraine’s independence, and whose members used the term to communicate with each other.

The term “Glory! Glory to Ukraine!” can also be found in an article from the newspaper “New Rada,” published on March 15th, 1917, devoted to the sitting of the Rada of Ukraine. 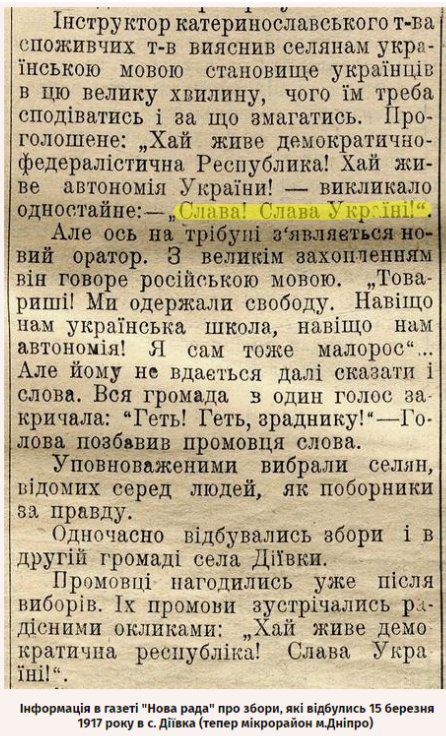 In 1920, in the already independent Ukrainian army, “Glory to Ukraine” was recognized as the official form of salute at the legislative level. 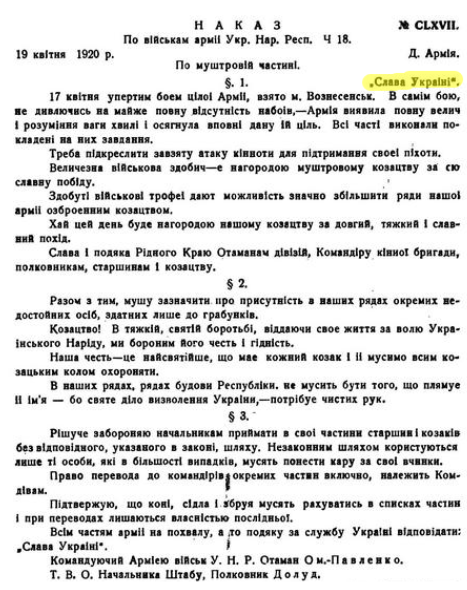 The expression “Glory to Ukraine! Glory to the heroes!” was also actively used in the 1980-90s. In 2014, the slogan became a symbol of the Revolution of Dignity, and in 2018, the term to officially greet the Armed Forces of Ukraine was established at the legislative level.

According to the Atlantic Council, first Soviet and then Russian propaganda actively sought to portray Ukrainian patriots as fascists, trying to label the expression “Glory to Ukraine! Glory to the heroes!” as the Ukrainian version of “Heil Hitler”.

For more on Stepan Bandera and related Kremlin disinformation, see the material of Myth Detector:

The post is accompanied by a poster that, according to the description, was created in December 1941 after the occupation of Ukraine by Nazi Germany. In fact, the poster is modern. During the visit of Russian Patriarch Kirill to Ukraine in 2010, it was listed at the author’s exhibition “Kill a Communist Fascist” by Ukrainian contemporary artist Igor Pereklita. 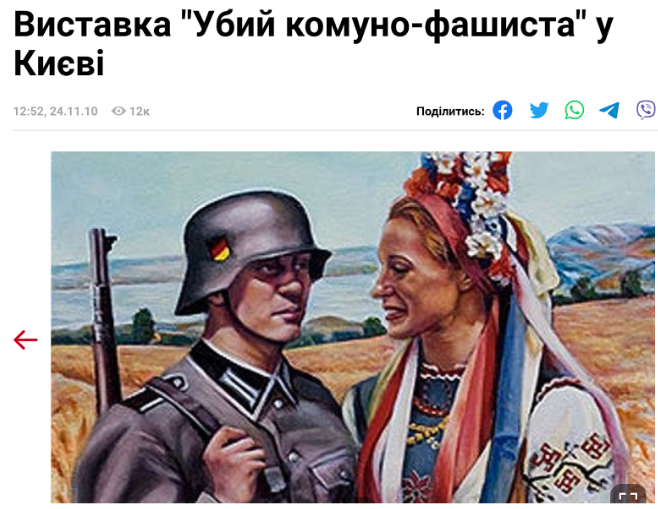 At the same exhibition, the author also used other paintings with Nazi and Soviet symbols.

These and other paintings by Pereklita were also presented at the 2009 Kyiv Modern Art Festival. 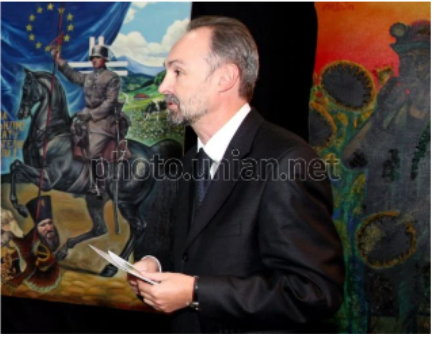 At that time, the works with Nazi symbols were criticized by a certain part of the society. Since then, the canvas has been published on various Russian-language websites with different captions aimed at discrediting Ukrainians. 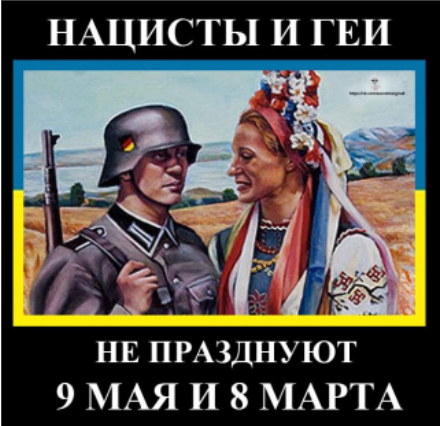