“British Bastards” or the Human Cost of War – What Was Discussed During Olena Zelenska’s Interview with the BBC? 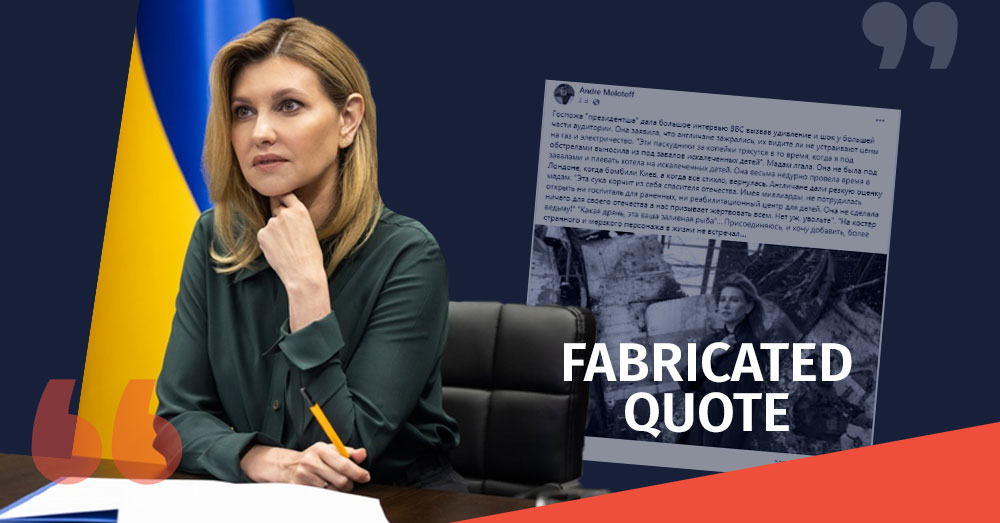 On September 6th, Russian-langiage Facebook user “Andre Molotoff” published a post regarding the interview given to the BBC by the First Lady of Ukraine, Olena Zelenska. According to the description, Zelenska claimed that the British “have gone way overboard.” The post quoted the first lady saying, “These [British] bastards were shaking  over pennies while I was pulling injured children from the rubble of bombings.” The author of the post criticizes Zelenska, saying that she never brought anyone out of the ruins. Also, according to the text, Olena Zelenska was having a good time in London during the bombing of Kyiv and returned after the stabilization of the situation in Ukraine. The post’s author writes that Zelenska’s statement was met with many critical comments from the British, including comments such as “this bitch pretends to be the saviour of the motherland” and “burn the witch.” 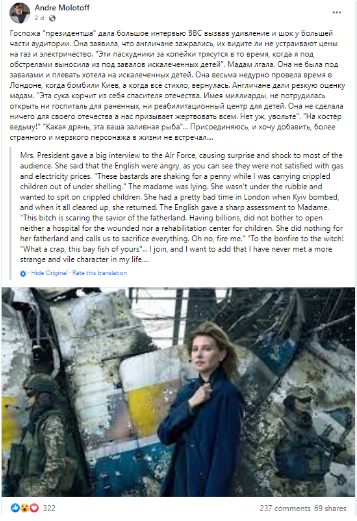 The quote of Olena Zelenska used in the post is fabricated. In fact, the first lady of Ukraine never even mentioned the word “British Bastards”, nor did she say that she took the injured children out of the rubble. In an interview with the BBC, Zelenska said in response to a journalist’s question that the economic crisis also affects Ukraine. However, Ukrainians count the dead along with the increased prices.

On September 4th, an interview with Olena Zelenska aired on the BBC program “Sunday with Laura Kuenssberg”. The host of the program spoke to the First Lady in Kyiv. 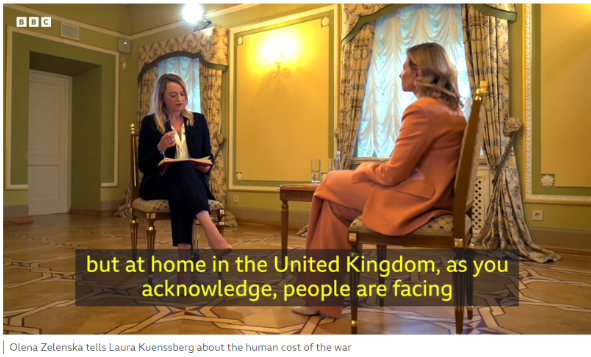 It was during this interview that Zelenska, according to the BBC, talked about the human cost of war. According to Zelenska, people should understand that the price increase is not Ukraine’s fault but Russia’s actions. After that, the journalist asked the first lady what she would say to those Britts who had to accept heavy cuts due to increased prices. The first lady said that the increase in prices also affected Ukraine, although the country had to also fact the number of its dead citizens:

Laura Kuenssberg, BBC Journalist: “There is no comparison to the suffering of people here, but at home, in the United Kingdom, as you acknowledge, people are facing very painful choices because of the soaring cost of energy that’s going to make things very tough for people. What would you say to our viewers watching at home, who feel very sorry for what’s happening to your people, but also who feel desperately worried about their ability to pay bills, to keep a roof over their head. What would you say to them?

Olena Zelenska, the First Lady of Ukraine: “Well, of course, I understand the situation is very tough, but let me recall that at the time of the Covid-19 epidemic, and it’s still with us when there were price hikes. Ukraine is affected as well. The prices are going up in Ukraine as well. But in addition, our people get killed. So when you start counting pennies in your bank account or your pocket, we do the same and count our casualties.

Olena Zelenska never said during the interview given to the BBC that “British Bastards would count their pennies while she herself was pulling children out of the ruins.” The interview was also published on Zelenska’s official Instagram page. In the description of the video, Zelenska additionally noted that undervaluing the problems of others cannot be permitted, and friends of Ukraine have the right to worry about their own situation, although the economic crisis is the result of Russian aggression.

Olena Zelenska, the First Lady of Ukraine: “I believe that one should not devalue anyone’s problems. Friends of Ukraine have the right to worry about their bills. But this is a manifestation of Russian aggression, the economic dimension of this war. This is exactly what I mean when I say that the aggressor attacked Ukraine and the rest of the world. The enemy is bombing our cities, affecting the cities of the EU and Great Britain economically. That is why we and the free world are on the same side of the front. That is why we need a victory as soon as possible – a joint victory.”

The post published by Andre Molotoff also states that Olena Zelenska was having a good time in London during the bombing of Kyiv and returned to Ukraine only after the situation calmed down. In fact, on February 25th, the day after the start of the Russia-Ukraine war, President Volodymyr Zelenskyy announced that he himself was staying in Kyiv, while his family remained in Ukraine, and they were not going to leave the country. There is no evidence that Olena Zelenska left the country.

Disinformation related to the family of Zelenskyy has been fact-checked by the “Myth Detector” in the past as well. See: