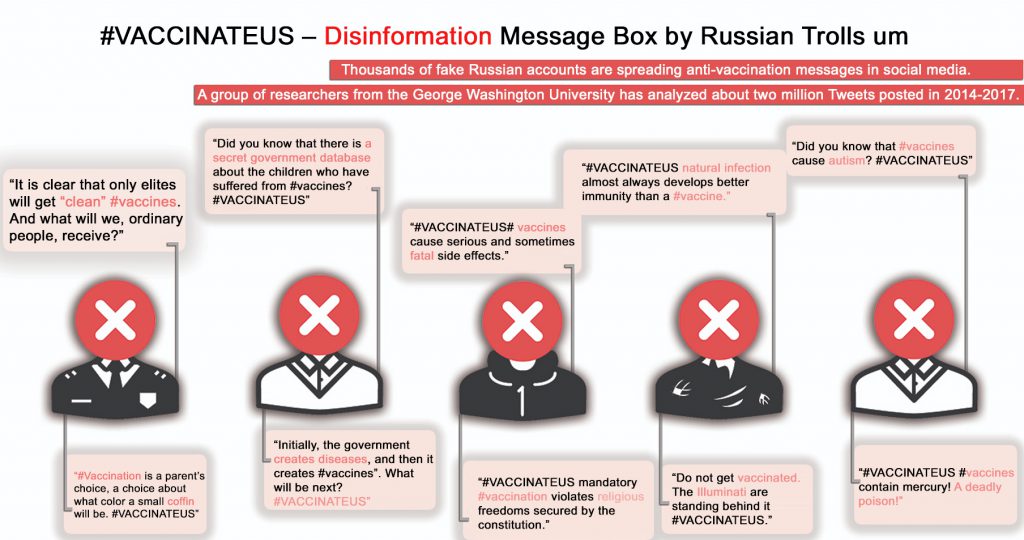 On April 15, 2020, an online edition Georgia and World published an article headlined “What are the links between the coronavirus deaths and BCG?” The article reviews one of the hypotheses about effectiveness of Bacillus Calmette–Guérin (BCG) vaccine against the novel coronavirus as well as the advantage that the post-Soviet countries may have, once the hypothesis is proved, due to the mandatory vaccination carried out during the Soviet period.

Georgia and World: “Ukraine stopped purchasing Russian vaccines following Euromaidan. As a result, today the epidemiological situation is critical there and it is dangerous even for its neighboring countries. Ukraine has gradually moved to the Danish strain, which can cause a lot of complications.”

Although BCG vaccination remains a cornerstone against tuberculosis (TB), a range of different live attenuated BCG vaccine strains are used worldwide. According to the comparative study released by Infections Diseases Society of America in 2019, BCG-Denmark is much effective in fighting open tuberculosis and its concurrent meningitis, than the Russian BCG strains. A group of scientists carried out BCG vaccination to healthy newborns in Guinea-Bissau. Two parallel groups (about 3,000 newborns per group) were vaccinated with BCG-Denmark and BCG-Russia. The six-week observation has revealed that BCG-Denmark was more immunogenic than BCG-Russia, while the mortality did not differ. Thus, unlike traditionally spread opinions, the study proves the opposite, claiming that BCG-Russia has no special advantage over other strains.

2. When and why did Ukraine stop purchasing Russian vaccines?

Ukraine’s immunization programme lists BCG among mandatory vaccines. According to Ukraine’s immunization profile developed by WHO regional office for Europe, in 2014-2015, Ukraine faced a significant shortage of BCG vaccines and vaccination rate was below 40% in that period. In June 2015, Ukraine’s Health Minister Alexander Kvitashvili said that Ukraine would cease the purchase of BCG vaccines from Russia due to the “doubtful quality” of vaccines purchased from the country over the past three years. Simultaneously, to fill vaccine shortage, the Ukrainian government ordered 100,000 doses of anti-tuberculosis vaccine to Danish and Polish producers. It also applied to the United Nations Children’s Fund (UNICEF) for assistance in purchasing high quality BCG strains due to BCG shortage in the country. With UNICEF’s assistance, in August 2016, Ukraine received 2, 5 million doses of anti-tuberculosis vaccine, increasing the number of vaccinated population to 75% in 2016 and 84% in 2017.

3. Disinformation and anti-vax movement in Ukraine

The universal immunization policy comes across significant difficulties and challenges in Ukraine, including low vaccination rates. According to the World Health Organization, less than 50% of target population was involved in the 2014-2015 universal immunization programme in Ukraine, whereas 95% or higher vaccination rate is needed to achieve herd immunity.

According to UNICEF, global cases of measles surged to alarmingly high levels in 2017-2018 with Ukraine leading top ten countries with the most cases. Along with shortages in vaccine supply, the organization cites Ukraine’s anti-vax movement and increased mistrust towards the government’s immunization programme as the reason behind the outbreak. According to the 2019 study of Wellcome Trust on how people around the world think and feel about science and major health challenges, only 29% of Ukraine’s population agree that vaccines are safe.

Experts link the intensification of anti-vax sentiments in Ukraine and other Eastern European countries to the coordinated spread of disinformation by Russian Troll Factory in social networks and online media outlets. According to the study released by American Public Health Association in May 2018, Russian trolls and bots have intensified anti-vaccination cyber campaign in social media since 2014. As part of the study, the researchers gathered thousands of Twitter posts about vaccination, as well as public discussions with the participation of Russian trolls. Moreover, 50% of opinions voiced by bots and trolls involved anti-vaccination disinformation. The majority of identified trolls are linked to St. Petersburg Internet Research Agency that is “a troll factory financed by the Russian government.

The role that bots and trolls play in anti-vax propaganda repeats a classical scenario – they find anti-vaccination audience; one part of bots enters into debate with pro-vaccination arguments, while the other part proves the opposite. Eventually, such fake debates strengthen public mistrust towards vaccination and add new messages to already existing superstitions or disinformation. The most popular disinformation promoted by Russian trolls anti-vax propaganda is that vaccines cause autism and better to get immunity for infectious diseases by getting sick.  As it turned out, not only ordinary users of social networks, but also people with medical education believe that it is true. In case of Ukraine, almost 60% of the medical students from Bogomolets National Medical University (the oldest and largest university in Ukraine) reported that they believe vaccines may cause autism and almost 30% believe that it is “better” for a child to get immunity by getting sick.

In 2019, the World Health Organization announced anti-vax campaign as one of the main threats to global health. 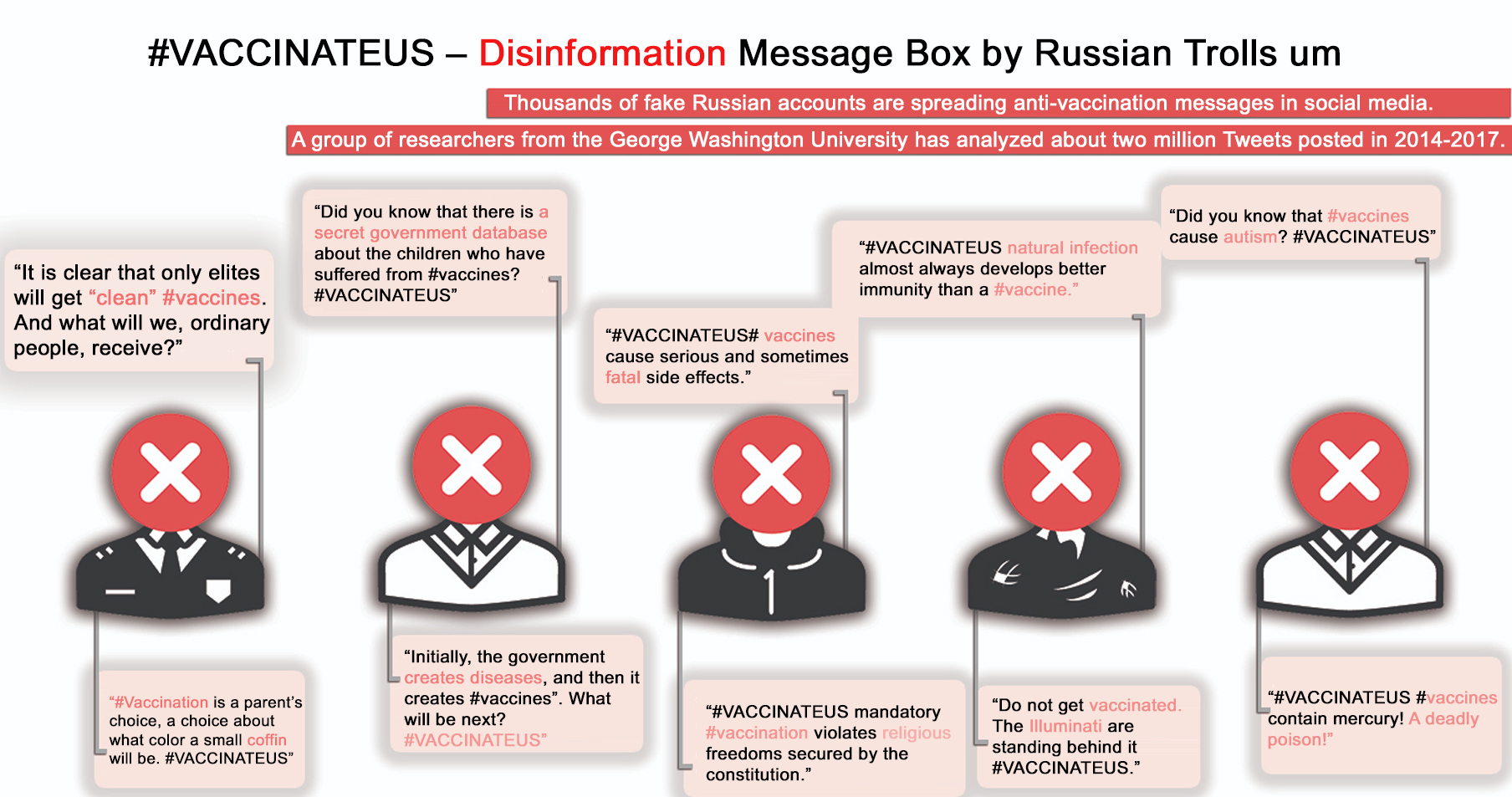