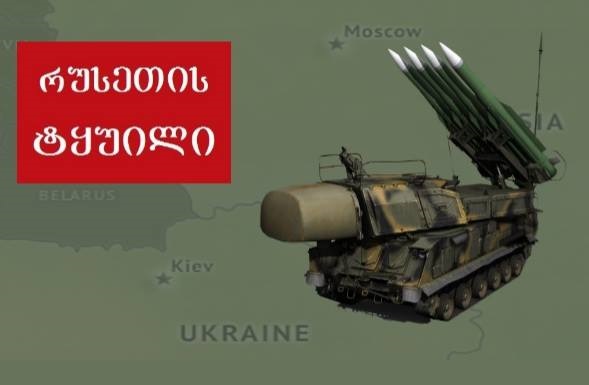 On April 27 a web portal Georgia & World, and later on May 5 Sakinformi disseminated information according to which BBC documentary contradicts official reports into the crash of Malaysian Boeing 777 on Ukrainian territory on July 17, 2014 and blames Ukraine for downing the plane.

Reports claiming that BBC questions the official report by the Dutch Safety Board and blames Ukraine were disseminated not only by Russian (Sputnik, TASS) and pro-Kremlin Georgian (Sakinformi, Georgia & World) media outlets, but they also appeared in Western media (Daily Mail, Sunday Express). BBC has criticized British Sunday Express for its claiming that a forthcoming BBC documentary will say that Malaysian Airlines MH17 was shot down by a Ukrainian jet. Just on the contrary, the documentary questions such version of events.

British documentary television series “Conspiracy Files: Who Shot down MH17” was aired on May 3. On April 25, BBC ran an article discussing what really happened.

Actually, the film discusses the official report by the Dutch Safety Board, on the one hand, and conspiracy theories surrounding the crash, on the other. Just a part of these conspiracy theories, which is based on Russian sources, rather than on multilateral versions, is covered by propagandistic media and separate publications and it does not reflect BBC’s efforts to offer a comprehensive, fact-based story to the public.

Below there is detailed information about the official version of investigation reflected in BBC documentary as well as two alternative Russian versions.

According to the official report by the Dutch Safety Board, the crash that occurred in the eastern part of Ukraine, near the Ukrainian-Russian border, was the result of the detonation of a warhead. The weapon used was a 9N314M-model warhead carried on the 9M38-series of missiles, as installed on the Buk surface-to-air missile system. The detonation occurred near the cockpit tearing the plane into several pieces. The Dutch side supposes that the missile has been launched by either Russian militaries or pro-Russian rebels, who targeted a wrong plane. This version is further reinforced by a telephone conversation intercepted by the Ukrainian Security Service, in which one of the rebels informs a man purportedly from Russia’s GRU (military intelligence agency) that the rebels mistakenly downed “what they thought was a Ukrainian plane.” Russia is accused of supplying these models of weapons to rebels.

Russian Version No 1 and Counterarguments

According to this version, Malaysian Boeing 777 (Amsterdam – Kuala Lumpur, MH17) was shot down by the Ukrainian Air Force.

The representatives of Russia’s Defence Ministry said on July 21, 2014 that Ukrainian fighter jet SU-25 shot down the civilian airplane adding that Russian military radars detected another aircraft in close approach to MH17 before the crash.

To reinforce the Russian version, Yana Erlashova, one of Russia Today’s reporters, staged an experiment with the help of the Russian Air Force and demonstrated that Su-25 is capable of reaching 10 000 meters (MH17 flight altitude during the crash).

The documentary provides the following counterarguments to counterbalance the above mentioned version:

Speaking about another plane briefly visible on Russian radars, David Gleave, a former air accident investigator, explains that when an aircraft breaks up in mid-air, sometimes it continues to transmit radar data on the way down. It may even change direction if it loses its tail.

There are some technical arguments which deride the Russian Defence Ministry’s claims that a Ukrainian Su-25 shot down MH17. Nick de Larrinaga, European editor of IHS Jane’s Defence Weekly, says the idea is “absolute nonsense.” According to him:

1.Su-25 is a close air-support aircraft, designed to operate just above ground level, attacking tanks and other vehicles.

2.It is not designed to operate at high altitude (10 000 meters) and shoot down aircraft. This heavily armored fighter jet can reach that altitude only by discarding its weapons. And firing a weapon at this altitude would cause it to stall.

4.Su-25 fighter jet, armed with air-to-air missiles, can hit targets within a range of three miles.

The Russian version is also debunked by the official report released by the Dutch Safety Board, according to which MH17 was damaged by the Buk system’s 9M38M1 missile carrying a 70kg high-explosive fragmentation warhead.

Four months after the crash Russia’s Channel One broadcast a satellite photograph. This time, Russian version was slightly altered and the blame for crash was put on Mig-29 instead of Su-25. Russian media claimed that the photograph was taken at the exact moment a Mig-29 fired a missile at MH17. Eliot Higgins, a former office worker turned blogger, who set up an online investigation website called Bellingcat, and his volunteer investigators, sensed the photos were fakes. They said that the fighter jet actually looked more like a Su-27 fighter than a Mig-29. However, the photograph had one important flaw. “It would be about four miles long based on the perspective between the camera and the ground,” says Higgins, “or it would be a normal-sized aircraft that was 300m away from the satellite.”

Five months after the crash, a witness emerged claiming to have worked in the Ukrainian Air Force. The witness claimed that he had loaded air-to-air missiles on Captain Vladislav Voloshin’s Su-25 plane on 17 July and that when the plane returned to base the missiles were gone.

Russian Version No 2 and Counterarguments

According to the second Russian version, MH17 was shot down by a Ukrainian Buk missile system.

Russia’s Channel One released a satellite photograph showing a Ukrainian army Buk missile launcher, first at a military base, and then – on the day of the crash – at a front-line Ukrainian army position near the village of Zaroshenskoye.

See infographics at the following link. 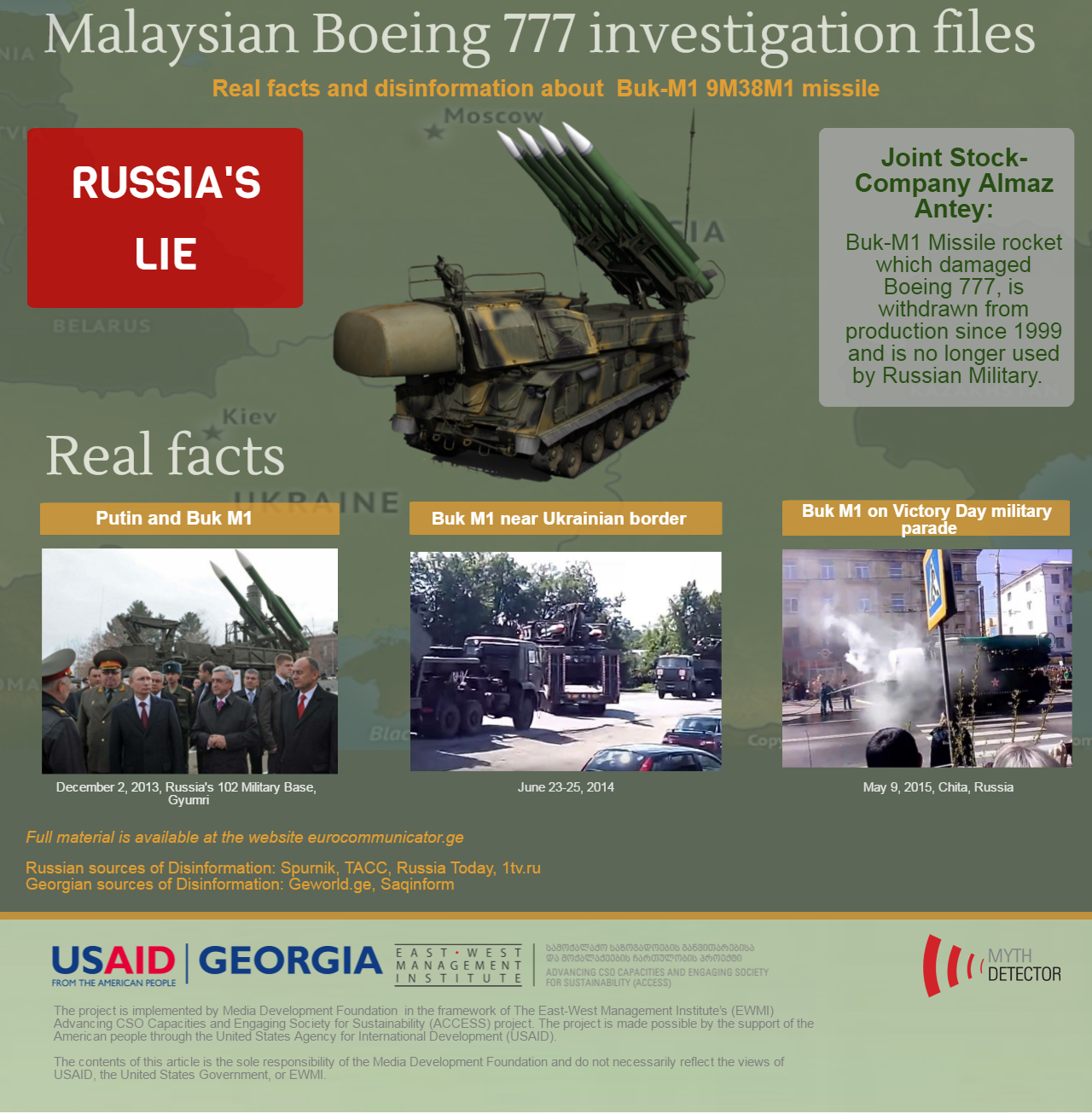 This opinion is annulled by two counterarguments:

1.A satellite image from American imaging firm Digital Globe that was taken on the day of the crash clearly shows the missile launcher still there on July 17.

2.On July 17 the village of Zaroshenskoye was controlled by pro-Russian rebels instead of Ukrainian militaries.

Russian manufacturer of the Buk missile, Almaz-Antey said that 9M38M1 missile is no longer used by the Russian army. It went out of production in 1999 and the missiles produced during that period were handed over to foreign clients. The company also claimed that missiles are still in use in the Ukrainian army.

To check these claims, Bellingcat conducted an online investigation. By means of video recordings and photos posted in social networks they ascertained that on June 23-25, 2014, a month before the Malaysian plane crash, the convoy of Russian 53rd Brigade moved from the city of Kursk towards the Ukrainian border. The Buk seen in the convoy was just equipped with 9M38M1 missiles. On August 16, 2014, Reuters’ photographer took a photo of a Russian military vehicle in the Rostov district, loaded with 9M38M1 missiles. There are other factors too that prove the Russian army still operates 9M38M1 missiles after 1999.

1. On December 2, 2013 Russian President Vladimer Putin visited the Russian 102nd military base in the Armenian town of Gyumri. The photo taken during the visit shows Putin standing in front of the Buk system equipped with 9M38M1 missile.

2. On May 9, 2015 the Buk system equipped with the same 9M38M1 missile was passing through Lenin Square in the Siberian city of Chita as part of the Victory parade celebrations, when it suddenly caught fire. Relevant photos and videos immediately spread through the Internet.

During the military operations in summer 2014, pro-Russian rebels did not have military air force; instead they had effective air defense system. On July 14, 2014 (three days before the MH17 crash) they shot down a Ukrainian military transport aircraft Antonov-26 at an altitude of 6,500 m.

Steven Pifer, a former U.S. Ambassador to Ukraine, speaks in BBC documentary about the form of Russian propaganda. He argues that major Russian TV networks “are operating as an arm of the Kremlin and designed to put out a Russian propaganda line.” He says the goal is “to put out lots of different theories to raise smoke, to raise dust and to raise confusion and hopefully persuade people that there is no truth here.” Moreover, one of the forms of propaganda to partially cover partly true information is an effective means of manipulation, creating unambiguous ideas among the people receiving information.

This article has been prepared according to BBC’s article Conspiracy Files: Who shot down MH17? and the documentary of the same name.