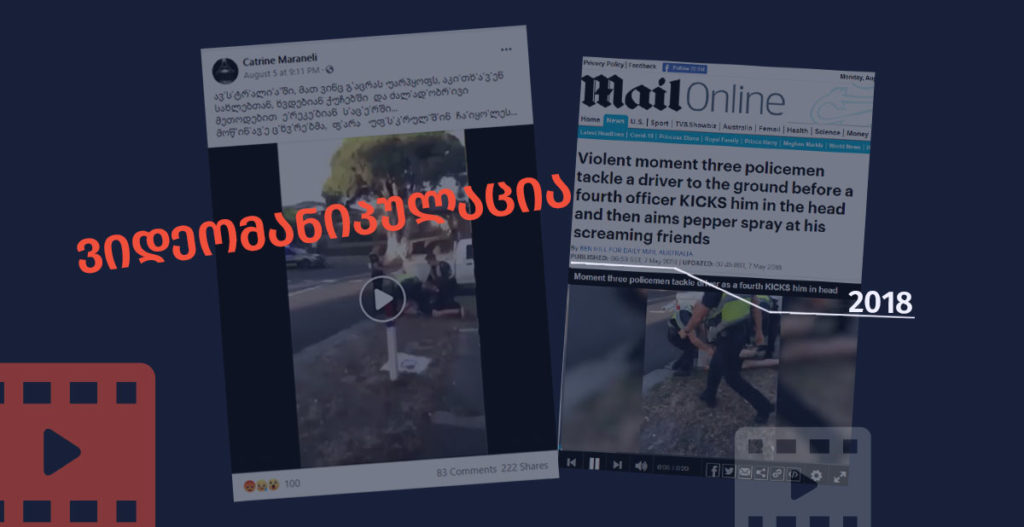 On August 5th, 2021, Facebook account Catrine Maraneli has published a video using the following description: “In Australia, the ones who refuse to get vaccinated are being visited home, stopped on the streets and are violently transferred to vaccination centres… The frontrunner sheep have dragged the herd into the abyss with them.” The video showcases scenes where police officers are trying to arrest a man. As of August 9th, the video has accumulated 222 shares and more than 3 thousand likes.

The post of Catrine Maraneli is disinformation and represents a manipulation of a video footage from 2018 showcasing an entirely different event. In reality, the video displays the arrest due to the ownership of drugs and has nothing to do with the vaccination process. Not to mention, vaccination is voluntary in Australia.

The post is manipulative and seeks to create the wrong impression that people are forcefully vaccinated in Australia. Based on the Invid search tool, the video displays a completely different event. The actual video was taken in the suburb of Seaford, Melbourne, in May 2018 by a witness, and it shows how three policemen tackle a driver to the ground.

According to Melbourne Police, the 22-year-old man has been charged with a number of offences, including four counts of conduct endangering life and serious injury, driving in a dangerous manner and at speed, resisting arrest and assaulting police and possession of methamphetamine. The men had allegedly driven on the wrong side of the road and sped at almost 130km/h an hour before officers swooped on him. He faced court on May 23rd, 2018.

The sister of the 22-year-old man was among the witnesses, who has recorded the incident and spoke out about the extreme violence. The video shows that a fourth officer kicks the man in the head and then aims pepper spray at his screaming friends. Police said the professional standards command reviewed the video and referred the matter to IBAC, the Independent, Broad-based Anti-corruption Commission.

Vaccination is voluntary in Australia and is only carried out in medical centres.

The coronavirus vaccines are not mandatory in Australia for the majority of the population. According to the local government’s decision, only the caregivers of the high-risk elderly patients and quarantine hotel staff will be asked to take the vaccine starting mid-September.

For more information on this topic and similar disinformation that people are forcefully vaccinated in Australia, see our article:
Are Citizens Forcefully Vaccinated in the Streets of Australia?