Arithmetic of Propaganda: A 187-ton Russian Airplane is able to Store 400 Tons of Water 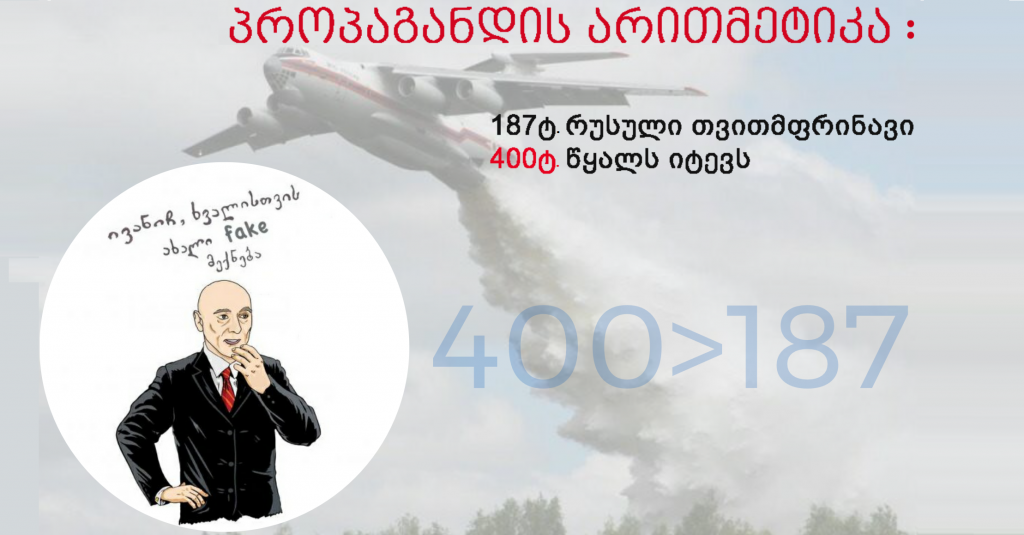 Turkey, Armenia, Azerbaijan and Belarus provided help with human resources to Georgia to fight the forest fire in Borjomi valley on August 20. The Government of Georgia refused the help of Russian Federation, the occupant country that destroyed the given forest area in the course of the war actions in 2008.

The Leader of “Georgian Troupe” (Kartuli Dasi), Jondi Baghaturia, published a photo showing a Russian special airplane on his Facebook page on August 23. The description of the photo mentioned that the Russian airplane discharges 400 tons of water on each try, however, Georgia refuses to receive help from Russia and asks Turkey for a 15-ton helicopter, which “the historical brother and the strategic partner” does not want to give.

Photo: The Photo Published by Jondi Baghaturia on Facebook on August 23

A 400-ton firefighter airplane does not exist. The photo published by Jondi Baghaturia shows Ilyushin Il-76 TD with the maximum retardant capacity of 42 tons and the maximum takeoff weight of 187 tons.

The main purpose of the airplane of the Ministry of the Russian Federation for Affairs for Civil Defence, Emergencies and Elimination of Consequences of Natural Disasters, Ilyushin Il-76 TD is to carry out firefighting works from air. Il-76 TD is equipped with water retardant tanks VAP-2. VAP-2 system is composed of two cylinder-like tanks, each of capable to store 21 tons of water, which amounts to 42 tons in total. Transferring 400 tons of water with Il-76 TD is impossible, as the empty Il-76 TD weighs 95 tons, the maximum takeoff weight is 187 – from that the fuel reserves are 90 tons and the maximal amount of the firefighting liquid itself is 42 tons. On July 1, 2016, Ilyushin Il-76 crashed during firefighting works in Irkutsk region. All of the ten members of the crew died in the crash.

The largest airplane used during firefighting works is an American Boeing 747-400 SuperTanker and it is capable of storing 74 tons of water or firefighting liquid under full usage.

On August 22, the biggest firefighting helicopter Mi-26 with ten rescuers on board departed from Belarus to the disaster zone to fight the forest fire. Turkey sent two helicopters Ka-32С as well as a firefighting airplane-amphibian CL-215, created specifically to fight the forest fires. CL-215 can land both on land and water and can discharge 5.4 tons of water per try. According to the Azerbaijani side, three State Border Service helicopters, more than 20 fire trucks and 131 firefighters are involved in the fight against the disaster. Armenia provides technical support to the Georgian rescuers. Two Georgian helicopters participate in the operation as well.