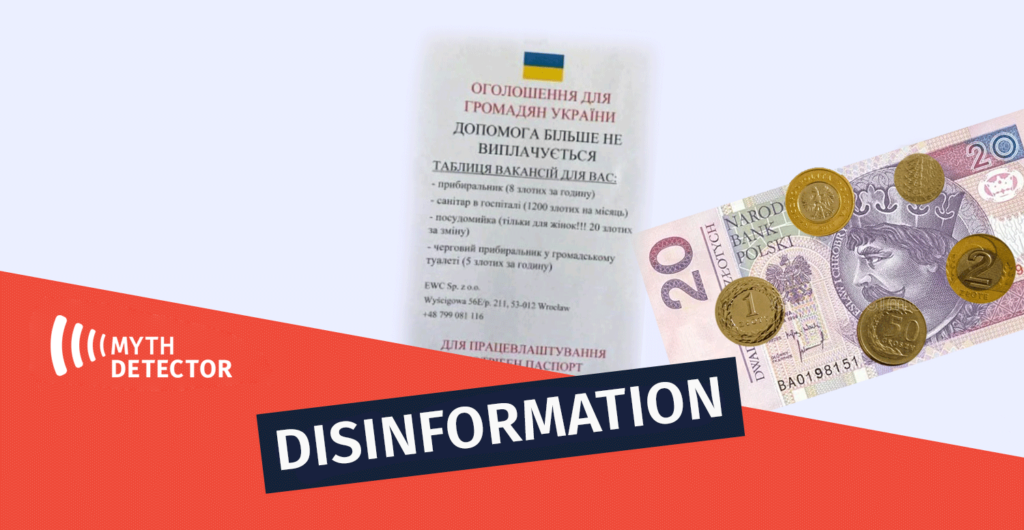 On August 9th, information that the Polish employment agency ‘EWC Sp. z 0. 0.’ offers employment to Ukrainian refugees for abnormally low wages was published in the Facebook group РУССКИЕ [Russians]. The post asserted that since the assistance to Ukrainian refugees has been cancelled, the following vacancies have been announced for them: Cleaner – 8 PLN per hour; Sanitation worker – 1200 PLN per month; Dishwasher (vacancy for women) – 20 PLN per shift; Cleaning public toilets – 5 PLN per hour.

At the end of the announcement, one can find the address and contact information of the employment agency EWC Sp. z 0. 0. 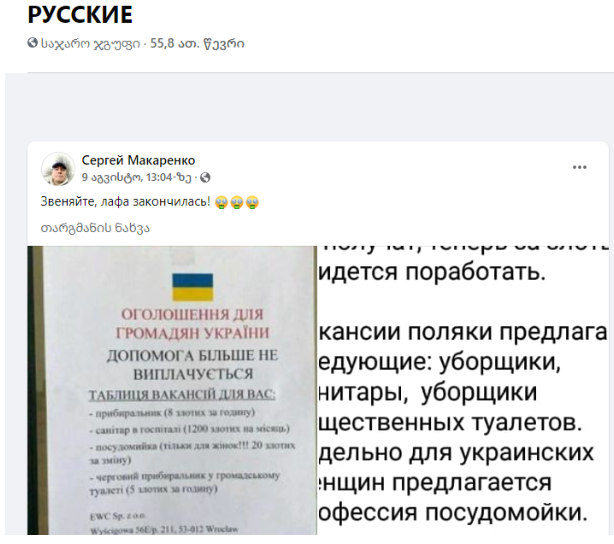 The disseminated information is false. The fact was denied by EWC on its official Facebook page. In addition, in Poland, the minimum wage is set by national law, and as of 2022, it estimates at 19.70 PLN per hour, including taxes, and 13.91 PLN without taxes.

The information about offering Ukrainian refugees jobs with salaries below the minimum was also disseminated in July. The company EWC Sp. z 0. 0 responded to the accusations using their Facebook page. The statement issued by the employment agency mentioned that it has never offered employment with similar rates, and the employment is carried out according to the regulations stipulated by the law. On August 9th, the company shared the mentioned statement into various employment groups. 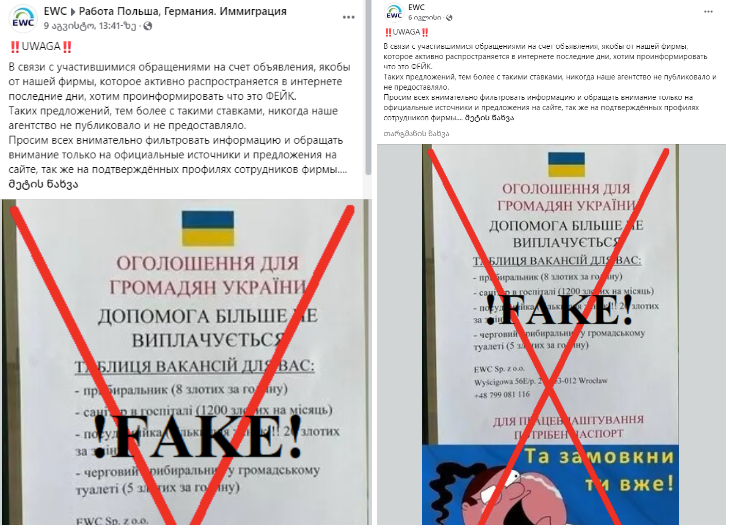 In addition to the hourly wage, the minimum wage for full-time employment (with an employment contract) has also been set, which by 2022 will amount to 3,010 PLN including taxes, and 2,209.56 PLN without taxes.

The statement by the official website of the Polish government related to the minimum wage stresses that the regulation applies to both private and public sector employment institutions.

It should be noted that Ukrainian refugees who moved to Poland as a result of the Russian-Ukrainian war enjoy the same employment rights as Polish citizens themselves. Therefore, even if the statement disseminated on Facebook was authentic, failure to pay the minimum wage established for order fulfilment or service contracts would violate the law.

On March 26, Polish President Andrzej Duda signed an amendment to the law “On assistance to citizens of Ukraine in connection with the armed conflict on the territory of this state.” The law defines the principles of legalization of the stay of Ukrainian citizens in Poland. According to the law, Ukrainian citizens who left Ukraine as a result of Russian aggression can legally stay in Poland for 18 months and can obtain an identification number (PESEL), granting them access to the Polish labour market. Ukrainians have the opportunity to start a business on the territory of Poland and engage in business activities under the same rules and conditions as Polish citizens. In addition, Ukrainians can receive social and financial assistance and access the state healthcare system under the same rules as Polish citizens.

How has Poland Helped Ukrainian Refugees?