On November 30th, 2022, Russian media, including Regnum, Ren.tv ,Vzglyad, Politcentr, and Georgian Facebook accounts disseminated the claim that the statistics of HIV infection in Poland became record high after the influx of Ukrainian refugees. Russian publications refer to Polish media – Wirtualna Polska as a source of information.

The authors of the Facebook posts published on this topic claim that Ukrainian refugees are spreading AIDS uncontrollably. 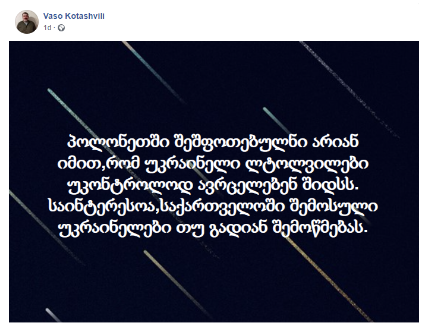 The information about the increase in HIV-infected people in Poland is being disseminated manipulatively. The statistics of HIV infection in Poland have indeed increased in 2022; however, according to “Wirtualna Polska,” which cites the professor of the University Clinic in Białystok, Joanna Zajkowska, during the pandemic, diagnosis of the infection was limited; therefore, the referral increased in 2022. In addition, Ukrainian refugees who continue to receive treatment in Poland were recorded in the current year’s statistics. Nowhere in the article is it mentioned that Ukrainian refugees are causing the record outbreak of the infection.

According to the official data of the Polish National Institute of Public Health, 1910 new cases have been confirmed in Poland until October 30th, 2022. It is worth noting that Ukrainian refugees who are receiving treatment in Poland have been recorded as new cases of infection in the statistics.

In the article of “Wirtualna Polska,” the professor of the Department of Infectious Diseases and Neuroinfections of the University Clinic, Joanna Zajkowska, notes that testing for HIV infection was limited during the pandemic. According to her, the diagnostic centres did not work full-time, and the referral rate was not high. Therefore, the infection detection rate was also low. In 2022, the testing service was fully restored, creating a more complete picture of HIV infection statistics. According to Zajkowska, people who may have been infected in the previous year will be added to the statistics in 2022. In addition, Ukrainian refugees in Poland, who were infected and continue to receive treatment in Poland, were recorded in the current year’s statistics, which led to an increase in the general number of infections. Ukrainian refugees who are registered in Poland have full access to medical services. Nowhere in the article is it mentioned that Ukrainian refugees are responsible for the record number of HIV cases.