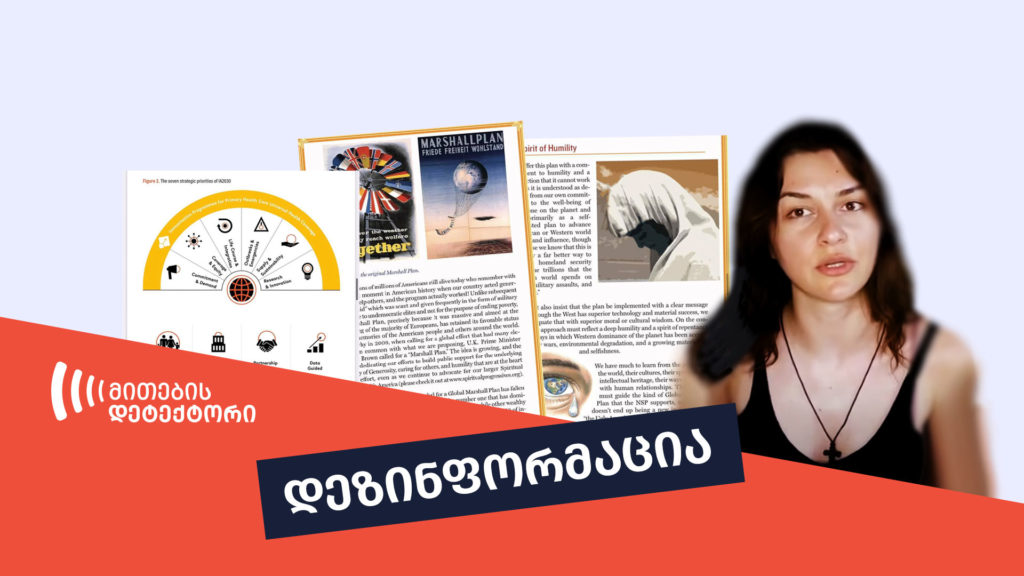 On August 18th, 2021, Georgian blogger Natia Colussi published a post on her Facebook account, where she linked the COVID-19 pandemic with the fourth industrial revolution and globalisation. Colussi claimed that the new world order is being established according to the “Global Marshall Plan,” which is identical to the “Agenda 2030” of the United Nations. The aforementioned projects, according to Colussi, aim to bolster the fourth industrial revolution, create an economic collapse and reduce the world population. Colussi further claimed that the plan of Agenda 2030 about global immunisation was already reflected in the 2016 document published by the WHO, while the “staged” COVID-19 pandemic is a part of the same agenda. She also stressed that the first stage of the “Global Marshall Plan” is to stabilise the world population, which, according to her, means reducing the existing population by artificial means. 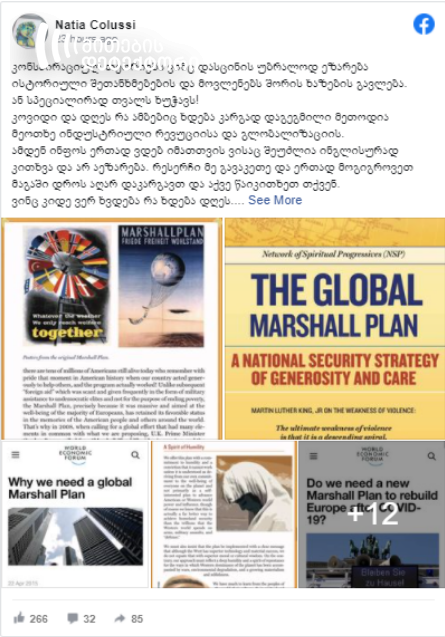 Out of three arguments included in the post of Colussi, one is a conspiracy theory, while the other two are disinformation. 1. The claim that stabilising the world population means the reduction of the living population by artificial methods is false. In reality, population stabilisation is a stage when the size of the population remains unchanged. 2. The claim that COVID-19 and the global vaccination were already included in the WHO 2016 document is also false, as the mentioned document concerns the “Influenza virus” and not SARS-COV-2. 3. The claim that the global pandemic is a part of the UN 2030 Agenda is a conspiracy theory.

1. The claim that stabilising the world population means the reduction of the living population by artificial methods is false.

The process of population stabilisation occurs when the number of people within a selected country (or even globally) does not increase or decrease drastically and remains within a stable range. In most cases, the stage can be achieved through family planning methods and improving the social and economic prosperity of the given society. The process by no means includes practices related to using tools such as global pandemics to reduce the already living population. 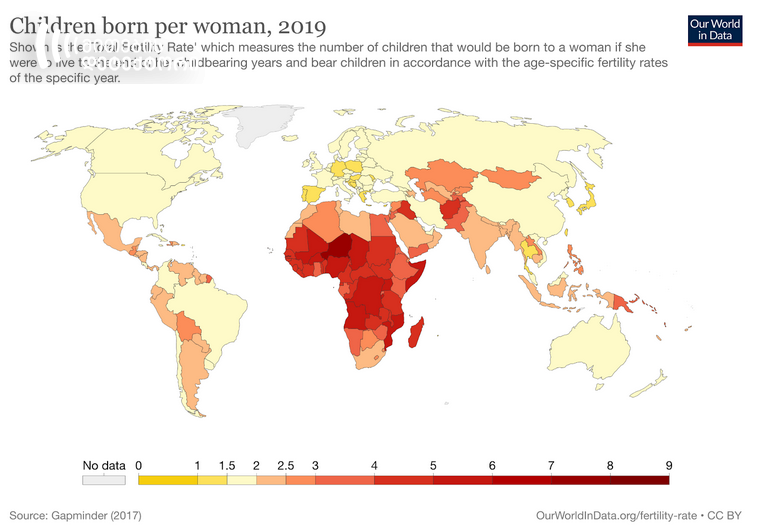 2. The claim that the 2016 WHO document concerns the coronavirus pandemic and global vaccination is false.

According to Colussi, the old records of the World Health Organization include references regarding the world pandemics and global vaccination plans, which, according to her, imply that the COVID-19 pandemic was planned and caused artificially. To prove the following, Colussi has published the “Global Influenza Strategy of 2019-30” of the WHO, where the organisation tackles the potential “influenza” pandemic. The claim of Colussi is false since she deliberately links the global influenza strategy with coronavirus. Despite both Influenza (also known as the flu virus) and SARS-COV-2 belonging to the group of respiratory viruses, they are by no means the same. The influenza virus was detected a while ago; nonetheless, every year, it causes the death of around 500 000 people worldwide. The strategy of the WHO corresponds to this number and aims to decrease the mortality rate by introducing a robust, holistic approach. 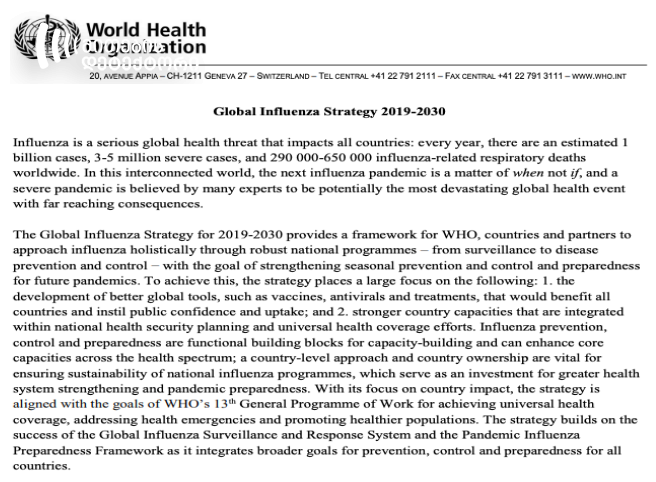 3. The claim that the coronavirus pandemic is a part of the UN Agenda 30, identical to the “Global Marshal Plan” and aims to introduce universal vaccination, is a conspiracy theory.

Agenda 2030 is a strategic document issued by the United Nations in 2016. The document is signed by 169 participants and aims to foster sustainable development worldwide by following 17 central focus points. The program, in general, aims to reduce poverty, ensure the protection of human rights and gender equality, and solve major economic and environmental problems of today. 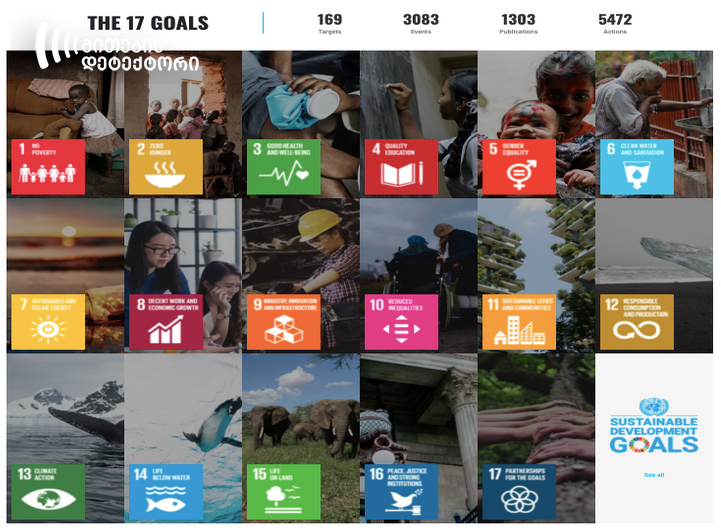 Goal 3 of the document concerns the good health and well-being of the world population. Nonetheless, the goal does not say anything about COVID-19; it even never mentions a global pandemic. The chapter underscores the importance of fighting challenges such as infant and neonatal mortality, a post-pregnancy complication in mothers in developing countries, access to healthcare, etc. Not to mention the need to fight diseases such as HIV, AIDS, Tuberculosis, etc.

The selected document is often linked with conspiracy theories. On October 1st, 2020, Georgian Facebook accounts disseminated the information that “Agenda 30” is a confidential document containing the plan of establishing a new world order. For more, see the article of “Myth Detector:”

As for the “Global Marshall Plan,” it is indeed partially similar to the “Agenda 2030.” The document was first published in 1990 and represented a strategy to achieve a sustainable world economy. The plan points out five key steps that could potentially ensure the creation of economic prosperity worldwide. The first step of the project underscores the necessity to follow UN Agenda 2030; nonetheless, the plan includes additional points such as achieving the 0.7% of GNP to firing assistance plan, fair taxation and creating an eco-social market economy etc.

Most importantly, the “Global Marshall Plan” is merely an initiative and has no practical implications. The articles included in the post of Colussi do not represent official documents. For instance, the book mentioned in the post of Colussi – “The Global Marshall Plan: A National Security Strategy of Generosity and Care,” is only a handbook published by the Network of Spiritual Progressives, which seeks to advertise the plan and earn donations by it. 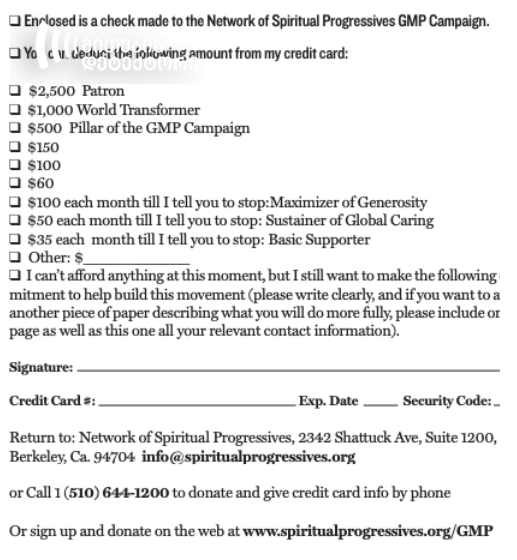 he same can be said about the World Economic Forum (WEF) articles discussing the need for implementing a “Global Marshall Plan” in the fight with the COVID-19 pandemic. WEF allows individual contributors to express their opinion on the website; however, the reader gets a special message at the end of similar articles that the views expressed in this article are those of the author alone and not the World Economic Forum. 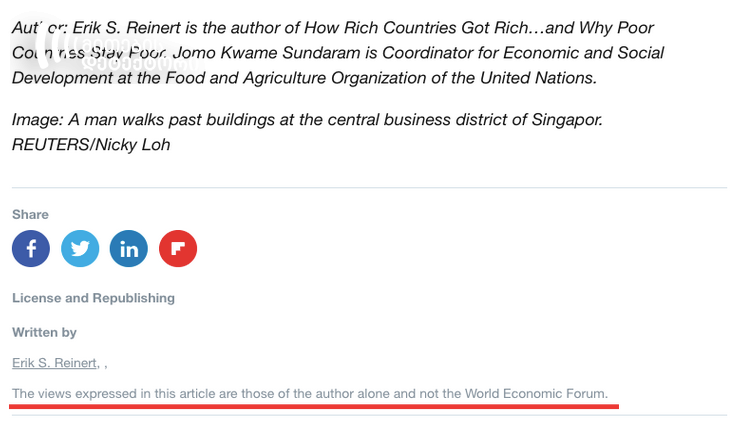 As for the fourth industrial revolution, one can freely stress that it has started way before the outbreak of the COVID-19 pandemic. The term implies the process of integrating digital technologies and the internet with entrepreneurship, mass-production and service industries. The process would consequently ease the burden on human labour and elevate the overall quality of life. Therefore, the claim that the COVID-19 was created to catalyse the 4th industrial revolution is groundless and contains elements of a conspiracy theory.

Natia Colussi has spread conspiracies in the past as well. For more, see: