Are the Emigrants Returning to Georgia to Welcome the Ex-President Saakashvili for the Upcoming Elections? 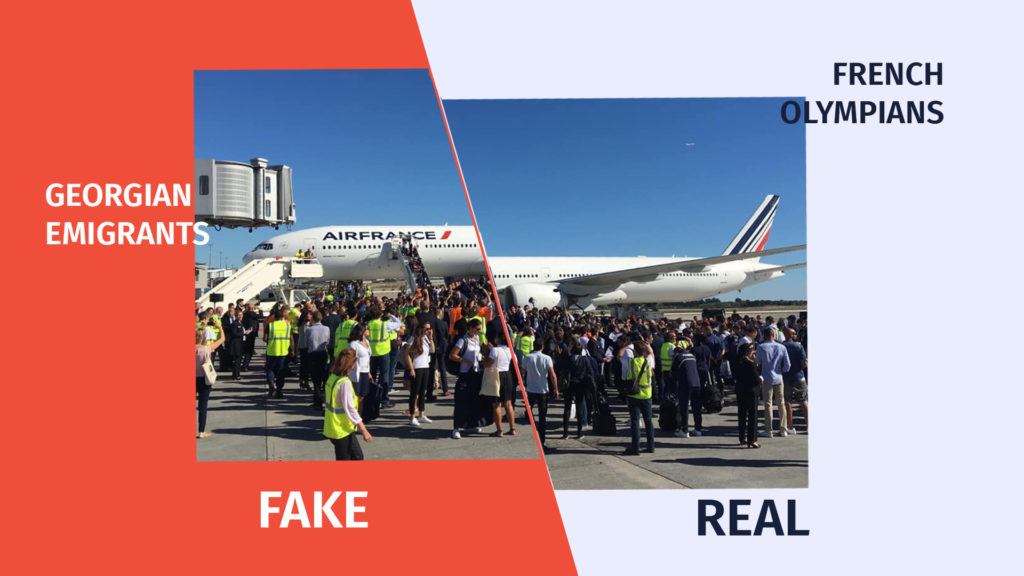 On September 29th, the Facebook user Mindia Avaliani posted a photo of dozens of people gathered around an airplane. According to the description, the photo depicts Georgian emigrants returning to their homeland from Paris Charles de Gaulle Airport to meet the ex-president Mikheil Saakashvili. Mindia Avaliani’s profile includes another airport picture with the caption “On October 2nd in Georgia.” 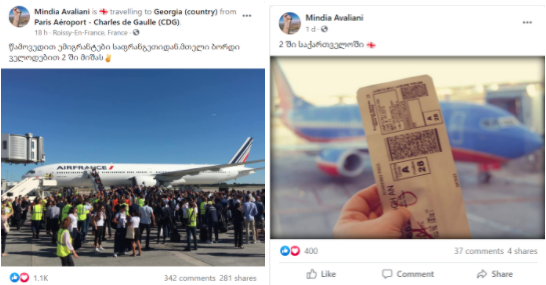 The photos published by Mindia Avaliani are being cirulated with a false description. The first photo was taken on August 23rd, 2016, at the Charles de Gaulle Airport in Paris and depicts the welcoming of the French Olympians from the Rio Olymopics. The second photo, on the other hand, has been present on the internet since 2014 with different descriptions.

The photo depicting the “Airfrance” plane was indeed taken at the Charles de Gaulle Airport in Paris, however, instead of the returning Georgian emigrants, it shows the return of French Olympians to their homeland. On August 23rd, 2016, the French delegation returning from the Rio Olympics was welcomed in a festive manner. As soon as the plane landed, the athletes were welcomed by journalists and airport staff, while family members and fans awaited them inside the airport building.

The photo was taken right after the plane landed, and other photos of the day confirm that the author of the photo was indeed attending the welcoming event on August 23rd, 2016, and was standing slightly afar from the crowd.

In the center of the disseminated photo one can observe a man with a blue flag, a T-shirt and a green ribbon around his neck. It is obvious that he is surrounded by journalists and supporters. This man is French judoka Teddy Riner, who was the flag bearer of the French delegation at the Rio 2016 Olympics, therefore, he was the one to get off the plane first with a flag holding in his hand. 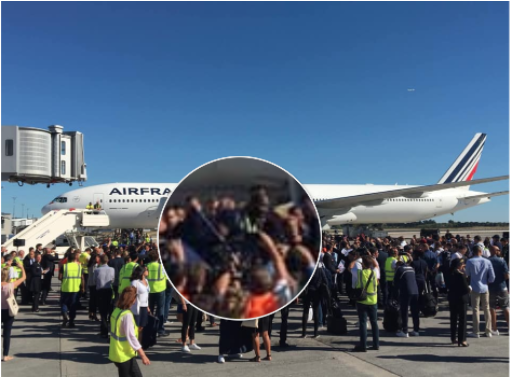 On August 23, 2016, various cameras spotted Teddy Riner holding a flag at the airport: 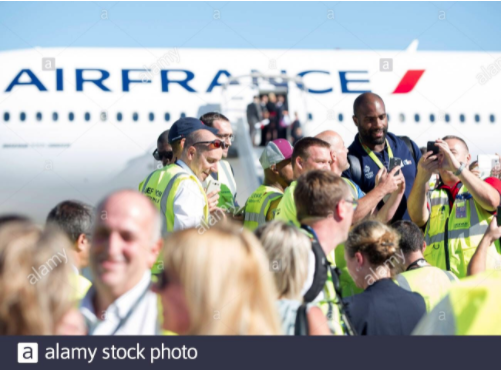 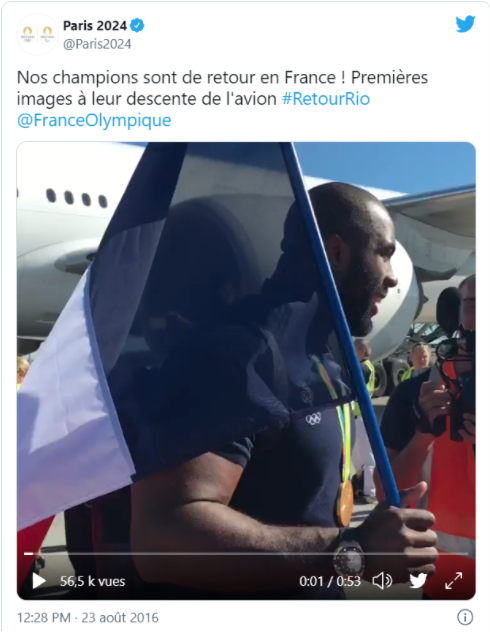 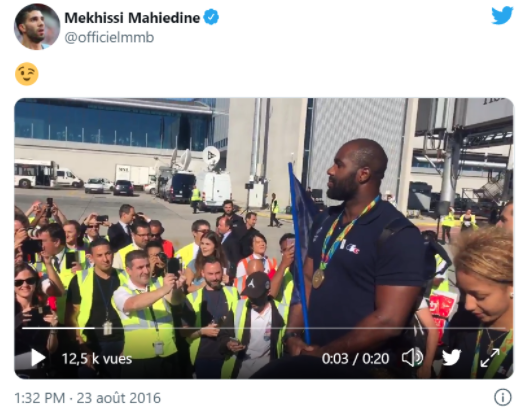 In the left corner of the photo one can find a woman with a bag hanging over her shoulder, who holds a phone to take a picture. In one of the photos taken by sports photographer Philippe Millereau at the welcoming ceremony of the Olympians at Charles de Gaulle Airport on August 23rd, 2016, the same woman can be identified, wearing the same clothes and standing in the same position. 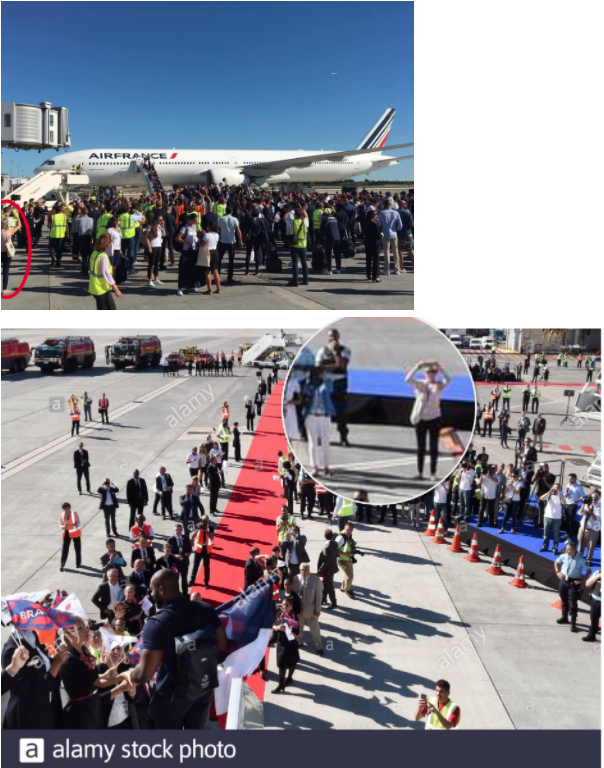 The photo spread in Georgia clearly shows two people watching the return of the Olympians from the spare ladder standing next to the plane. On August 23rd, 2016, these two people were also caught on camera by French sportsman Mahiedine Mekhissi. 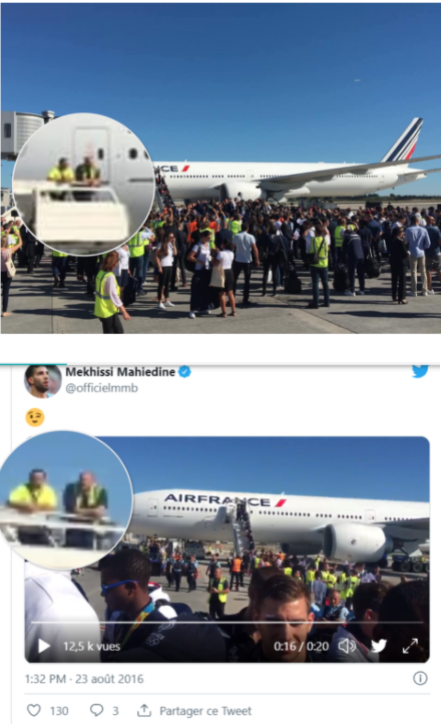 The photo published by Mindia Avaliani depicts another airplane in the air far from the lens. Alain Gadoffre spotted the same plane from a different angle. 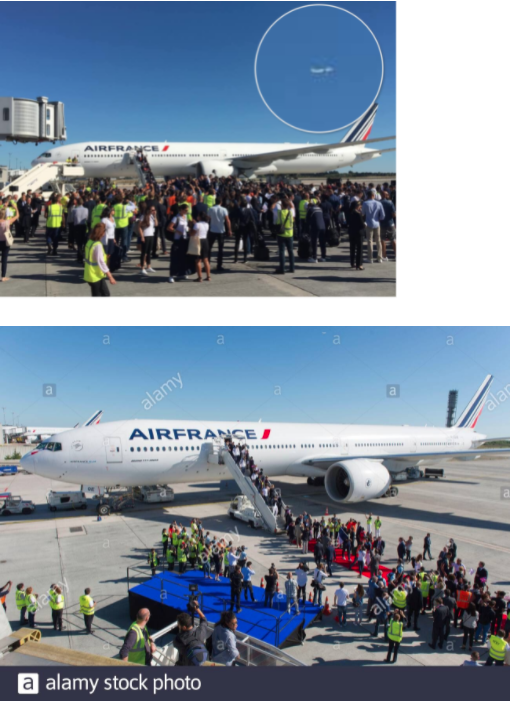 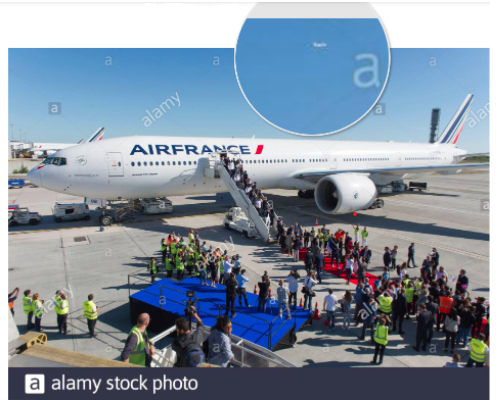 The fact that Mindia Avaliani has been posting a series of ticket and plane photos creates the impression that he will be traveling to Georgia, although like the plane photo, the ticket photo is much older and can be found on the internet since 2014, being featuredon the websites of various travel agencies and ticketing sites. 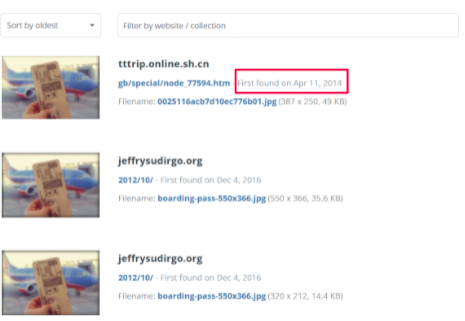 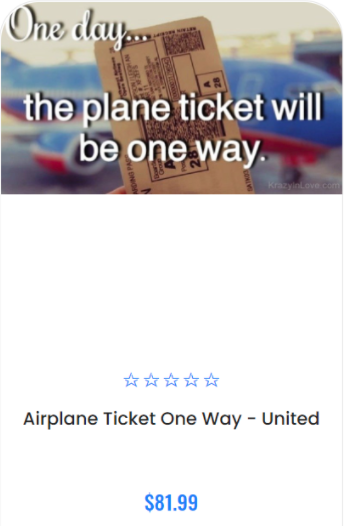 According to Mindia Avaliani’s profile, he lives in Bordeaux, France and is a member of the group “Georgian Emigrants in France.” The account does not showcase any image revealing their true identity. 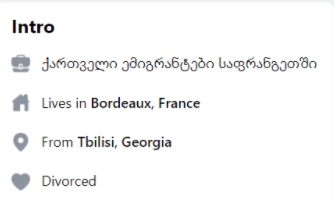 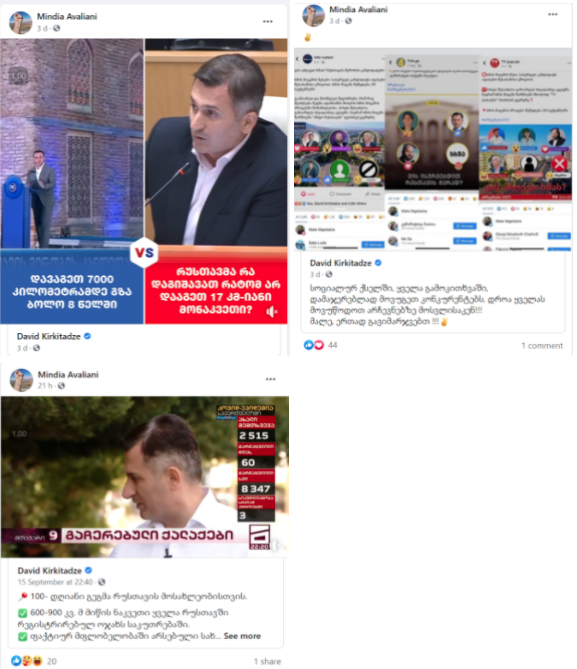