Are Texans Fined For Wearing Masks? 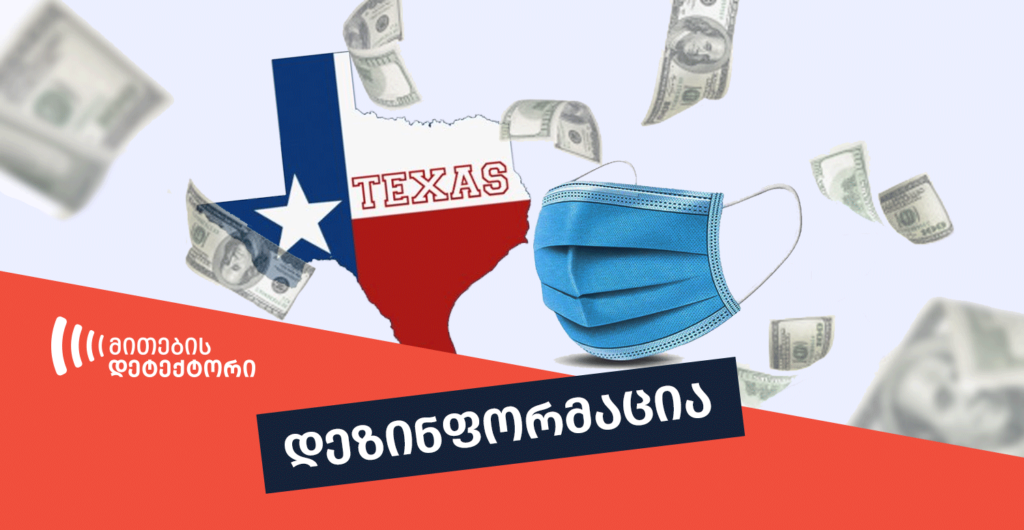 On May 25, Facebook user Shore Shanidze published a post stating that the fine for wearing masks in the state of Texas is 5000 U.S. dollars and that’s because the mask harms lungs and reduces brain activities. 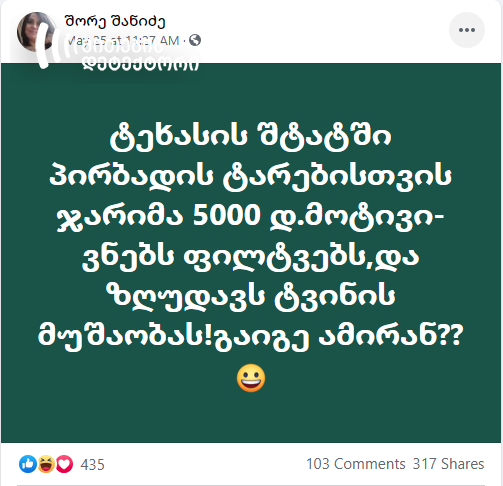 Shore Shanidze’s claim alleging that a fine for wearing a mask is imposed in Texas is disinformation. In fact, according to the Texas Governor’s Order, state government entities were prohibited to mandate citizens to wear masks, otherwise fine imposed amounts to 1000 U.S dollars, not 5000. According to Governor Greg Abbott, Texans should decide whether they want to wear a mask or not.

On May 18, Texas Governor Greg Abbott issued an Executive Order prohibiting state government entities – including cities, schools, public health authorities or government officials – from requiring mandatory mask-wearing of citizens. From May 21, local governments or officials that attempt to impose a restriction inconsistent with the aforesaid Executive Order can be fined up to 1000 U.S. dollars.

The statement provides a quote from Greg Abbott, where he notes that Texans should decide whether they want to wear a mask or not and the government shouldn’t mandate them. Greg Abbott also tweeted that Texans should make a decision on wearing masks according to their best health practices. 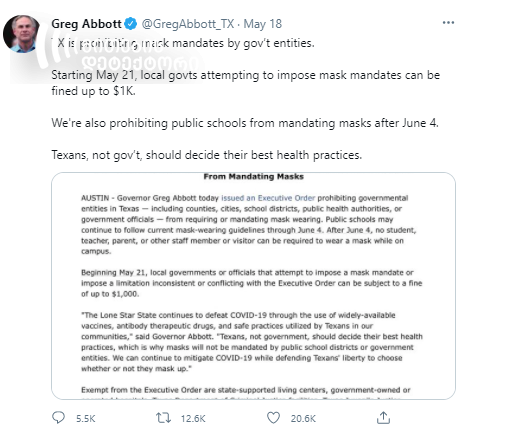 Wearing a mask in Texas was mandatory from July 2020 until March 10, 2021, and people violating the regulation were fined up to 250 U.S dollars. From March 10, restrictions in Texas loosened and the mask was no longer obligatory in public spaces, however, some businesses and public establishments were still required to wear a mask.

Shore Shanidze also writes that fines for wearing masks are imposed in Texas because it’s harmful to health, particularly to the lungs and brain; this claim is also a disinformation. In reality, a mask doesn’t cause Carbon dioxide intoxication, and mask-wearing isn’t harmful to health. It blocks the respiratory droplets and prevents human to human transmission of the virus.

See Myth Detector’s article on the topic:
Disinformation, as if face masks cause intoxication and that they can only be worn in the sterile environment’
Is It Possible to Measure the Level of Carbon Dioxide Behind Mask with a Gas Detector?
Do Wearing Face Masks Protect Us from COVID-19?