Are People with Blood Type A or Rh Positive More Vulnerable to Coronavirus? 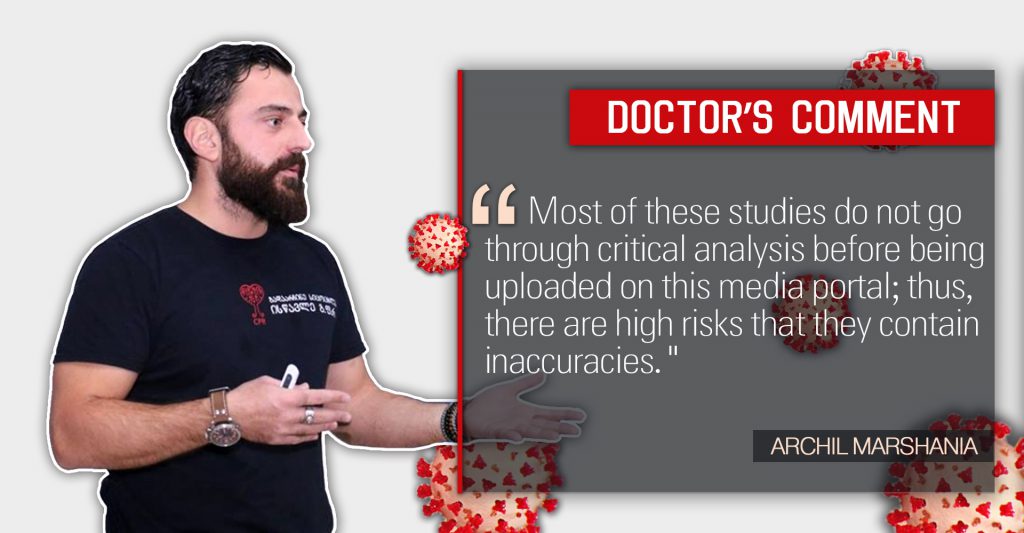 On March 17, several media outlets (metronome.ge, newposts.ge, gadacema.ge, alia.ge  and cyc.ge) spread information about the study conducted by Chinese researchers related to coronavirus and blood types. According to the media reports, scientists in China took blood group patterns of more than 2,000 patients infected with the virus in Wuhan and Shenzhen and found that blood type A patients are more vulnerable to coronavirus than those with other blood types. Some media outlets claim that according to the study, Rh positive people are more at risk, saying nothing about blood type A patients. Despite different interpretations, the news portals covered the study as confirmed information.

The media reports contain inaccuracies, because the primary source has mainly focused on blood type rather than Rh factor. As far the study is concerned, it was published on free medical platform; it is hypothetical and has yet to be assessed by other experts. Hence, it is not proved yet that people with blood type A are more vulnerable to coronavirus.

Is it confirmed that a certain blood type is more vulnerable to coronavirus?

The information about the study conducted by Chinese researchers was published on South China Morning Post on March 17, at 5pm, with a headline: “People with blood type A may be more vulnerable to coronavirus, China study finds.”

Stephen Chen, senior reporter for South China Morning Post, writes in the article that Chinese researchers conducted a preliminary study to find correlations between blood type and the likelihood of being hospitalized with COVID-19. Medical researchers in China took blood group patterns of more than 2,000 patients infected with the virus in Wuhan and Shenzhen and compared them to local healthy populations. Of 206 patients who had died from Covid-19 in Wuhan, 85 had type A blood, which was 63 per cent more than the 52 with type O.

Noteworthy that Stephen Chen refers to MedRxiv, the preprint server for health sciences, as its source. According to the information posted on MedRxiv, it is a free online archive and distribution server for complete but unpublished manuscripts (preprints) in the medical, clinical and related health sciences. Preprints are preliminary reports of work that have not been peer-reviewed. They should not be relied on to guide clinical practice or health-related behavior and should not be reported in news media as confirmed information. 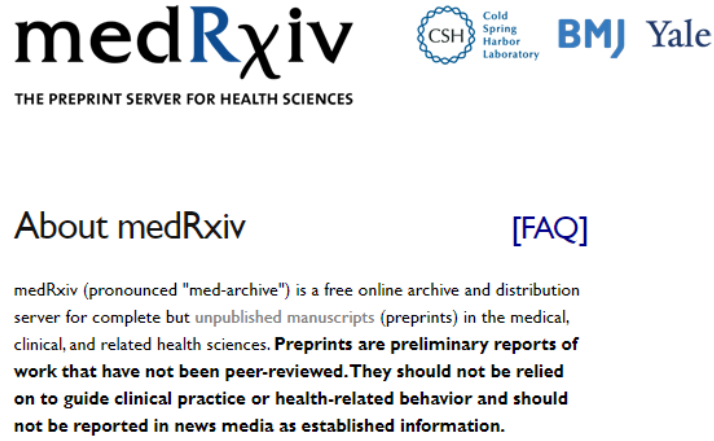 Part of Georgian media outlets covered the study as a new discovery of Chinese researchers; another part spread the information with different interpretations, providing incorrect coverage of the study. Some media outlets are writing not about blood type, but about the influence of COVID-19 on Rh positive and Rh negative, though the primary source says nothing about it.

In particular, on March 17, news agencies metronome.ge, newposts.ge, gadacema.ge, alia.ge  and cyc.ge spread the information with different interpretations. Their articles focus not on blood type A as mentioned in the primary source, but on Rh positive factor. 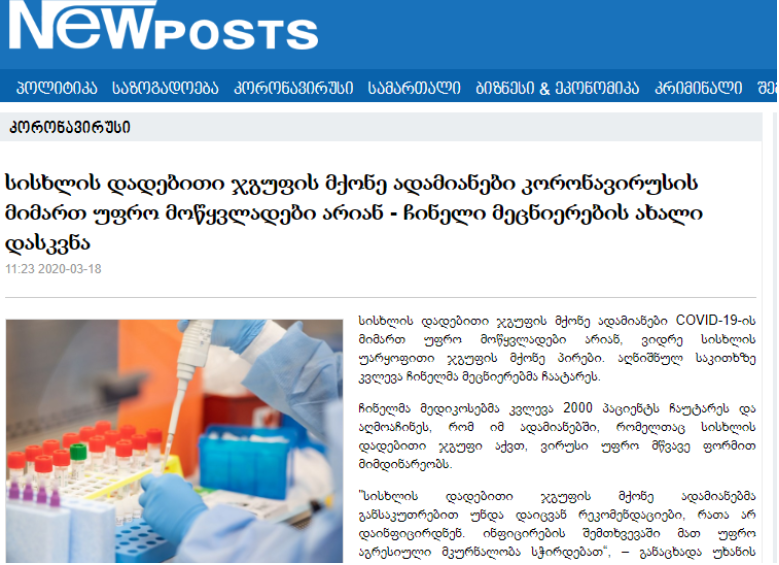 The Myth Detector reached out to doctor Archil Marshania for comment.

Archil Marshania clarifies that blood type and Rh factor are not the same. There are four main blood types and each of them is either Rh positive (Rh+) or Rh negative (Rh-). Rhesus factor refers to protein on the surface of red blood cells. Being Rh positive means that you have proteins on red blood cells and if not, a person is Rh negative. So, one and the same blood type may be Rh positive and Rh negative. Therefore, Rh factor cannot be determined by blood type.
Archil Marshania also notes that the study itself, which allegedly finds that people with blood type A are more at risk than people with blood type 0, cannot prove that people with blood type A are more vulnerable to coronavirus. Doctor Marshania claims that anyone can be infected and there are a lot of questions towards the study, for example: why has the study been taken seriously especially as it had not gone through critical analysis? If people with blood type A are more vulnerable, were other risk factors faced by these people taken into consideration, did they suffer from chronic diseases? Had it been a mere coincidence? Although 2,000 people had been examined, is it enough for making a conclusion, when over 180,000 people have already been infected? The study does not explain the phenomenon about what molecular influence blood type and virus may theoretically have to trigger this outcome and so on. Hence, Archil Marshania notes that the study does not enable making any conclusion about the links between being infected with coronavirus and blood types.

About the sources: clickbait websites

gadacema.ge and cyc.ge are among the websites that covered the above mentioned study. The both publish news articles, positioning themselves as media outlets, though actually they are clickbait websites. Such websites aim to attract the readers’ attention with sensational titles and visual effects and there is a high likelihood that by visiting the website, the reader helps the owner of the website earn money – the higher the number of visitors and clicks, the more the owner earns. Besides information, the websites post yellow content, 18+ type and other doubtful ads. 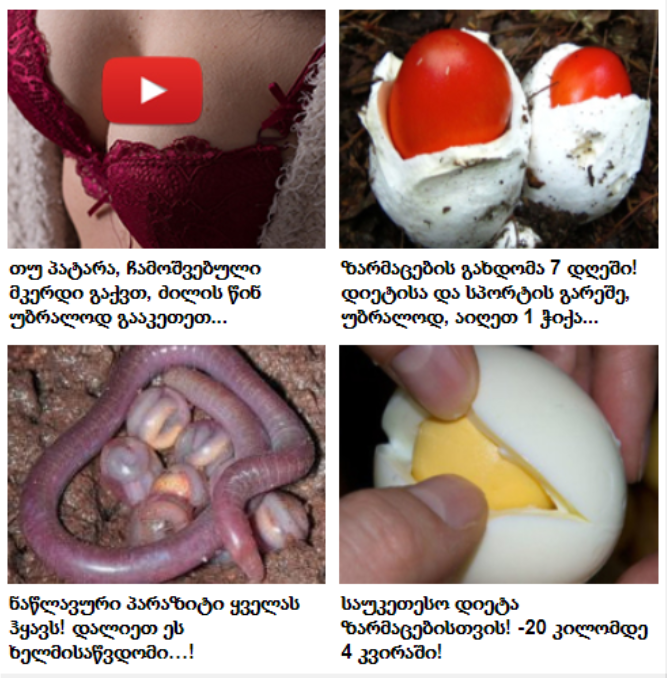 According to registrator.ge, gadacema.ge was registered on March 2, 2020. It is owned by a person named sabir qiarimovi. This is the third time the media outlet published a doubtful article about coronavirus. On March 11, the website spread disinformation according to which the Georgian citizens who travelled back from Italy on special flight, used violence against a bus driver on their way to Sachkhere hospital, where they should have been quarantined for two weeks. On March 15, gadacema.ge published information, as if Dutch scientists have found a medicine against coronavirus. The headline of this article is misleading, because the scientists, in fact, have discovered an antibody, rather than a medicine against coronavirus.