Are gold belongings of pharaohs made out of Sakdrisi’s gold? 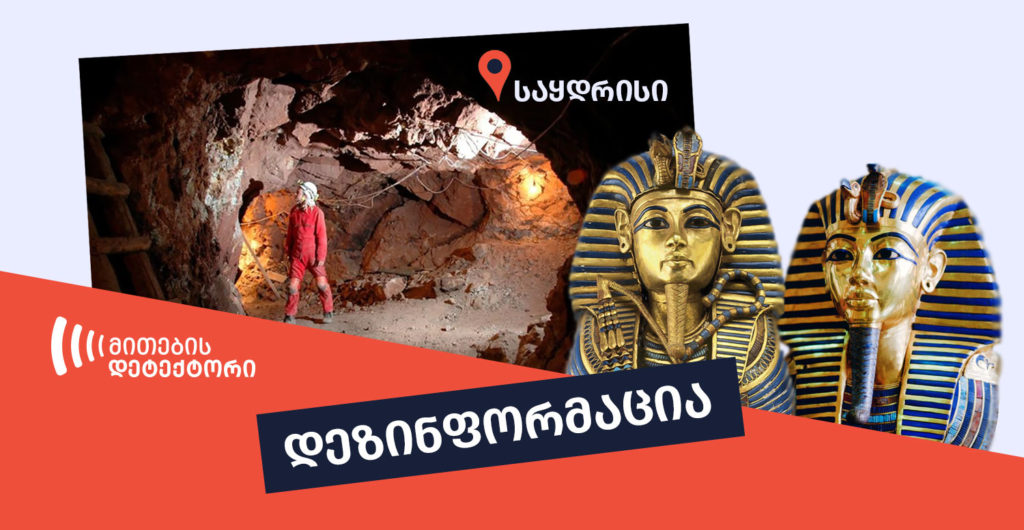 On April 17 Facebook account Samkaro Samkaro shared a post, where it is stated, that in studies of English, French and German scientists, samples of Sakdrisi’s gold was compared to samples of gold works kept in museums of the world, and turns out, gold belongings of Pharaohs kept in Egyptian pyramids, were made out of gold mined from Sakdrisi,Georgia. As a source for evidence, they posted a popular scientific documentary “In Search of the Country of the Golden Fleece” in the comments. Samkaro Samkaro’s post is based on an identical post shared by Tsira Nikolaishvili. In the comments of the post, the author does not respond with any specific answers to questions of Facebook users. 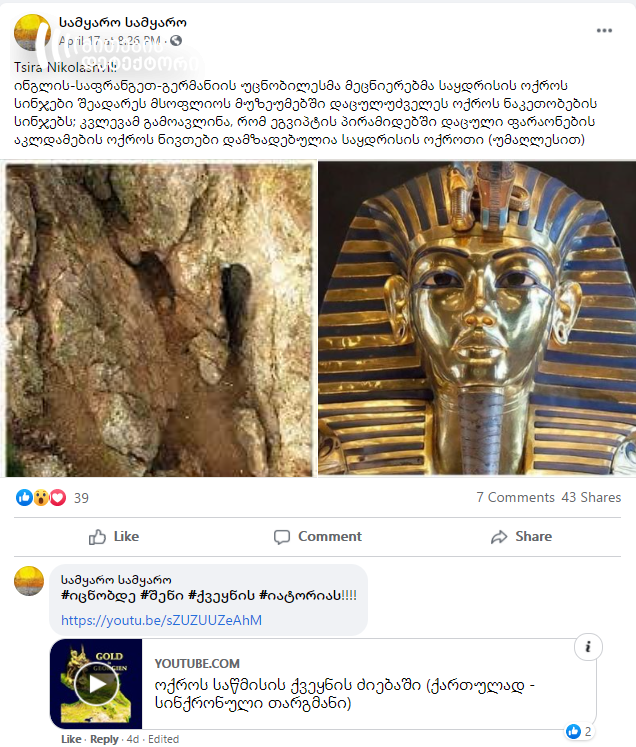 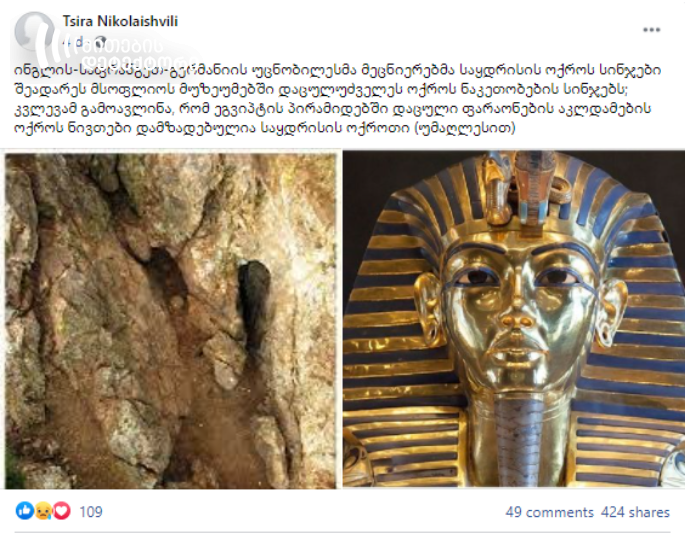 Information that items kept in Egyptian burial grounds are made out of Sakdrisi’s gold is not true. The study mentioned in the post cannot be found in open sources. As for the documentary mentioned as a source, it does not talk about similarities between Egyptian gold items and gold excavated from Sakdrisi, Georgia, but about the fact, that the gold mining method used in Sakdrisi existed 1000 years before the mining method of Egypt and is the oldest one, according to current data. Concerning the testing of Egyptian gold samples, Georgian and German scientists participating in the documentary, have not conducted such research.

“Myth Detector” contacted professor Irina Ghambashidze, head of the archeological expedition of Sakdrisi, who denied the disseminated information. The documentary claimed as the source was shot by German and French TV studios ZDF and ARTE and is about their projects “Implementing new methods of interdisciplinary research in mining archeology and archaeometallurgy” and “Gold in Georgia”. The film talks about the methods of gold mining and not about how old the gold items are. The documentary also does not mention the possible origins of the Egyptian gold items, therefore it cannot be used as proof of the spread information.

The documentary mentions, that the excavations of Sakdrisi gold mine, according to radiocarbon dating are from the second half of IV millennium B.C to the first half of III millennium B.C (5400-4700 years ago) and according to current data, is the oldest because this excavating method in Egypt starts 1000 years later and falls behind by 10 centuries from the date of Sakdrisi’s gold excavations.

Professor Irina Ghambashidze confirms, that during the project Georgian and German scientists conducted interdisciplinary research only in Georgia (Early kurgans of Trialeti and Bedeni), Azerbaijan (Kurgans of Soyuq/Bulaq and Hansansu), and gold items dated IV-III B.C., excavated from the queen of Ur, Paubi’s tomb. “Geochemical and isotopic analyzes confirmed, that Sakdrisi’s gold ore was used to make jewelry of Hasansu’s Kurgan in Azerbaijan, while gold items from queen Puabi’s tomb are made from Egyptian gold.”During the project, scientists did not deal with Egyptian gold items, therefore no research was conducted concerning them.

Existing research about Sakdrisi
The scientific study of the Sakdrisi-Kachagiani site started in 2004 through the joint project of Science Academy of Georgia, Archeological center of Georgian National Museum, German Mining Museum in Bochum, and Ruhr University and was headed by professor Irina Ghambashidze and Professor Tomas Stollner. The Georgian-German expedition obtained unique discoveries in Sakdrisi. As a result of radiocarbon dating and ceramic research, the archeological site was dated IV-III millennium B.C. According to archeologists, mining of gold was conducted a millennia before Egyptians, which means excavating ore from the mine, refining and melding gold. At the same time, all necessary ancient weapons needed to obtain gold were discovered, which were used for mining in prehistoric times. Sakdrisi, as an underground site, has all the components that link it to similar sites of Asia, Europe and central Asia from IV-III B.C. (Stollner et al., 2008; Hauptmann, Klein, 2009; Ghambashidze, etc., 2010; Stollner et al., 2014).

How did they mine gold in Egypt? The assumption, that European scientists compared items kept in museums of the world and Sakdrisi with each other, does not have any proof and no similar information can be confirmed in open sources. Gold in antic Egypt was obtained from mountainous regions between the Nile and Red sea, from Alluvial deposits as well as Quartz rocks. According to contemporary research, important traces of exploiting Alluvial sands and gravels discovered in the East, in the desert of Egypt and North Sudan confirm, that most gold used in Egypt was obtained through these easily refinable deposits.