Are Global Leaders Planning to Introduce an Annual Carbon Limit? 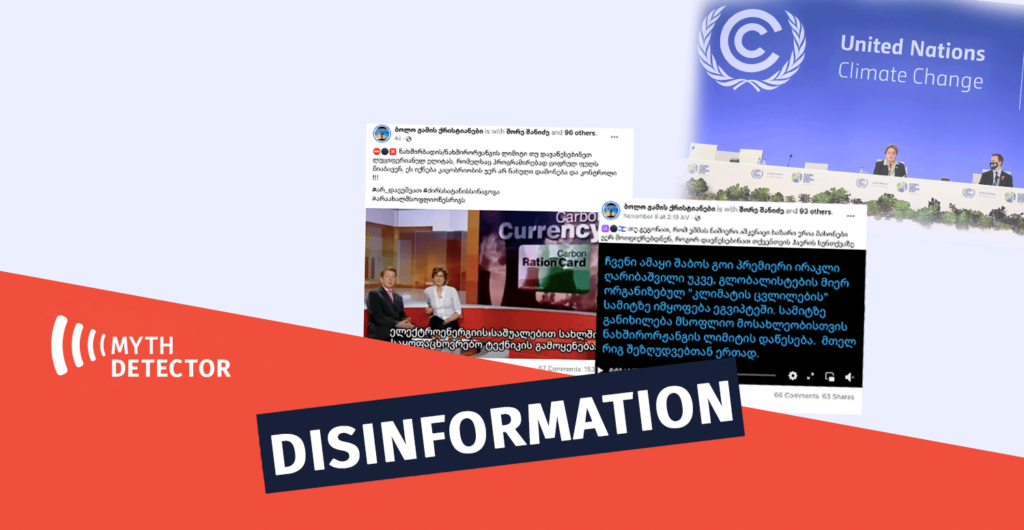 In early November 2022, multiple claims about the creation of annual carbon limits at COP 27 were spread on Georgian social media (1, 2, 3). According to the authors of these posts, the goal of these limits is to control the population. The authors claim that once the carbon limit is reached, energy consumption will become more expensive, leading to a situation where the majority exists to generate more carbon units for the wealthy in a system of modern slavery.

The claim that there will be a personal annual carbon limit instituted globally is false and misleading. The carbon credit schemes being discussed at COP 27 in Egypt mainly pertain to large corporations as a way to fund new clean energy projects. Furthermore, any carbon market schemes, global or otherwise, would be voluntary.

From 6-18 November 2022, the Egyptian city of Sharm El-Sheikh is hosting COP 27, a climate change conference organized annually by the United Nations as a space for global leaders to agree on policies to limit and adapt to the impacts associated with climate change. One of the main goals of COP 27 is to continue to refine the rules and regulations of Article 6 of the Paris Agreement regarding a global carbon market, where credits for reducing or avoiding greenhouse gas emissions would be bought and sold. In other words, countries would be able to transfer carbon credits earned from the reduction of greenhouse gas emissions to assist other countries in meeting their own climate targets. Potentially, private companies would also be able to participate in the market. It is important to note that there is no reference to an annual carbon limit in any of these discussions, nor is the focus on individual citizens.

More specifically, on 7 November 2022 a round table on “Innovative Finance for Climate and Development” was held. According to the round table’s agenda, voluntary carbon markets, on which stakeholders sell their carbon credits on a voluntary basis, were discussed as a way to finance clean energy products. This roundtable is likely where the false claim about an annual carbon limit through personal carbon trading schemes originated, with the author of the first post later clarifying in the comments that Personal Carbon Trading (PCT) schemes were created to test annual carbon limits. This misconception of PCT schemes was also found in the third post’s video compilation.

PCT schemes are based on the idea that each citizen is allocated a carbon quota that can be entirely used or partly sold to others. For example, in Lahti, Finland, the CitiCAP project envisions developing a new mobile app to calculate a person’s mobility carbon footprint. By using the app, citizens can receive benefits, such as bus tickets, for making sustainable mobility choices. Notably, the practice in Sweden is purely voluntary and aims to encourage citizens to reduce their carbon footprint. A similar idea was debated on Good Morning Britain back in 2006, a clip of which was stitched into the third post’s video compilation. According to this proposal, which was originally introduced by the then Secretary of State for Environment, Food, and Rural Affairs David Miliband, everyone in Great Britain would be given an annual allowance of carbon tied to a carbon ration card that they could use on a variety of products. This proposal went nowhere, however, and no such system currently exists in Great Britain. Once again, there is no evidence of a global individual carbon limit that would force citizens to participate in a global carbon market.

The third post’s video compilation also includes a video about Do Black, the world’s first credit card with a carbon limit. This video was spread around Georgian Facebook earlier this month, with the related claim that exceeding one’s monthly carbon limit would lead to a person’s credit card being frozen. As a Myth Detector fact-check showed, while the Do Black credit card does exist, its aim is to help users calculate their carbon dioxide emissions and its use is completely voluntary.

Irakli Garibashvili, the Prime Minister of Georgia, has also attended the conference held in Egypt. In his address, PM noted that climate change “has become a challenge for our generation.” When it comes to carbon emissions, Garibashvili mentioned Georgia’s Long-Term Low Emission Development Strategy, which aims to ensure carbon neutrality of Georgia by 2050.  As for the round table, Georgian PM never took part in the PCT discussions, but he joined the round table “Investing in the Future of Energy” and spoke about the importance of developing sustainable energy sources.