Are Atheists in the U.S Banned From Participating in Elections? 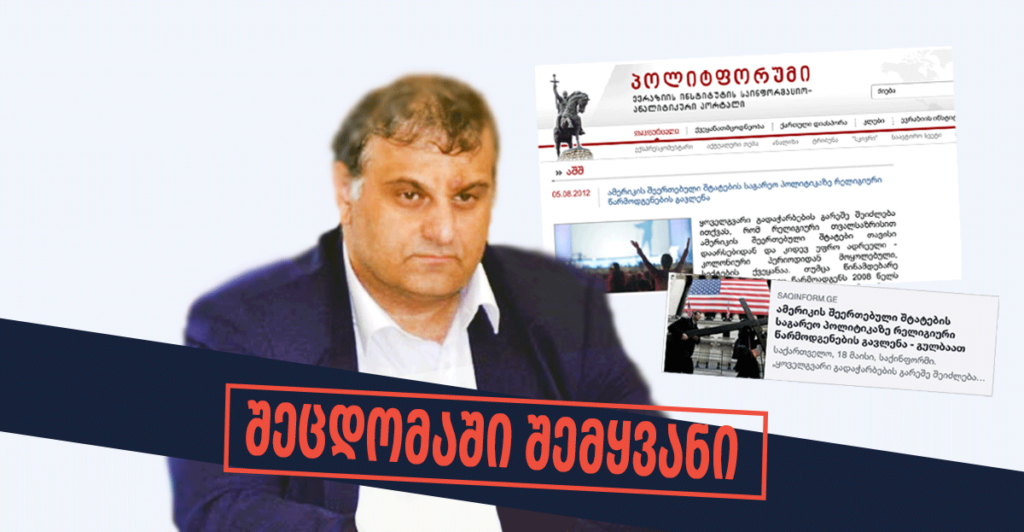 On May 18, digital edition “Sakinform” published the head of the Eurasian Institute Gulbaat Rtskhiladze’s article titled “The Effect of Religious Sentiments on the Foreign Policy of the U.S”. The article discusses the activities of various religious organizations in the U.S. and the basis of their beliefs. The author also considers the actions of religious organizations to be the determinants of U.S international policy. According to the author, atheists are discriminated against in the U.S, and says that the fact that atheists cannot participate in local elections per the constitution in 7 states is evidence of it. Moreover, homosexual intercourse is a crime under several U.S. state laws. The Eurasian Institute webpage politforumi.com and a journal “Sami Saunje” published the aforesaid article in 2012. 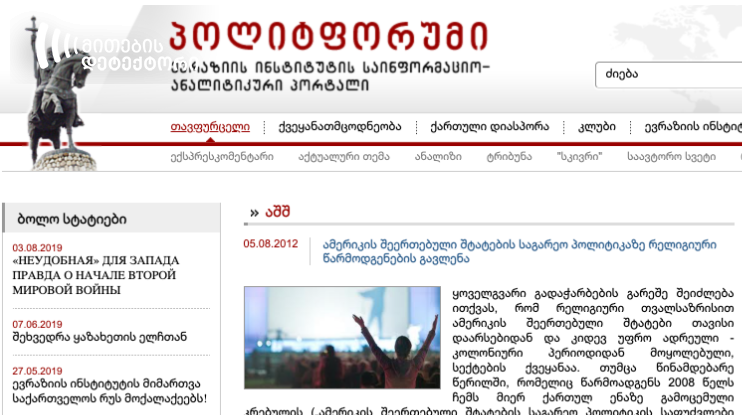 Gulbaat Rtskhiladze’s claim about atheists being banned from participating in local elections in 7 U.S. states is misleading. The constitutions of Arkansas, Mississippi, North Carolina, South Carolina, Tennessee, and Texas do require public servants to believe in god, however, in 1961, the U.S Supreme Court ruled the extension of Article VI of the U.S constitution to the U.S states besides the federal government. Thus, public servants aren’t required to pass a “religious test”. Moreover, according to the case law in the U.S, the 2003 Supreme Court ruling is binding, and laws on the punishment of homosexual intercourse are considered unconstitutional.

According to the constitutions of 7 U.S states (Maryland, Arkansas, Mississippi, North Carolina, South Carolina, Tennessee, and Texas), a person who doesn’t believe in the existence of the god, cannot be employed in the public sector. As for the laws in the state of Maryland, faith in God is required also for jurors and witnesses. However, these requirements are actually unenforceable. Article VI of the U.S constitution bans the “religious test” requirement for federal officeholders. In 1961, per the U.S Supreme Court ruling, this Article was extended to the U.S states and thus, no state should require public servants to pass the so-called “religious test”. The Supreme Court made the ruling after Maryland citizen Roy Torcaso refused to declare belief in God in order to become a notary public. It is precisely after the ruling on the Torcaso case that atheists are employed in the public sector despite the constitution in 7 states.

It should be noted that the Supreme Court ruling is based on Article VI of the U.S constitution, according to which public servants shall not require any religious tests as a qualification to any office or public trust. Therefore, 7 U.S states’ request on religious belief is unconstitutional and according to legal practitioners, it cannot be enforced, thus making it a “dead record”.

There have been several cases when this particular law in 7 U.S states was taken to the court. For example, in 1992 math professor Herb Silverman was denied a position as a public notary because of being an atheist. He appealed the decision to the court and won in 1997 per the South Caroline Supreme Court ruling. In 2009, Cecil Bothwell won a seat on the Asheville City Council but opponents tried to evoke the ban on atheists to force him out of his seat. However, efforts were in vain and they soon backed down because of the unconstitutionality of the legal record.

Even though the aforesaid legal record cannot influence the employment of public servants, different atheist unions attempt to completely remove it from the states’ constitutions from time to time, however, the president of the organization “Americans United for Separation of Church and State” told Vice in 2014 that there’s no political will to completely remove the aforesaid unconstitutional restrictions since politicians get nothing in return. Later in 2016, Barack Obama signed the amendment of the Frank Wolf International Religious Freedom Act of 1998, which specifically concerns non-believers and focuses on their protection against discrimination.

“Sodomy laws” in the U.S. have existed since the 19th century. Back then, punishing homosexuals weren’t the driving force behind the sodomy law, but instead the intend was named to be the maintenance of morals and protection of vulnerable groups in society from sexual assaults since the aforesaid laws included rape and sexual acts with minors. Sodomy laws were mostly used against homosexuals from the 20th century. Given the content of the laws, private sexual acts between same-sex individuals became punishable.

In 1955 the American Law Institute voted to decriminalize consensual sexual acts between individuals of legal age, however, decriminalization of homosexuality on a legal level in states started in the 1960s. In 1961, Illinois became the first state to revoke sodomy laws and decriminalize homosexuality

2003 was a turning point for the decriminalization of homosexual intercourse. The U.S Supreme Court acquitted John Lawrence and Tyron Garner in the court case “Lawrence vs. Texas” confirming that sanctions and punishments against homosexuality are unconstitutional. Following the aforesaid ruling of the Supreme Court, sodomy laws became a formality in the constitutions of states, which means that they cannot be used to punish individuals.

Same-sex marriage became legal in all U.S. states in 2015.