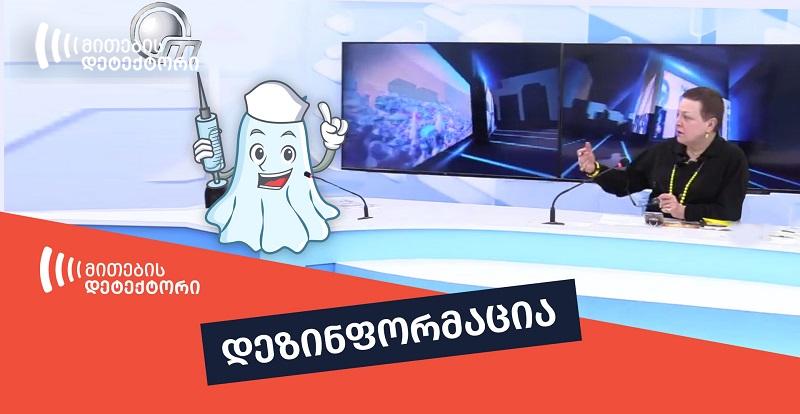 During the Obieqtivi TV program Gamis Studia (Night Studio) aired on January 25, 2020, Nino Ratishvili, the program host, and Nona Agdgomelashvili, an invited guest, spoke about vaccines. The latter claimed that vaccines cause various complications, including epilepsy, autism and infertility. To back up her words, Agdgomelashvili provided an example of vaccines manufactured by the pharmaceutical company Merck. She noted that several years ago, the company Merck lost court cases due to its HPV and MMR vaccines, which caused autism among patients as well as increased cancer rates, according to the study conducted in the UK. Agdgomelashvili stressed that the COVID-19 vaccine poses the same risks, because a number of people have died in Norway and the United States after receiving Pfizer’s coronavirus vaccine. She also noted that Pfizer has frozen the sperm of 25-60-year-old male participants of clinical trials, supposing that the vaccine will have adverse effects on male reproduction.

Nona Agdgomelashvili also said during the same TV program that 2,000 Italian doctors filed lawsuits against the World Health Organization (WHO) in the European Court of Human Rights (ECHR) because treatment of patients under the guidelines received from the WHO had been causing mass deaths until doctors decided to change these guidelines on their own. In addition, she claimed that existence of the coronavirus pandemic is under doubt, because death rate was lower in all European countries in 2020 compared to previous years. 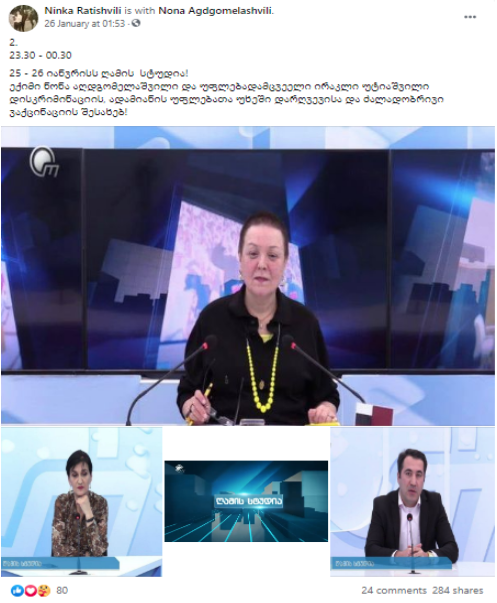 A lawsuit was really filed in the court of New York in 2000 claiming that the Measles, Mumps, and Rubella (MMR) vaccine manufactured by the American pharmaceutical company Merck caused autism (Doe vs. Merck). The plaintiff alleged in the lawsuit that the Merck vaccine caused autistic disorder of a baby boy in 1999. The court issued its ruling in 2019, following almost 20-year-long deliberations, and dismissed the vaccine autism lawsuit against Merck as baseless from both medical and scientific points of view. According to the information posted on the website of the Centers for Disease Control and Prevention (CDC), MMR vaccine-induced measles immunity appears to be long-term and probably lifelong in most persons.

As for the Merck-produced human papillomavirus (HPV) vaccine, the studies conducted at different times do not confirm that cancer rates have increased among vaccinated patients. Agdgomelashvili claims that the studies were conducted in England during 12 years. In fact, various studies conducted in England and Scotland at different times confirmed that not only the HPV vaccine does not increase cancer risks, but it significantly reduces the risks for cervical cancer development. According to the findings of various studies, evidence of clinically relevant herd protection against HPV related cervical cancers is apparent in both vaccinated and unvaccinated women.

Human papillomavirus (HPV) is one of the most dangerous and contagious pathogens causing cervical cancer. The HPV vaccine was developed during the 1990s and early 2000s. It finally received approval from the U.S. Food and Drug Administration in 2006. According to the information posted on the website of the Centers for Disease Control and Prevention (CDC), over 12 years of monitoring and research have shown that HPV vaccination is very safe and no side effects have been revealed. The same conclusion was made by the study conducted by the University of Adelaide in 2017 based on the analysis of theoretical and empirical data on HPV vaccines accumulated during nine years.

The myth about vaccines allegedly causing autism has been widely circulating for years. According to the spread disinformation, autism is developed as a result of receiving vaccines at an early age. However, this claim is not confirmed by any scientific research conducted so far. For example, 13 different studies were conducted from 1998 to 2006 about the correlation between MMR vaccine and autism. However, there is no evidence to support a causal association. Neither do the scientific studies confirm the hypothesis that not a specific vaccine, but a combination of various vaccines causes autism.

See details about disinformation spread regarding autism and vaccines in Myth Detector’s articles:

The claims as if vaccines cause epilepsy also lack scientific substantiation. Although in some cases, vaccination may cause fevers and febrile seizures, as a rule, febrile seizures do not cause any permanent harm and do not have any lasting effects. Various vaccines pose different risks of febrile seizers. The available studies do not confirm that immunization will pose a risk of repeated seizures or development of epilepsy in the future.  Some cases of apparent vaccine-induced febrile seizures could in fact be caused by inherent genetic epilepsy with no causal relationship with vaccination.

In 2020, the average weekly death rate in European countries significantly exceeded the figures of previous years. According to Eurostat, the weekly death rate for the first two months of 2020 was lower than average figures of 2016-2019. However, after March 9-15, 2020, it started sharp increase and reached its peak within several weeks. For example, from March 30 to April 5, 2020, number of deaths was by 50,000 more on average per week compared to 2016-2019. Preliminary data from 31 European countries show that there were around 321 000 additional deaths during weeks 1 to 44 (January to October) than the average number of deaths during the same period between 2016 and 2019. 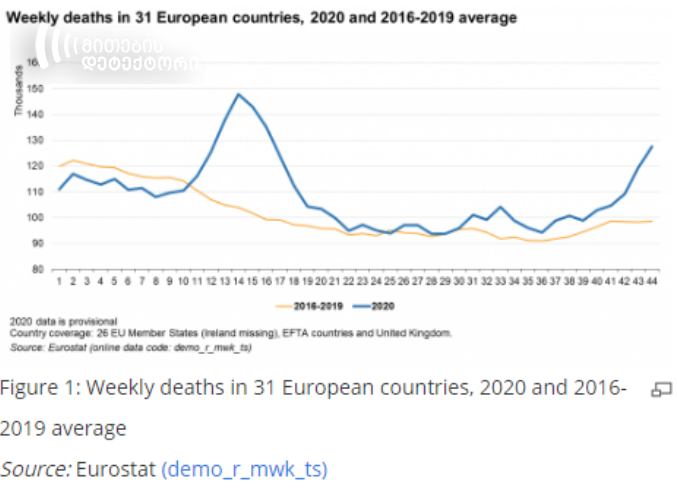 Disinformation about patients allegedly dying after getting Pfizer’s vaccine in Norway and the United States is not new. Information about deaths following vaccination in Norway is manipulative, because according the Norwegian Medicines Agency, there is no evidence that 33 deaths were caused by vaccines. Information about deaths following vaccination in the United States is provided by Vaccine Adverse Event Reporting System (VAERS); however, anyone can submit a report to VAERS and while VAERS serves as an early warning system for potential problems with vaccines, determining whether there is a causal link between deaths and vaccines requires further investigation into these reports.

Likewise, according to official explanations about 10 deaths in Germany, there is no evidence that links the deaths with COVID-19 vaccines.

The document published by Pfizer, which thoroughly describes the procedures of COVID-19 vaccine clinical trials, dedicates a chapter to recommendations related to reproduction of male volunteers involved in clinical trials. The document, however, neither offers any recommendation nor says anything about the need of sperm storage due to the risks of infertility.

It is noteworthy that University of Miami Miller School of Medicine researchers launched a study on December 17, 2020 looking at the impact of the COVID-19 vaccine on male fertility.  Participants aged 18-50 scheduled to receive Pfizer’s COVID-19 vaccine will be evaluated on its effect on semen parameters for up to 6 months post vaccination. The study is expected to end in spring 2021. Based on the mechanism by which mRNA acts, the researchers do not expect the COVID-19 vaccines will have an impact on male fertility. But obviously, they need data to confirm that hypothesis.

It is unknown what sources Agdgomelashvili refers to when claiming that Italian doctors allegedly filed a lawsuit against WHO in the Strasbourg-based court. It is worth noting that even if such lawsuit was filed in ECHR, the court would not consider it, because it considers the lawsuits lodged by separate individuals and non-governmental organizations against one or more of the States Parties to the European Convention on Human Rights. Accordingly, no proceedings can start in ECHR against the World Health Organization.

It is noteworthy that a committee named “Noi Denunceremo” (we will go to court) was established in Lombardy, one of Italy’s worst-affected regions, in May 2020. The committee, representing families of the COVID-19 victims, filed a lawsuit in a Rome court, accusing Italian government of crisis mismanagement and demanding €100 million in compensation. The World Health Organization is not featuring in this lawsuit either.