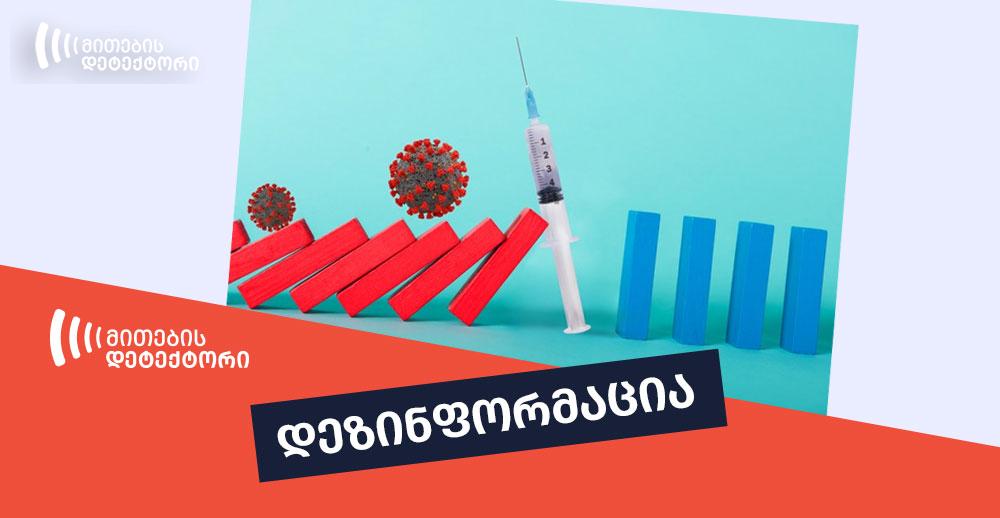 On March 14, 2021, Facebook user Keti Sesiashvili spread the video recording of Zakaria Rochikashvili’s program “Eskulapi” (Asclepius), where Georgian doctors Tina Topuria and Tinatin Gotsadze are talking about the coronavirus vaccines. As of March 21, the video has 16K views. 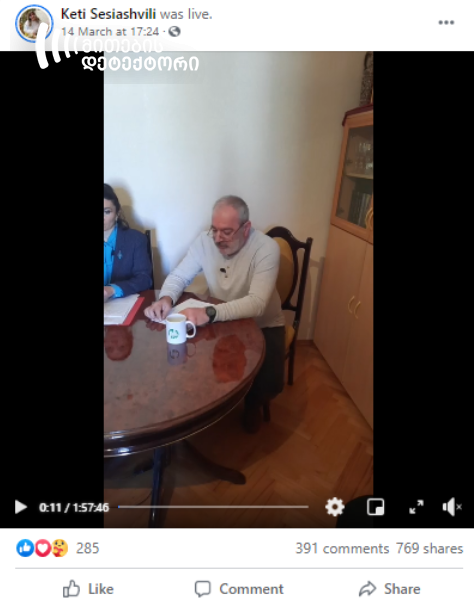 The video contains several pieces of disinformation, as well as a partly false claim and a conspiracy theory about the coronavirus and COVID-19 vaccines.

Disinformation No.1: The technology used in the mRNA coronavirus vaccines was tested only on animals before the pandemic. The RNA-based vaccines have not been tested on humans so far.

Scientists had been trying to develop messenger RNA (mRNA) vaccines since the 1990s and the RNA-based coronavirus vaccines are just based on multi-year research experience of this technology. Although there had been no precedent of using mRNA vaccines among the broader population prior to the development of Pfizer and Moderna vaccines, the claim as if the vaccines developed through this technology were tested only on animals is false.

In fact, Moderna and Pfizer’s German partner, BioNTech have been trying for over a decade to create the RNA-based vaccine against cancer and other infectious diseases; it is noteworthy that they conduct trials on both animals and humans. Back in 2018, the mRNA vaccines demonstrated encouraging results in both animal models and humans. According to the data for 2018 released by Nature Reviews Drug Discovery, a monthly scientific journal, eight various mRNA vaccines underwent clinical trials against infectious diseases and 25 various mRNA vaccines underwent different stages of clinical trials against cancer.

Disinformation No.2: Japan suspended use of Moderna vaccine after two cases of anaphylactic shock were reported.

The Moderna vaccine has not yet been authorized by Japan’s regulatory authorities and only Pfizer’s vaccine has been administered in the country so far. Takeda Pharmaceutical, a Japan-based representative of Moderna, asked the Japanese government on March 6 to fast-track its application for Moderna’s coronavirus vaccine, with plans to begin distribution by June. A decision on the application will likely be made once results from a Japanese trial with around 200 participants, due out in May, are submitted.

As for the cases of anaphylactic shock (severe allergic reaction), as of March 12, only seven of the 17 instances of anaphylaxis following coronavirus vaccinations reported by Japanese medical institutions qualify as true cases under international standards. The Japanese health ministry’s expert committee actively examines connections between inoculation and adverse reactions. The expert panel, however, concluded that “there is no major concern regarding safety at this time.” Moreover, the country continues the process of vaccination that has never been halted. 437,485 vaccine doses have already been administered in Japan.

Zakaria Rochikashvili claims during the program that there had been no real ground to declare the pandemic, referring to the number of deaths in Italy. In fact, the figures provided by Rochikashvili do not reflect the true death toll. According to the statistical data provided by UNdata and Statista, a total of 235,060 individuals died in Italy from December 1, 2018 to April 1, 2019, while number of deaths from December 1, 2019 to April 1, 2020 was 258,038 – by 22,978 more, not merely 16.

In addition, Rochikashvili cites irrelevant period for assessing the number of deaths during the coronavirus pandemic, because the first COVID-19 case was reported in Italy not in December 2019, but in the second half of February 2020; neither was the pandemic over in Italy on April 1, 2020. After relatively light summer, the second wave of the coronavirus pandemic erupted in Italy, like other European countries, in November 2020. According to Statista, following March and April, Italy recorded the highest number of deaths for 2020 in November and December. 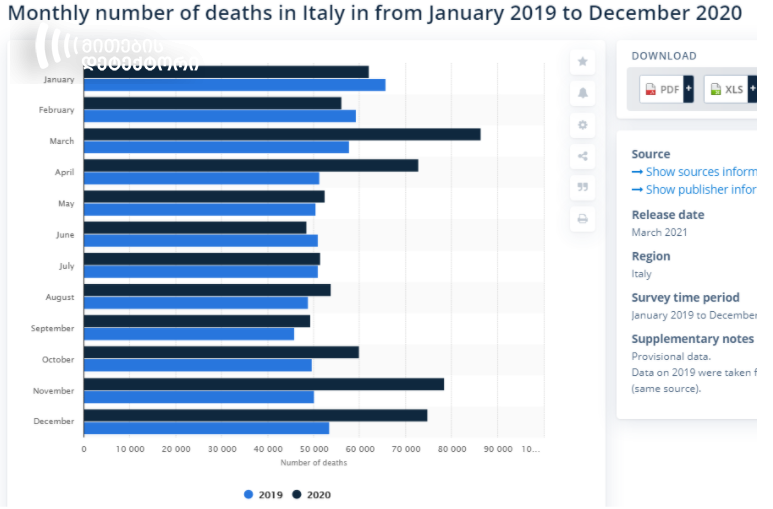 Monthly number of deaths in Italy from January 2019 to December 2020. Source: Statista

Partly false: AstraZeneca vaccine is ineffective and causes serious side effects. To improve its quality, a trial was conducted in Britain to test combining AstraZeneca and Pfizer vaccines, but it proved unsuccessful.

Britain really launched a trial on February 4, 2021 to assess the immune responses generated if doses of the COVID-19 vaccines from Pfizer and AstraZeneca are combined in a two-shot schedule. 800 volunteers participated in the trial to examine the immune responses of an initial dose of Pfizer vaccine followed by a booster of AstraZeneca’s, as well as vice versa, with intervals of 4 and 12 weeks. However, the claim as if the trial aimed at improving the quality of less effective AstraZeneca vaccine and the attempt proved unsuccessful is not true. In fact, the British researchers behind the trial said data on vaccinating people with the two different types of coronavirus vaccines could help understanding of whether shots can be rolled out with greater flexibility around the world. It is expected more vaccines will be added to the trial when they are approved and rolled out. According to the British researchers, initial data on immune responses is expected to be generated around June 2021.

As for the safety and efficacy of the AstraZeneca vaccine, its clinical trials showed 62% efficacy, well below the bar set by the Pfizer and Moderna vaccines. However, according to the vaccination data from various countries, the vaccine showed protection at 76% during the three months after the first dose that rose to 82% after people were given the second dose. European Medicines Agency (EMA) and the World Health Organization (WHO) said there is no evidence that the vaccine causes serious and grave side effects.

Conspiracy theory: The AstraZeneca vaccines arrived in Georgia two weeks earlier and European countries suspended vaccination for two weeks to track the vaccination process in Georgia during next two weeks.

Five European counties announced their decision to suspend use of AstraZeneca vaccine on March 11 and later on March 15, Italy, Germany, France and Spain followed suit. The decision came after several patients were diagnosed with dangerous blood clotting conditions after receiving the jab. Georgia received the first batch of COVID-19 doses on March 13. However, the claim as if European countries decided to track the vaccine’s side effects in Georgia is a conspiracy theory and lacks evidence.

After several European countries suspended use of AstraZeneca vaccine, besides the regulatory authorities of separate countries, European Medicines Agency (EMA) also launched investigation of vaccine safety and concluded on March 18 that the vaccine is not associated with an increase in the overall risk of blood clots, it is safe and recommended for use. During the process of monitoring, EMA, like other relevant authorities, investigated not the vaccination process in Georgia or any specific country, but a number of events of blood clots in people who had received the vaccine throughout Europe. Shortly after Europe’s medicines regulator concluded that the AstraZeneca vaccine was “safe and effective,” some European countries (Germany, Italy, France, Spain, etc.) decided to restart their roll-out from March 18. France’s health regulator, however, recommended that only over 55s should get AstraZeneca shots, while three Nordic countries – Sweden, Norway, and Denmark maintained their suspension of AstraZeneca’s COVID-19 vaccine until March 25 to review the judgment released by the EMA. It is noteworthy that some European countries, among others the UK, Belgium, Poland and Czech Republic have not suspended use of AstraZeneca vaccine.

Other fake reports voiced in the video

In the two-hour-long video, the doctors reiterated several false claims about vaccines and the coronavirus that were previously verified by Myth Detector in its earlier articles:

See details in the article: https://archive.is/ddOW8