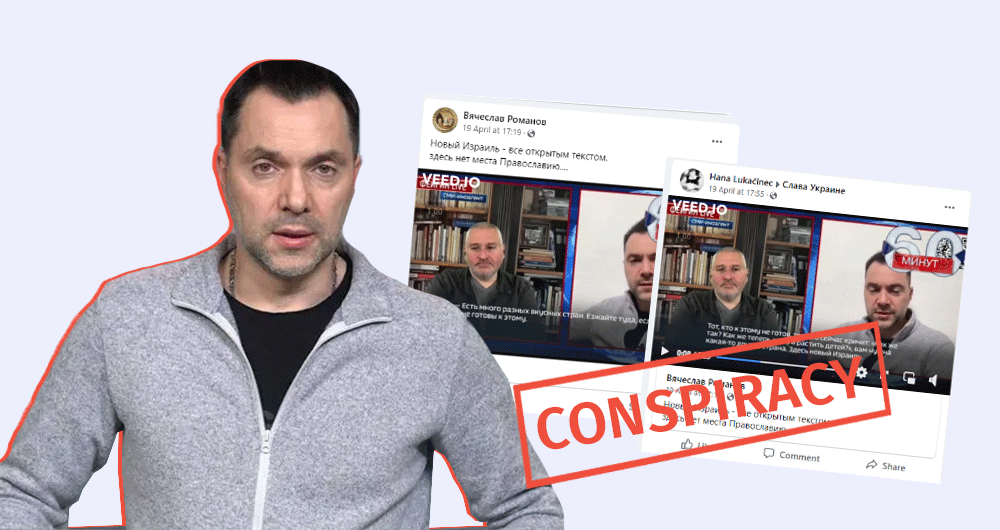 On May 4th, 2022, the Facebook account ‘Tornike Diasamidze’ posted a video depicting the opening ceremony of a Jewish centre in Ukraine. According to the video description, the Jews want to bring the Antichrist to the territory of Ukraine and transform it into the political center of world governance in the future. The post also states that the main goal of the Jews is to rid Ukraine of the Orthodox Christians. The same video was posted on the Facebook page of the “Modzraoba Dzlevai Sakvirveli” along with an excerpt from an interview with Oleksiy Arestovych, the adviser to the Office of the President of Ukraine. The video features an inscription, according to which the Jewish Masons have been preparing for the settlement of Jews on Ukrainian lands for a long time, and the Ukrainian authorities have already spoken openly about this. The inscription is followed by Arestovych’s phrase: “Those who are not ready for it, they are shouting today – how can this be, how to live and raise children like this. You need another state; this is the new Israel.”

On April 19-22nd, excerpts from Arestovych’s interview were also shared by the Russian-language Facebook accounts (1,2,3). 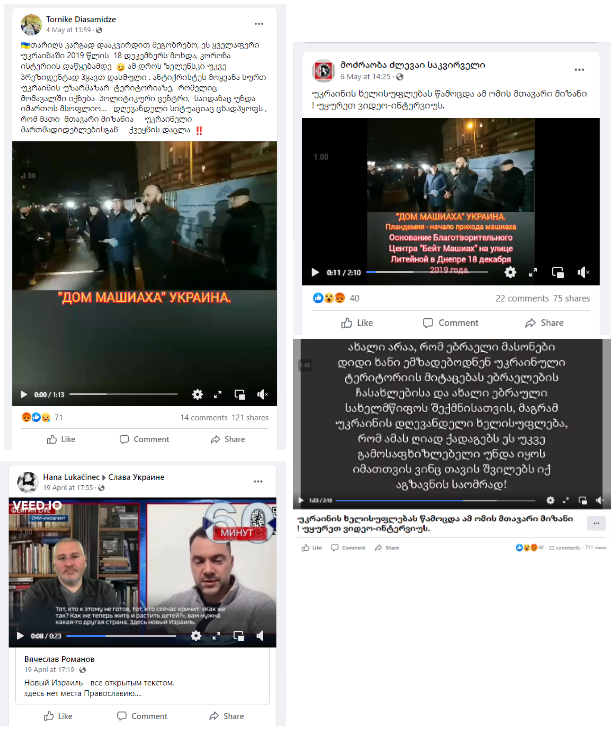 Claims that Jews are preparing to bring anti-Christ to Ukraine and that Ukraine should become a “new Israel” are part of a conspiracy theory. In addition, the quote of Oleksiy Arestovych is being disseminated without full context.

The quote from Oleksiy Arestovych used in the video published by the “Dzlevai Sakvirveli” is taken from an interview he gave to the YouTube channel ФЕЙГИН LIVE on April 11th. While speaking about the future of Ukraine, the adviser to the Ukrainian president’s office remembers the case of Israel, noting that just as Israel and the Arab states endured several wars before realizing that this path is ineffective, so will Ukraine, and by 2032-35 several small and large confrontations with Russia are still expected. Arestovych adds that only the most resilient people will survive this process, and those who are not ready for it will have to find another country, as Ukraine becomes the new Israel.

Oleksiy Arestovych: “I will tell you what will be dangerous; we have an evening of dangerous stories today… This war will not be the last war with the Russian Federation. Like Israel and the Arabs went through 5 major wars with each other before realizing that these methods do not work and have to invent something else. Some made peace, like Jordan and Egypt, and some of them continue to be “struggle”. It will be about the same for us. I think a few military skirmishes, you and I were talking about, are guaranteed before [20]32 or [20]35. It means a clash every 2, maybe every five years and a big clash every 7 to 8 years, and it can only be endured by the ones who are the hardest. The ones who are not ready for it, they are screaming today – so how can we live like this and raise our children? You’ll need another state, this is the new Israel, but the scale is bigger and more dangerous.”

Arestovych later clarified this comment, stating that the controversy between Russia and Ukraine is similar to the Israeli-Palestinian issue because it concerns the historical heritage, and there is no easy way to resolve it. Consequently, Arestovich used Israel only for comparison.

The published posts show the construction of the Beit Mashaiah Jewish Center in the Dnieper, Ukraine, on December 18, 2019, to illustrate the growing Jewish influence in Ukraine, with Jews planning to bring the “Antichrist” to Ukraine.

In fact, according to the plan, the Jewish Center complex will combine several functions. Its primary purpose is to provide housing for poor Jewish families. In addition, administrative and educational institutions, as well as a shrine, will be located in Beit Mashaiah. Jewish and Ukrainian clergy have also attended the opening ceremony.

This building is not the first Jewish center in the region. Opened in 2012, the Menora Center is one such complex, which aims to showcase the culture of the local Jewish community and strengthen Ukrainian society.

There are quite a number of Jewish communities in Ukraine, numbering from 56,000 to 140,000 in 2016, making it the fourth most populous Jewish community in Europe.