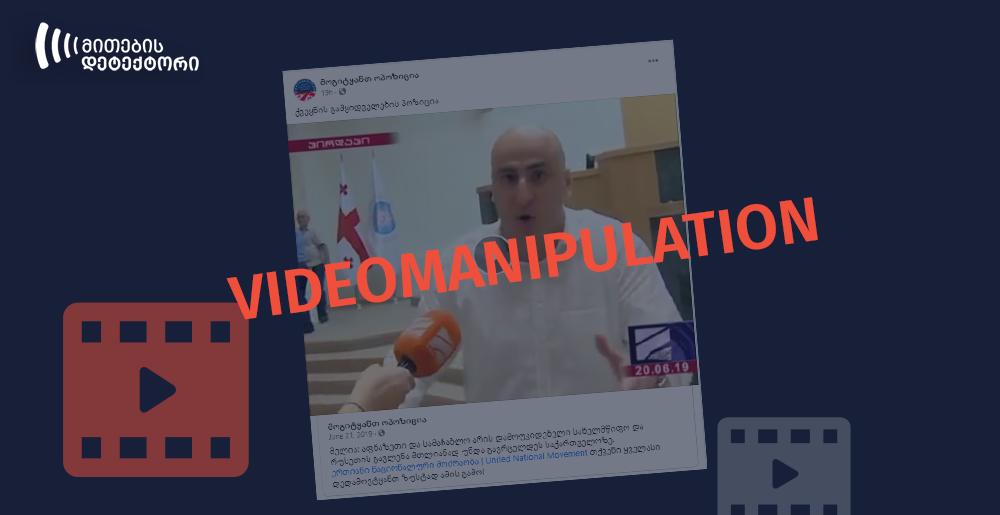 On November 8, the Facebook page „მოგი*ყანთ ოპოზიცია“ (F*ck Your Opposition) shared the video of Nika Melia, a member of the opposition party National Movement that was uploaded on June 21, 2019. Said video was shared with the following words: “Standpoint of Traitors of the Country”.  Video shows Nika Melia being interviewed by TV “Rustavi 2” in the Parliament chamber. Video footage has a logo of “Rustavi 2” that dates back to June 20, 2019.  In an 8-seconds long video Melia states the following: “ Everybody already knows that Abkhazia and Samachablo are both sovereign states and should be completely under the influence of Russia…”. 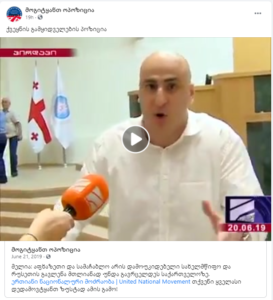 A video disseminated by the “F*ck Your Opposition” is manipulation because Nika Melia’s quote is incomplete and is disseminated without context. In reality, a complete version of the video shows that Nika Melia uses these words to demonstrate Russian Duma MP Sergei Gavrilov’s attitude towards Georgia.  Melia commented on the protest over the June 20, 2019 appearance of a Russian MP in the parliament of Georgia.

The 8-seconds long video published on the Facebook page “F*ck Your Opposition” on June 21, 2019, is a cut from Nika Melia’s interview that aired on “Rustavi 2” live on June 20, 2019. The appearance of Russian Duma MP from the Communist Party, Sergei Gavrilov in the Georgian Parliament Speaker’s seat during the session of the Inter-parliamentary Assembly on Orthodoxy (IAO) on June 20, 2019, sparked protest among the parliamentary opposition and Georgian citizens that gathered outside the parliamentary building. Nika Melia commented on the aforesaid protest.

Page “F*ck Your Opposition” cut the following part from Nika Melia’s quote: “And here they let in and allowed this person [Gavrilov] to occupy a seat who says what”… context necessary for properly understanding Nika Melia’s quote is lost without these words. In reality, in the video disseminated by the page “F*ck Your Opposition” Nika Melia uses this quote to demonstrate Sergei Gavrilov’s attitude towards Georgia and territorial integrity and not his standpoint.

“Myth Detector” also revealed video manipulations about Grigol Vashadze and Mikheil Saakashvili published by the Facebook pages “F*ck Your Opposition” and “Vai Bidziko”. You can find the articles via the links:

Link to the video archive: https://archive.ph/algMm