Annexation of Kartli-Kakheti or a Consequence of the 1917 Revolution – When did Tskhinvali Region Join Russia? 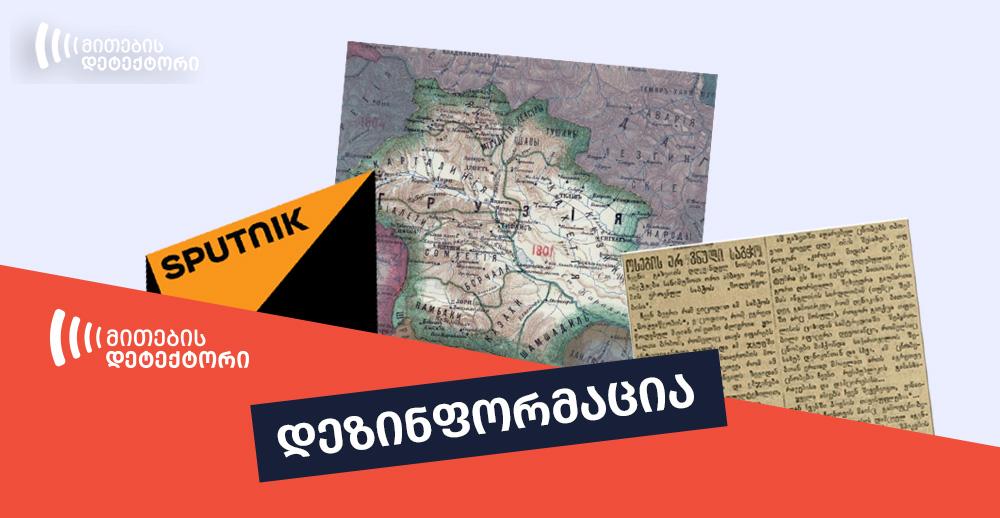 Teimuraz Tadtaev, historian: “The independence of South Ossetia has more political, legal, and historic basis than the independence of Kosovo. We joined the Russian Empire much earlier than Georgia. During the 1817 revolution, Ossetians fully expressed their will to stay in Russia. This then turned into genocide.”

Tadtaev’s claim that the so-called South Ossetia joined the Russian Empire earlier than Georgia and that Georgia carried out a genocide there after their declared will to stay in Russia in 1917, is false. In fact, 1. today’s Tskhinvali region territory joined Russia during the annexation of the Kingdom of Kartli-Kakheti; 2. in 1918-1921, the Democratic Republic of Georgia suppressed several rebellions, including the one organized by Ossetians, but the implemented measures did not target the ethnic group, so no genocide occurred.

Fact 1: Today’s Tskhinvali region territory joined Russia during the annexation of the Kingdom of Kartli-Kakheti.

During Russia’s annexation of Georgia, the latter was not a unified state – it was divided into kingdoms and principalities. In this period, the territory of today’s so-called South Ossetia was not a separate principality or kingdom, as it was a part of the Kingdom of Kartli-Kakheti. In 1801, the Emperor of Russia, Alexander I issued a manifest declaring the annexation of Kartli-Kakheti into Russia – presented to Georgians in the Sioni Cathedral on April 12, 1802. According to the manifest, the Kingdom of Kartli-Kakheti was abolished and became a governorate within Russia. This was followed by the abolition of other kingdoms and principalities by the Russian Empire.

In that period, the territory of the Kingdom of Kartli-Kakheti also included today’s so-called South Ossetia, including Tskhinvali and nearby villages. it is noteworthy that Russia administratively divided the abolished kingdom in a different way. The territory was split into five uyezds (counties) – Gori, Lore, Dusheti, Telavi, and Sighnaghi. The territory and the cities of the so-called South Ossetia, such as Tskhinvali and Java, were parts of the Gori county. Some parts of the Tskhinvali region were a part of the Dusheti county. 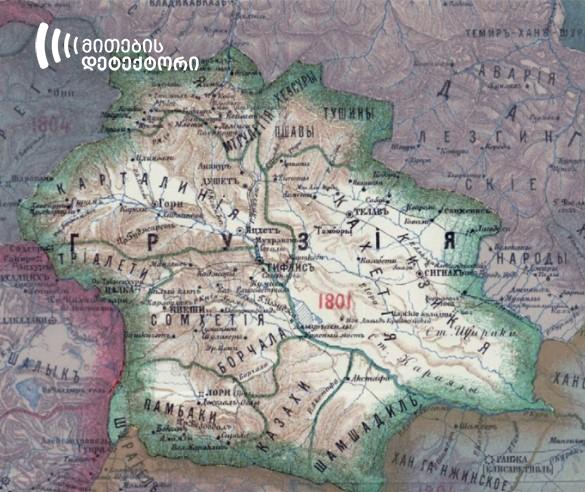 Kingdom of Kartli-Kakheti in 1801.

It is also noteworthy that Russia frequently names 1774 as the year when the North and the so-called South Ossetia decided to unite with Russia, but the given opinion contradicts the Treaty of Georgievsk, signed by the Russian Empire itself. The Treaty comes with a list of the princes, subordinate to Erekle II, including the noblemen from the territory of Shida Kartli (Eristavi, Machabeli, Kherkheulidze, Palavandishvili, Korintheli, Pavlenishvili, Rcheulishvili). Shida Kartli included the territories which Russia calls South Ossetia nowadays. Therefore, if the authority of Erekle II would not have covered this territory, the surnames of the local noblemen would not be in the list. The reason for sending the list was the fact that Article 9 of the Treaty of Georgievsk provided the same privileges to the noblemen of the Kingdom of Kartli-Kakheti and to the Russian noblemen. 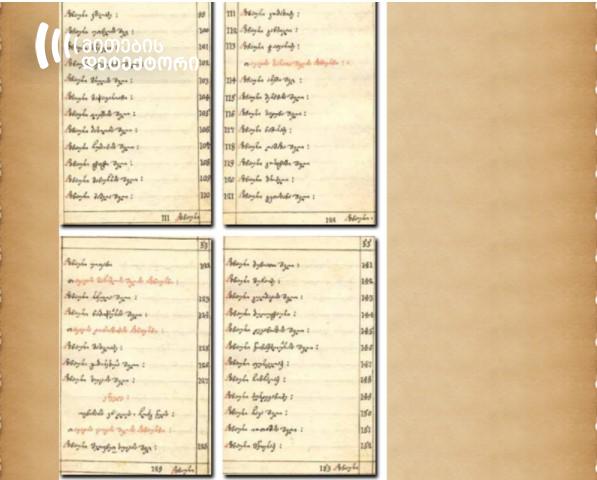 Brief list of surnames, sent by Erekle II to the Russian Empire during the proceedings of signing the Treaty of Georgievsk.

Fact 2: In 1918-1921, the Democratic Republic of Georgia suppressed several rebellions, including the one organized by Ossetians, but the implemented measures did not target the ethnic group, so no genocide occurred.

The request for autonomy was being discussed in the so-called South Ossetia from 1917, but the information about the genocide is not confirmed by historical sources.

In December 1917, an assembly of Ossetians took place in Tskhinvali. Akaki Chkhenkeli, speaking for the National Council, sent a greeting letter to the assembly. This was followed by a reply from Ossetians, serving as an evidence of good relations between Georgians and Ossetians in that period:

“National Assembly of South Ossetia says heartfelt thanks to the National Council of Georgia for brotherly greetings. … the assembly is sure that the solidarity between the peoples of Caucasus will strengthen only through the revolutionary democracy of the entire Caucasus.” 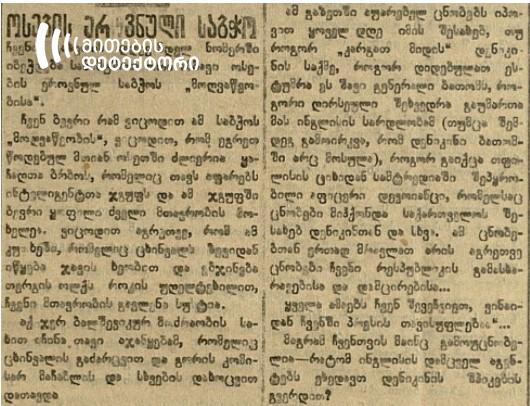 It is important to mention that several Ossetian rebellions, organized by Ossetian Bolsheviks, took place in the later period. In March 1918, Ossetian Bolsheviks initiated an uprising in Tskhinvali and Java, occupied Tskhinvali, and robbed and murdered Giorgi Machabeli, Sandro Ketskhoveli, Petre Epremidze, Kosta Kaziev and others. The given uprising was suppressed under the command of Alexander Koniashvili and Valiko Jugheli. This was followed by other widescale uprisings, supported by Russia and incited by Ossetian Bolsheviks. The Democratic Republic of Georgia managed to suppress the uprising in other cases too.

The suppression of rebellions resulted in casualties, but there is no sign of genocide that would allow the representatives of Russia or the so-called South Ossetia to claim otherwise. Various historical accounts confirm that a Georgian rebellion was also suppressed in this period, so this was not an action exclusively targeting Ossetians.

In 1918, debates concerning the Ossetian rebellion took place between the National-Democrats and the government. Historical accounts include an opinion that the ethnic group does not matter and that the anti-state rebellion is what matters – something in which both Ossetians and Georgians participated:

“But the government implemented similarly repressive measures against Georgians that organized an uprising too. As it is an unambiguous fact that not only Ossetians organized treacherous rebellions, but Georgians too… Ossetians might once again join Russia. However, don’t Georgian peasants also strive towards this in certain places? What does Ossetian identity, Ossetian people have to do with this at all?”

According to UN Convention on the Prevention and Punishment of the Crime of Genocide, signed by Georgia as well, genocide means “any of the following acts committed with intent to destroy, in whole or in part, a national, ethnical, racial or religious group, as such:

In the Ossetian case, the adopted measures were merely implemented to suppress the rebellion, and there was no evidence of the Democratic Republic of Georgia planning to destroy the Ossetian ethnic group, even on a smaller scale.

Russia and the so-called South Ossetia pay special attention the genocide issue due to political motives. An evidence of this is that in October 2006, the Parliament of the so-called South Ossetia adopted a declaration on the genocide of Ossetian people in 1918-1920. This happened after a statement by the President of Russia, Vladimir Putin, who labelled the 1920 events as a genocide of Ossetians by Georgians.

It is noteworthy that both above mentioned myths and falsifications of history have been voiced in a broad address by Putin, in which he noted that “Ossetia – with its Northern and Southern parts – joined the Russian Empire in 1774”. Putin also accused Georgians of Ossetian genocide in 1920.