Anecdotal Evidence on Coronavirus: From Sputnik to Clickbait Websites 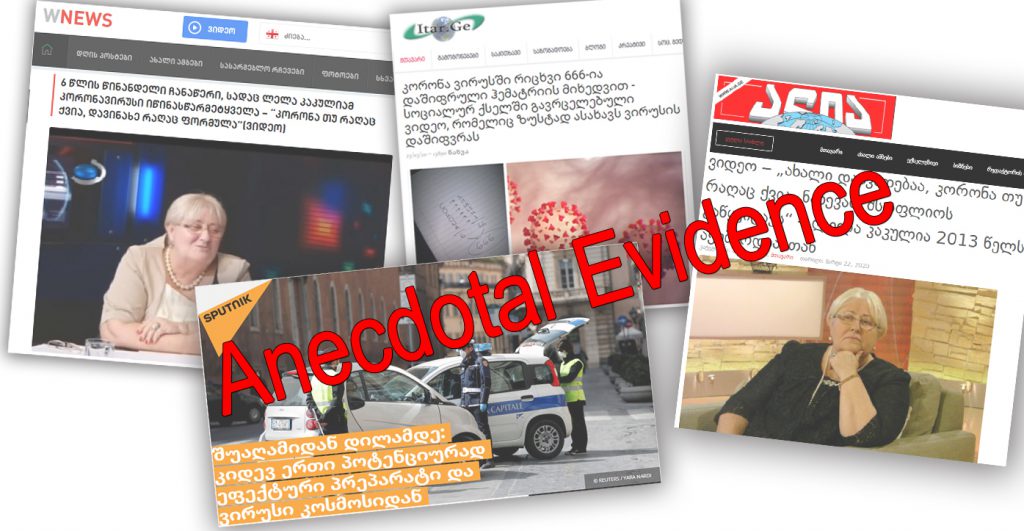 Anecdotal evidence and false beliefs about coronavirus are being spread not only by clickbait websites oriented to gaining profits, but also by Russian pro-government media outlets oriented to gaining political dividends. The Myth Detector offers the most absurd myths of the week, which are not subject to any verification.

1. Coronavirus was spread on the earth from the space

Sputnik-Georgia reported on March 23 quoting exobiologist Chandra Wickramasinghe of the Cardiff University that coronavirus was spread on the earth from the space, when a meteor exploded over China in October 2019.

On March 23, the clickbait websites itar.ge and wnews.ge published identical articles about coronavirus allegedly having an encrypted code 666 in its name. The articles are accompanied by a video, noting that according to alphabetical order, corona’s Latin name creates number 666. 3. Coronavirus is linked to Masons

On March 21, Facebook page “ექსკლუზივი TV” (Exclusive TV), positioning itself as a media outlet on myvideo, posted a video with a caption: “Where has coronavirus come from.” The video clarifies that if we read the Latin name of coronavirus back to front, we will receive surivan or oc that according to Google Translate means “sunrise and eye.” The video shows that Google identifies the words as belonging to Hindi language; however, actually no such phrase with the above mentioned meaning exists. Sputnik-Georgia reported on March 19 that Russian comedian Timur Batrutdinov sees the trace of Masons in the name of coronavirus if read back to front. Probably, it was precisely him who became the source referred to by Exclusive TV. On March 22, Alia’s online edition and a clickbait site wnews.ge released a video from Kavkasia TV’s archive, showing Lela Kakulia’s interview with Kavkasia TV’s program “Spektri.” In the video, Lela Kakulia claimed that she had predicted a virus named “corona” that would have destructed over one half of the world population. She also noted that she even saw a drug formula and wrote it down.

wnews.ge describes Kakulia’s remarks as her predictions made six years ago about new coronavirus (COVID-19); the article, however, says nothing about the fact that SARS and MERS coronaviruses had already existed in 2013.