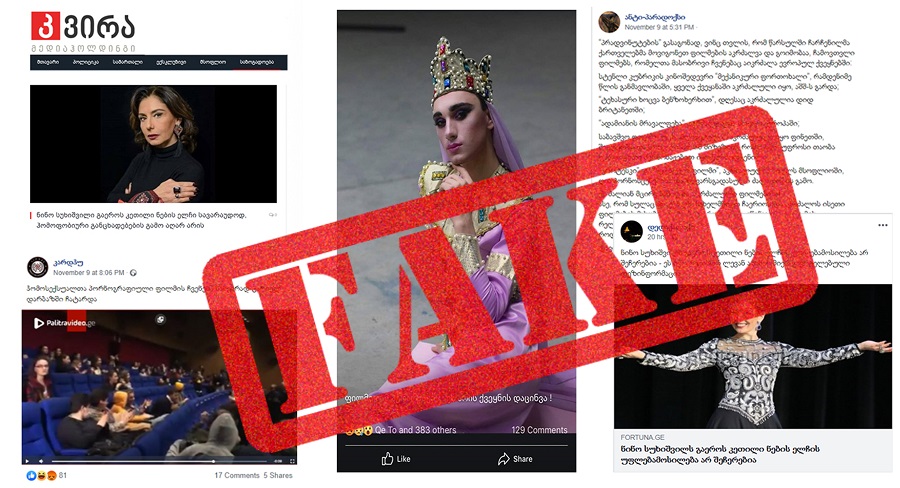 A Georgian-Swedish movie “And then We Danced” was shown in Georgian cinemas on November 8, 9, 10. Screening of the movie was met with protest and violent actions from hate groups. Facebook pages affiliated with hate groups and pro-Russian actors were disseminating fake and manipulated context about the movie with the aim of mobilizing public opinion. Facebook page (Anti-Paradox) affiliated with Georgian March highlighted initially how Russia Today viewers supported their actions in the comments.

On November 8, the first evening of the violent protest, a Facebook page ანტი-პარადოქსი (Anti-Paradox) affiliated with the hate group Georgian March published the facebook post accompanied by screenshots of Russia Today’s coverage of the ongoing protests in Georgia and supportive comments made by Russian users to the participants of the protest. Facebook post of Anti-Paradox was indicating how “Russian media giant” covered their protest and how RT viewers were supporting and justifying their actions. This post later was removed and is not accessible. Disinformation: Nino Sukhishvili was deprived of her position as a UN Goodwill Ambassador due to the criticism of  the movie.

The information as if the United Nations Office in Georgia has suspended Ms. Nino Sukhishvili, the National Ballet director as a National Goodwill Ambassador for Sustainable Development Goals was initially disseminated by an online edition  kvira.ge, soon followed by other media outlets and Facebook pages of hate groups. The suspension of the Goodwill Ambassador post by Nino Sukhishvili was connected to her position on the movie “And then We Danced”.

On November 9-10, the news was disseminated by the following sources:

Official representation of the United Nations in Georgia denied the information about Nino Sukhishvili in its official statement released on November 10.

Later, ultra-nationalist groups stated that Nino Sukhishvili was not deprived of her position and that the disinformation was disseminated by Levan Akin.

A photo has been disseminated on social media, depicting a man wearing Queen Tamar’s clothes. This photo was presented as a frame from the movie And then We Danced followed by hate comments and incitement of individual hatred towards the movie director.

In fact, the photo is manipulative, as it is not from the movie. The photo depicts a performer, Niko Tskhondia, wearing a Halloween costume in 2019. Another widespread narrative associated with the movie is the demand to ban it. The list of the movies banned in European countries for a certain amount of time was brought as an argument. Anti-Paradox published the list of banned movies on November 9 based on facebook post of Davit Mardaleishvili. The post mentioned that the state can interfere and ban the screening of movies that go against religion, politics, or ideology.

In fact, the temporary ban on the movies listed in the post was not associated with religious, political, or ideological reasons. The reason, in most cases, were violent scenes.

Disinformation: The movie And then We Danced is a Pornography

According to one of the narratives around the movie And then We Danced, it is a pornography. The Head of Yevgeny Primakov Georgian-Russian Public Center, Dimitri Lortkipanidze, addressed the Ministry of Internal Affairs of Georgia with the request to investigate the allegedly pornographic nature of the movie. The MIA reviewed the inquiry and decided that the movie does not contain signs of pornography.