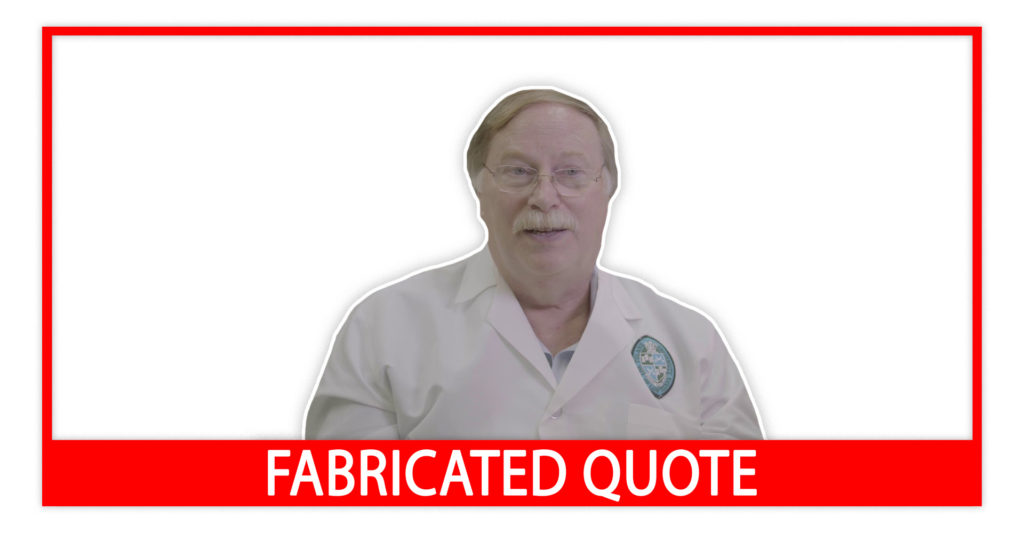 On December 3, 2020, Facebook page სინანული გადაგვარჩენს (Repentance will save us) and anti-vaccination activist Shore Shanidze published identical posts, as they claimed, about a scandalous statement made by American scientist, Robert Garry. According to the post, in his statement dated December 1, 2020, Robert Garry notes that 5G high-frequency towers were installed to control humans implanted with microchips, whereas the Masons and the Rockefellers allocated millions of U.S. dollars to finance the coronavirus vaccine in order to implant microchips in humans and control them through special computers and 5G technology. The statement ends with the calls against the coronavirus vaccine, because, according to the post, it will cause fatal side effects in a couple of years.

The post published by Facebook page სინანული გადაგვარჩენს (Repentance will save us) is accompanied by the images of a vaccine and a cell tower, while Shore Shanidze adds the photo of American virologist Robert Garry. 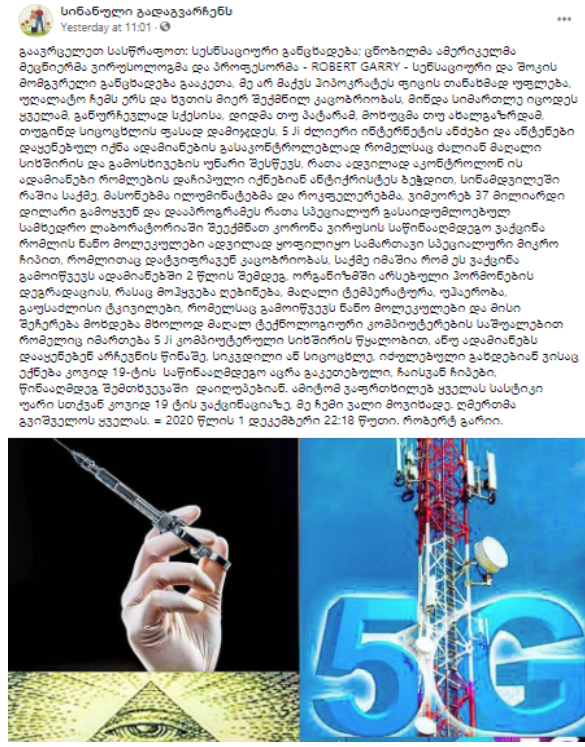 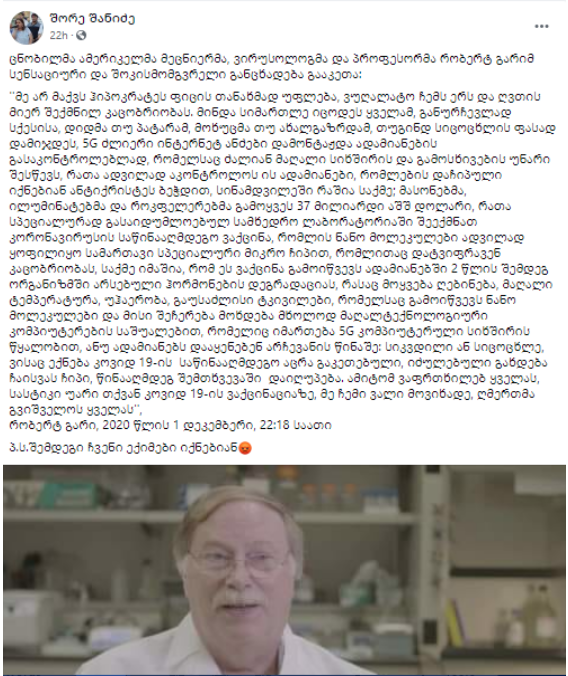 The quote attributed to American virologist Robert Garry is fake. In fact, the fabricated quote about 5G technology and COVID-19 vaccine contains disinformation and conspiratorial statements. Neither 5G technology, nor the coronavirus vaccine aimed at human chipping.

The statement attributed to Robert Garry about 5G technology and the coronavirus vaccine cannot be searched through open sources. American scientist Robert Garry is Professor of Microbiology and Immunology at Tulane University School of Medicine in New Orleans, Louisiana. Dr. Garry is currently managing a consortium of scientists who are developing countermeasures, including diagnostics, immunotherapeutics and vaccines, against Lassa virus, Ebola and Marburg viruses, and other high consequence pathogens. Presently Prof. Garry is researching COVID-19 at Tulane University. In the interview published on Tulane University’s website on September 25, 2020, Robert Garry made the following statement about the coronavirus vaccine:

Robert Garry: “People are working as fast as they can on this – getting a vaccine approved in the next couple of months, it could happen. But the next step of distributing it to the people who really need it, that will take many more months after that… If we’re distributing vaccine to the folks that really need it by the middle of next year, we’ll be doing quite well.”

It is worth noting that Robert Garry is one of the co-authors of the study on origin of SARS-CoV-2 published on March 17, 2020. It was one of the first studies that found through comparative analysis of genomic data that COVID-19 originated via natural selection. Robert Garry’s image used in Shore Shanidze’s post is a screenshot from the video posted on Tulane University’s YouTube channel on March 19, 2020, where Garry speaks about the findings of the study and explains why the coronavirus is not artificially created. 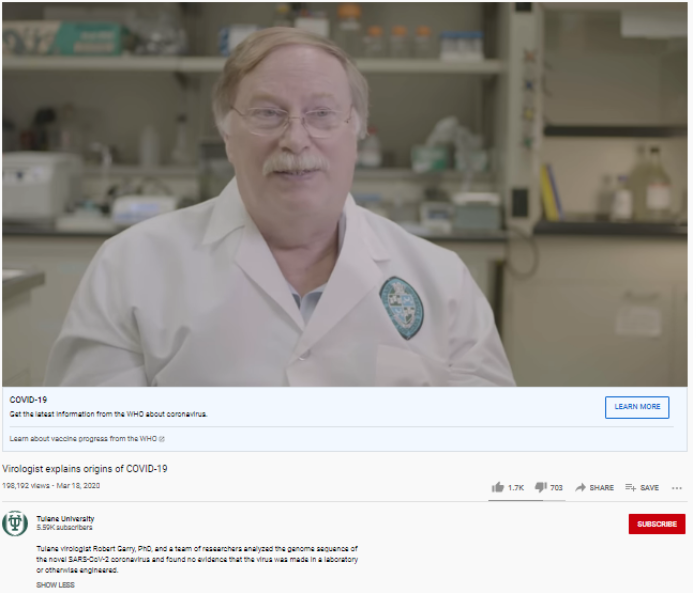 The outbreak of COVID-19 has promoted conspiracy theories targeting 5G technology and vaccines. The post claims that the purpose of installation of 5G towers is to impose total control on humans that will become possible through microchips implanted in humans along with the coronavirus vaccines. Conspiracy theories about 5G networks first emerged on social media in January 2020 and since then the new technology has been linked to the coronavirus in various contexts. According to the most widespread disinformation, people get sick not from the virus, but radio waves emitted by 5G towers. However, Radiation watchdog and the World Health Organization claim that 5G technology poses no threat to human health and it has no influence on the spread of virus.

See detailed information about conspiracy theories and disinformation regarding 5G technology in the following articles prepared by Myth Detector:

The claims as if the global elite are financing COVID-19 vaccine to implant microchips in humans and increase fatalities are spread quite frequently. Amid the coronavirus pandemic, researchers and pharmaceutical companies are testing over 100 experimental vaccines. Private companies, as well as government and international organizations and private charities are involved in the process of creation of vaccines. Among them is the Rockefeller Foundation that allocated USD 5 million to Gavi, the Vaccine Alliance. Thus, the claim as if the Rockefellers are secretly financing vaccines is a conspiracy theory.

Besides the Rockefeller family, conspiracy theories about the coronavirus vaccine were spread against Bill Gates, American business magnate and philanthropist. According to these conspiracy theories, the goal of the support provided by Bill Gates for vaccines is to implant microchips in humans and achieve depopulation.  See detailed information in the following articles prepared by Myth Detector:

One more widespread conspiracy theory about the world population chipping has long been circulating on the Internet. It has been linked to various developments, including the coronavirus pandemic. Disinformation as if a microchip will be implanted in humans along with the coronavirus vaccine first emerged on Georgian social media in March 2020. Astrologist Mikheil Tsagareli and Tvalsazrisi.ge spread disinformation about the plans of human chipping. It is worth noting that Mikheil Tsagareli first spoke about microchips in 2017, noting that chips would be placed under the skin of humans to further control them.

See details about conspiracy theories and disinformation regarding microchips in the following articles prepared by Myth Detector: