Alt-Info, the Organizer of the Violence against Journalist, Claims that Journalists are Unable to Identify the Culprits 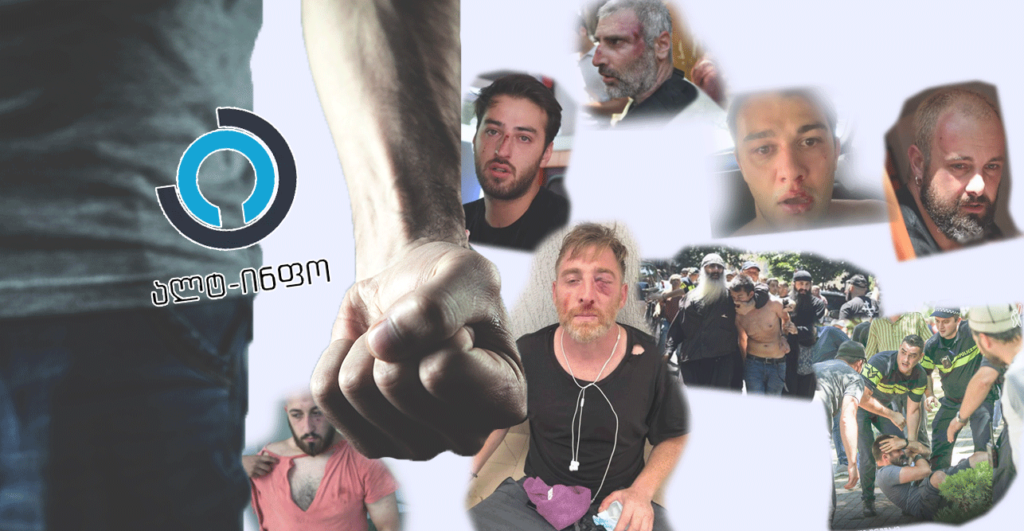 On February 2nd, 2022, Shota Martinenko, the member of the “Conservative Movement”  part and one of the hosts of the “Alt-Analytica” program on Alt-Info TV, spoke about the victims of the July 5th violent demonstration, stating that according to court footage, witnesses and victims are unable to identify the culprits:

Shota Martinenko, Host at Alt-Info: “We filmed all the court hearings and took all the footage where the witnesses were asked, ‘Have you seen any of them and can you identify someone?’ Here, we showed all those shots and all the answers to the question. We could not find a single shot of where anyone says, “This is the one who hit me.” There is no such recording; no one can identify these people, right? There are no facts…”

Martinenko’s statement is false. In addition to publicly available footage of violence against journalists by specific individuals on July 5th, according to victims’ lawyers, some of their protégés were able to identify the attackers. Consequently, the allegation that there is no evidence to prove the guilt of the detainees is disinformation.

The rights of victims of the July 5th demonstration are defended by several organizations, including the Georgian Democratic Initiative (GDI) and the Georgian Young Lawyers’ Association. Myth Detector contacted them for nuanced information.

The Georgian Democratic Initiative (GDI) is defending the interests of RFE / RL journalist Tornike Mandaria, who was attacked and physically assaulted on July 5th along with his colleague RFE / RL reporter Davit Koridze.

Giorgi Kakhiani, born in 1984, accused of violence against RFE / RL journalists, was arrested on July 10th.

As Mariam Kapanadze, a spokeswoman for the Georgian Democratic Initiative, told Myth Detector, RFE / RL reporters identified the assailant among seven other defendants.

Notably, there are several shots showing specific individuals attacking journalists. On July 5th, the footage was released showing how one person tried to hit journalists with a scooter. The Ministry of Internal Affairs announced the person’s arrest on July 6th. The detainee, Zaza Chaava, told the court that the scooter brake had been damaged and that he would not hit the journalists intentionally. “If anyone thinks I was abused, I will answer,” he said. However, the footage shows Chava repeatedly trying to hit a moped for journalists. 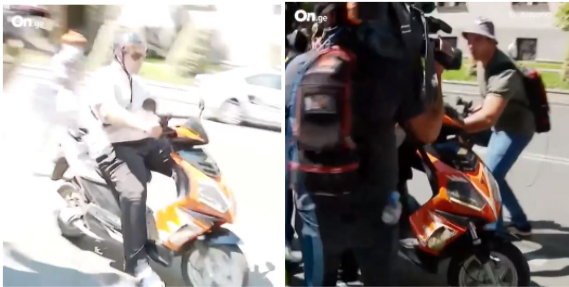 It should be noted that a clergyman, Andria Getsadze, tried to justify Chaava’s actions and blame the journalist on his Facebook page. He posted a video that was edited in a way that did not reflect the full version of events. After “Myth Detector” marked the video on Facebook as manipulative, it can is no longer be searched on the page of the cleric. Read more about this topic in the “Myth Detector” article:

In another case, the footage taken by Tabula’s journalist Mako Jabua shows her being physically assaulted by one of the rally participants carrying a flag. The journalist was recognized as a victim by the prosecutor’s office, while the attacker was arrested. In an interview with Radio Liberty, Jabua said that since the detainee did not want the identification procedure to occur face-to-face, she identified the attacker in a photo.

Georgian Young Lawyers’ Association protects the rights of up to 20 victims. GYLA’s lawyer Nona Kurdovanidze told Myth Detector that some of their clients were able to identify the abusers.

It should be noted that the report published by the Georgian Young Lawyers’ Association on December 8th, 2021, states that the victims were not provided with information on video materials requested from the media or private individuals in time in accordance with the law. Also, the parts of the criminal case related to the organizers of the group violence and those who made public calls for violence were not transferred to the organization.

Notably, the representatives of Alt-Info themselves were the organizers of the violent actions and instigators of violence. For example, one of the founders of Alt-Info, Konstantine Morgoshia, called on those gathered in front of the parliament on July 5th to move to the office of the “Shame Movement” since the members of “Tbilisi Pride” were there. Aleksandre Lashkarava, the cameraman of the First TV Company, was attacked near the office of the “Shame Movement” and was severely beaten there. 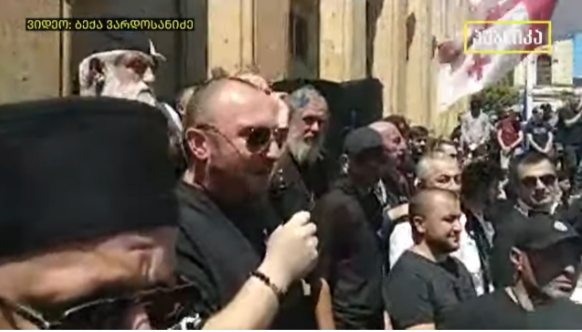 Konstantine Morgoshia and Zura Makharadze have been disseminating the messages of the call for violence prior to July 5th as well:

Konstantine Morgoshia, The founder of Alt-Info: “Alternative for Georgia” and “Alt-Info” will obviously start to mobilize people, and I am sure that there will be many of us. So that they will not only be able to hold the March, but they would find it inconceivable that something similar might ever happen. No one will be able to protect them. I am telling you this directly!”

Zura Makharadze, the host of Alt-Info: “If they call us abusers, then yes, I am an abuser! I can and will defend my values, even if I have to resort to using force. We will not distance ourselves from any violence if this violence protects our homeland and values.”

Despite the claims of Alt-Info representatives that they could not control the “angry people,” there are footages where Zura Makharadze is negotiating with the head of the patrol police Vazha Siradze and tells him that he will be able to control the situation on the ground: “How long do you want? I promise you, tell me how long you need to arrive there… I promise nothing will happen here in the next ten minutes … until you return, I promise nothing will happen here.“- says Makharadze.

On July 16th, police searched the homes of Konstantine Morgoshia and Zura Makharadze. They were also taken for questioning, although the investigative actions did not yield any results.

Read more about the messages and calls for violence in the wake of the July 5 violent rally in the Myth Detector study:

Read more about the violent rhetoric of Alt-Info representatives in the “Myth Detector” article: