Alt-Info Hosts Claim that, Unlike the West, Russia is a Security Guarantor of Its Partner Post-Soviet Republics 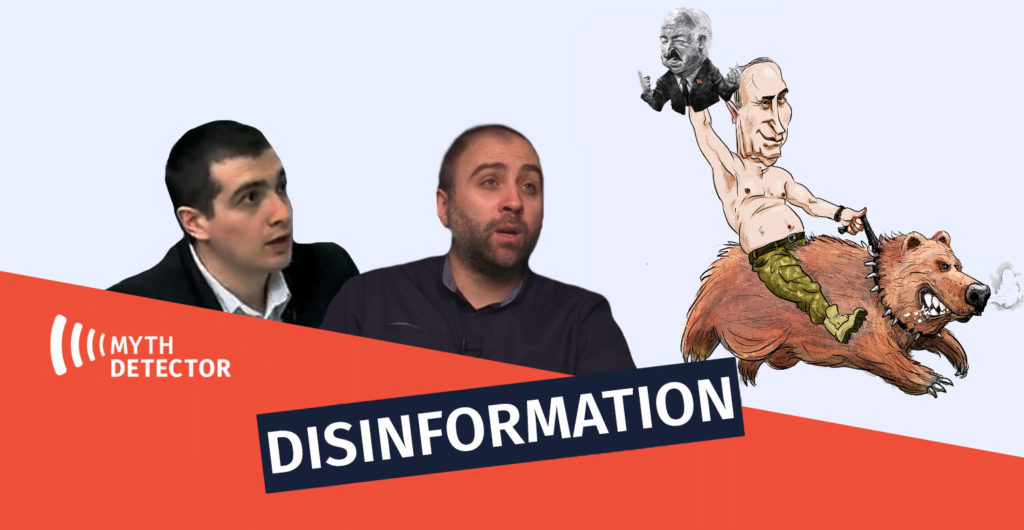 On February 17th, an excerpt from the “Alternative Vision” program about Belarus was circulated on Alt-Info’s Facebook page and YouTube channel. The beginning of the video also features the comment of Zura Makharadze, the Alt-Info host and a member of the Conservative Movement. In response to a journalist’s question – to name one of Russia’s developed allies, Makharadze says Belarus is such an example, adding that better position than Georgia. In the program, Zura Makharadze lists the reasons why he believes Belarus is in a better position than Georgia. Among them is the argument that Belarus has an ally in the form of Russia, which ensures its security and territorial integrity.

In the same program, Shota Martinenko, another member of the conservative movement, stated that the question asked by the journalist is “brainless” because it lacks the historical and geographical context, and the comparison should be made between the former Soviet Union republics. Martinenko claims that those countries that have chosen to ally with Russia are more secure and have more economic stability than those who have decided to ally with the West:

Zura Makharadze: “Those [of the former Soviet Union] who are [Russia] ’s allies are much better than those who are enemies.”

Shota Martinenko also claims that the U.S. allies have failed in the region for the past 30 years, and those who chose Russia are both secure and economically stable:

Shota Martinenko, Host at Alt-Info: “In this region, name an ally of the United States that has been successful and has not suffered catastrophic failures in the last 30 years. Those who chose the direction of Russia are protected and have more economic stability than the part which made the [choice] against it.”

The claim of the Alt-Info host that Russia’s allies from the post-Soviet space are safer and more economically stable than the allies of the west is false. A comparison of gross domestic product per capita shows that the Baltic States are at least twice as far ahead of Russia and its allies. Furthermore, the claim that Russia, unlike the West, is a guarantor of security in Belarus and other allied countries of the post-Soviet space is false as well. In the last two years alone, there have been several armed conflicts on the territory of the CSTO member states, in contrast to the NATO member states in the Baltic States.

According to Alt-Info hosts, among the countries of the post-Soviet space, those who chose to ally with Russia are more economically successful than those who went against Russia. According to them, the real question is whether there is a U.S. ally in the region that has not suffered catastrophic failures in the last 30 years. These allegations are untrue, as the three former Soviet Union members, which are currently members of the European Union and NATO and, consequently, allies with the United States, are economically far ahead of both Russia and Russia itself. Data from Estonia, Latvia and Lithuania over the years show sharp growth since the 1990s. Consider the GDP per capita.

The charts below demonstrate that after the collapse of the Soviet Union, until the 2000s, when economic, social and political reforms were still underway in these countries, the figure did not exceed USD 5,000. As a result of successful reforms, the GDP per capita has reached USD 20,000 by 2018. 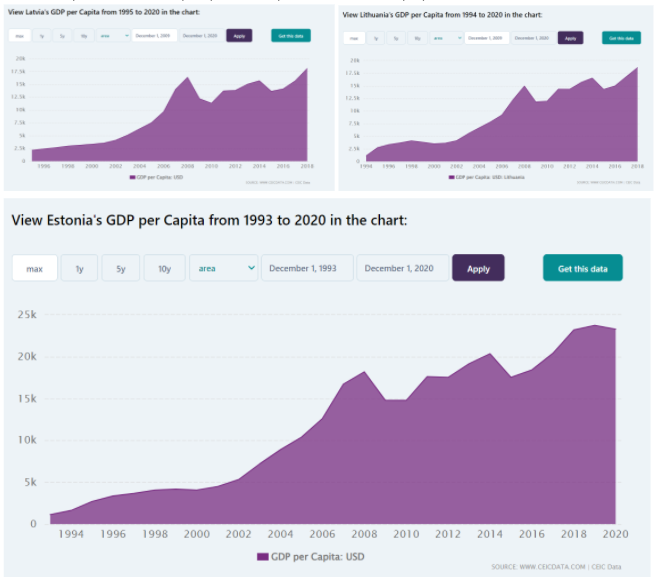 As for Russia and its allies, Belarus and Kazakhstan, although they benefit from a considerably larger set of natural and territorial resources compared to the Baltic states, by 2018, they were lagging behind in terms of GDP per capita considerably. For Belarus, the figure was around USD 6,000, while for Kazakhstan and Russia USD 10,000. 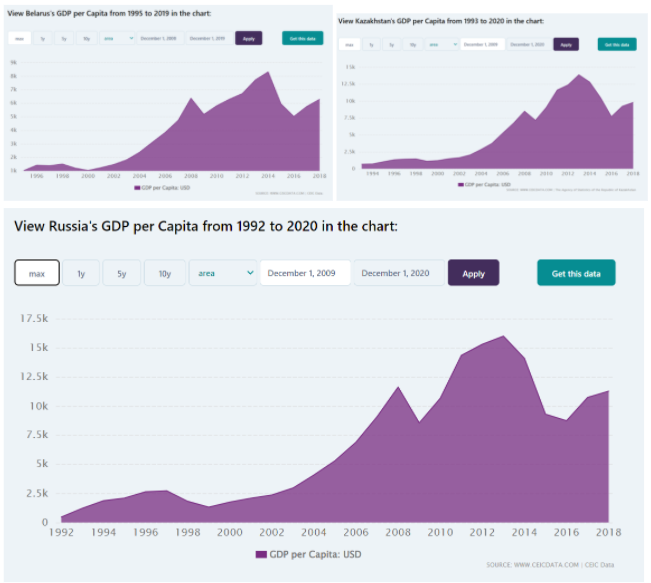 Alt-Info host Zura Makharadze claims that Russia ensures the security of Belarus so that no one will invade its territory. However, he did not mention the fact that Russia currently has its own military units on the territory of Belarus, and the security guarantees that Makharadze is talking about are aimed not at protecting the Belarusian people but at the Lukashenko regime.

Although joint military exercises between Russia and Belarus were due to end on Sunday, February 20th, Russia has used the excuse of the exacerbated situation in eastern Ukraine to leave up to 30,000 troops in the territories of Belarus.

Notably, Russian military assistance does not aim to ensure the security of the Belorussian people but to ensure the persistence of the Lukashenka regime. After the rigged presidential election in 2020, the Lukashenko regime has repeatedly dispersed demonstrations. At least 4 people were killed, more than 1,300 were injured, including children, 50 were missing, and more than 32,000 people were arrested. Some of them were beaten and tortured in prisons. According to the assessment of the ‘Reporters without Borders’, the regime targeted journalists, and in 2020, Belarus was declared as the most dangerous country in Europe for the media.

It is noteworthy the case of the hijacking of a plane by the Belarusian authorities and the arrest of a Belarusian journalist on board, Raman Pratasevich, was justified by the Kremlin and its affiliates including representatives of Alt-Info.

A group of former Belarusian dissidents and security service officers called BYPOL has launched an investigation that revealed that Russian-led forces in Lukashenko’s regime used weapons, including lethal weapons, to quell protests. Putin also promised Lukashenka to create a special reserve for him against his own people and to mobilize it in Belarus.

The degree of dependence of the Lukashenko regime on the Russian Federation may cost Belarus its sovereignty. Lukashenka told the Russian media that Russia and Belarus work as one state. Despite his assertion that such integration should not be seen as Belarus’ will to be a part of Russia, the fact remains that Lukashenka has already changed a number of positions in favour of the Kremlin, such as recognizing annexed Crimea as Russian territory and saying he is considering recognizing Georgia’s occupied territories.

The claim that Russia provides security for its allies in the post-Soviet space, which reduces the likelihood of conflict on their territory due to the support of a nuclear state, while the Western Allies provides no security guarantees, is false. For example, in the last two years alone, there have been numerous armed confrontations in Armenia, Kyrgyzstan and Tajikistan, members of the Collective Security Treaty Organization (CSTO) created by Russia. Not to mention, the Baltic States, whose security is guaranteed by the North Atlantic Alliance, did not engage in any significant political conflict.