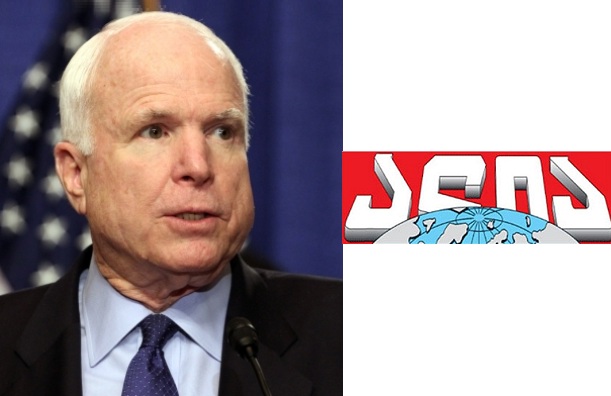 The newspaper “Alia” 9-15 January 2016 issue published an article by journalist Gela Zedelashvili entitled “The real reasons behind John McCain’s visit in Georgia”, in which he argues that the United States does not give any financial assistance to Georgia, and that McCain’s visit was only symbolic.

Gela Zedelashvili, journalist: “Congress has allocated $38,2 billion to Israel in 10 years, which turns out to about $ 4 billion a year. Now that they’ve arrived, why haven’t they let their voices be heard about assistance to Georgia? When it comes to Israel, it is a serious matter, coming to Georgia, on the other hand, is just for show. “

The information given above is erroneous, according to the following facts:

As reported by USAID, in the period of 1992-2014 the US has assigned more than $ 5 billion to Georgia in financial assistance, of which a large portion comes as economic aid.

In 2014 only, Georgia received $ 289,479,545 million in aid from the US, including $ 235 million in economic backing, while $ 53 million was directed to the strengthening of the economic sector. The latter sector includes such fields as trade, labor, health care, etc. The programs of this sector included an initiative to eliminate hepatitis C, which is supported by the US Centers for Disease Control and drug manufacturing company “Gilead”. The military sector patronage is associated with the international military education, exercises and such.

The US financial aid to Georgia, is significantly higher than the average amount of aid to European countries ($ 6,33 million), as well as assistance for countries around the globe ($ 25.9 million).