Actors Who Mobilized on Social Media to Defend Ivanishvili’s Family 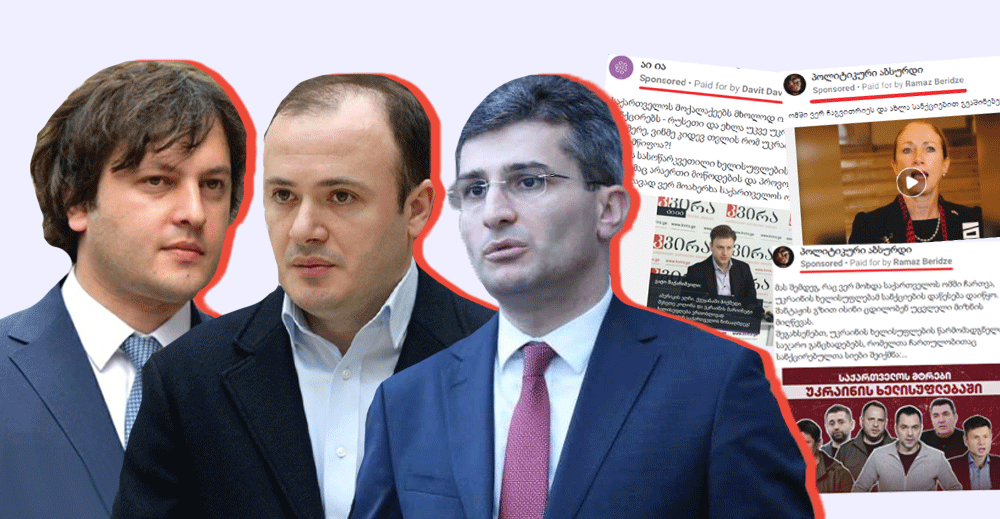 Through the monitoring of Facebook accounts in the period of October 19-25, “Myth Detector” identified messages from the ruling party, government experts and pages directly or indirectly affiliated with the government, which manipulatively connected the imposition of sanctions with the alleged attempts to drag Georgia into the war. Namely:

The following actors have been disseminating the above-mentioned messages:

After the imposition of sanctions on Ivanishvili’s relatives by the Ukrainian authorities, On October 21, the Facebook page “Mikheil Ukrainologist”, which supports the government and discredits the opposition, published a video collage with the following description: “How the Ukrainian government is trying to drag Georgia into the war from the beginning of the war until today.” The video shows statements made by the President of Ukraine, Volodymyr Zelenskyy, and his team about Georgia at different times. 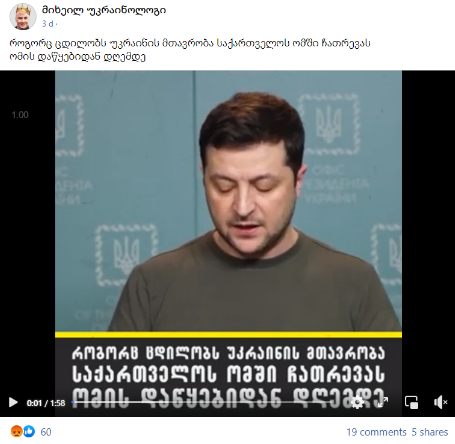 On October 21, anti-opposition and pro-governmental Facebook pages “Terenti Gldaneli,” “Political Absurdity,” and “Time for Truth,” distributed a video collage in a coordinated manner, which allegedly showed the desire of the Ukrainian government, the West and the Georgian opposition to drag Georgia into the war with Russia. The videos were accompanied by the following captions: “They failed to drag us into the war and now they threaten us with sanctions?”; Get involved in the war, or we will sanction you; this is the position of the Ukrainian government”; “Our “well-wishers”. The target of the mentioned clip was not only the Ukrainian authorities but also the US ambassador to Georgia, Kelly Degnan, opposition leaders and representatives of the civil society.

On October 21, the Facebook page “Political Absurdity” published another post, stating that the Ukrainian government is now using blackmail to achieve its unchanged goal of dragging Georgia into the war with Russia. 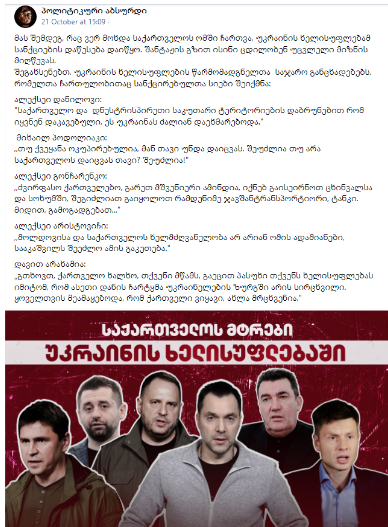 The public movement “Ai Ia” sponsored the opinion of the representative of the same movement, Vato Shakarishvili, where he accused the Ukrainian government of organizing provocations and imposing sanctions. The statements of the member of the parliamentary majority, Levan Karumidze, and the philosopher Zaza Shatirishvili were also sponsored by the government-affiliated Facebook page GeoPress, which positions itself as a news agency.

The posts published by the Facebook page “Political Absurdity” were sponsored, emphasizing the alleged attempts of Ukrainian authorities to blackmail Georgia and drag it into the war with Russia. 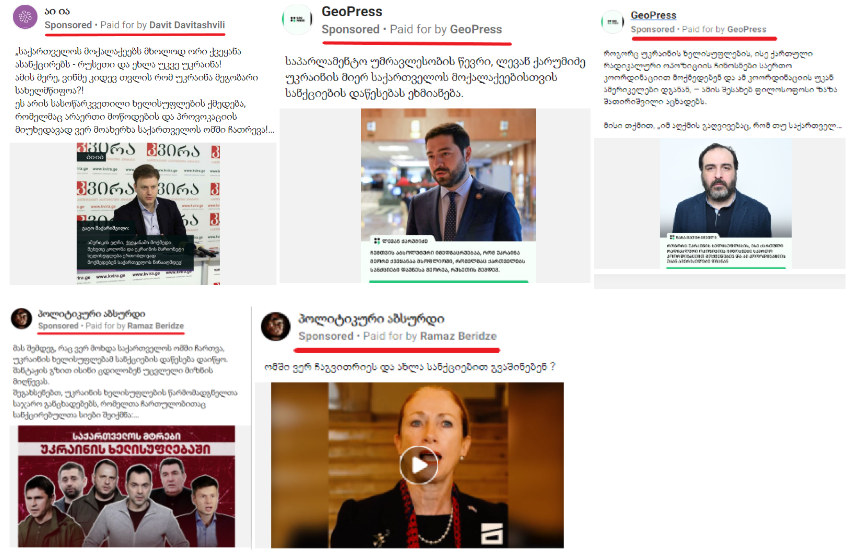 Representatives of the ruling party and selected pro-governmental experts compared the sanctions imposed on Bidzina Ivanishvili’s relatives to Russian sanctions and noted that Ukraine is the second country in the world after Russia to impose sanctions on Georgia.

According to pro-governmental experts, the Government of Ukraine is in direct coordination with the ‘Georgian Dream’s opposition” and the United States, which act against the incumbent Georgian government.