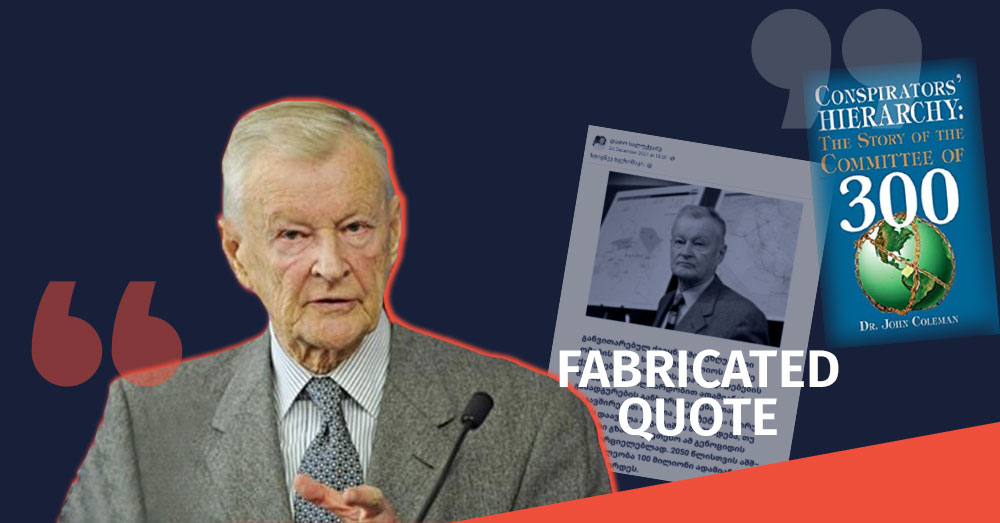 On December 24th, 2021, Facebook user Dato Salukvadze published a quote allegedly belonging to Zbigniew Brzezinski, the former adviser to the US President. Namely: “By means of limited wars in the advanced countries, and by means of starvation and diseases in the third world countries, the death of millions of people, the Committee of 300 has commissioned Cyrus Vance to write a paper on this subject of how to bring about such genocide. the population of the US is to be reduced by 100 million by the year of 2050.” 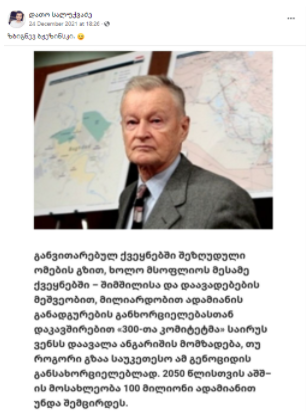 The alleged quote of  Zbigniew Brzezinski is fabricated. The words attributed to Brzezinski are, in fact, from a 1992 conspiracy book about the goals of the Committee of 300, written not by Brzezinski but by John Coleman.

According to the Google search engine, the English version of the quote is actually a segment of the 1992 book ‘Conspirators’ Hierarchy – The Story of The Committee of 300’ by John Coleman. The author discusses the 21 secret goals of the Illuminati and the committee of 300. The quote published by Dato Salukvadze matches the 9th point of the book: 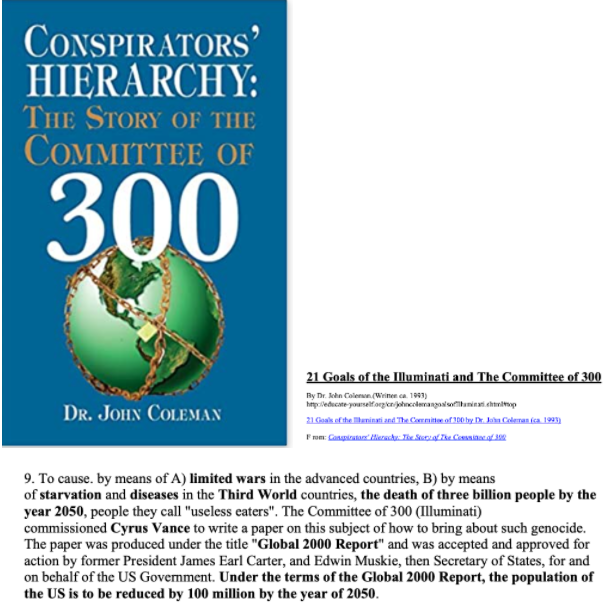 According to a review by Google Books, John Coleman develops the idea that the world has been ruled and controlled by a group of aristocratic conspirators since 1897. The book assumes that the “Committee of 300” mainly targets America and the American public, and its pre-conceived plan is to form a united world government. Although conspiracy theories about the “Committee of 300” are widespread, there is no credible evidence for the existence of such an organization. For one of the conspiracies related to the “Committee of 300”, see the material of “Myth Detector”:

In addition, we find some factual inaccuracies in the quote from Coleman’s book. In fact, the Global 2000 Report was commissioned neither by the Committee of 300 nor by Secretary of State Cyrus Vance (January-April 1977). Published in 1980 under the direction of President Jimmy Carter, the three-volume Global 2000 Report contains forecasts from the 1980s for the world population and the number of resources available to the 21st century.

Fabricated quotes of Zbigniew Brzezinski concerning the control and reduction of the population have been fact-checked by “Myth Detector” in the past as well. See our materials: