A Libyan terrorist or Iphone 7 Stanislavovich? Poland or Ukraine? – How true is the evidence? 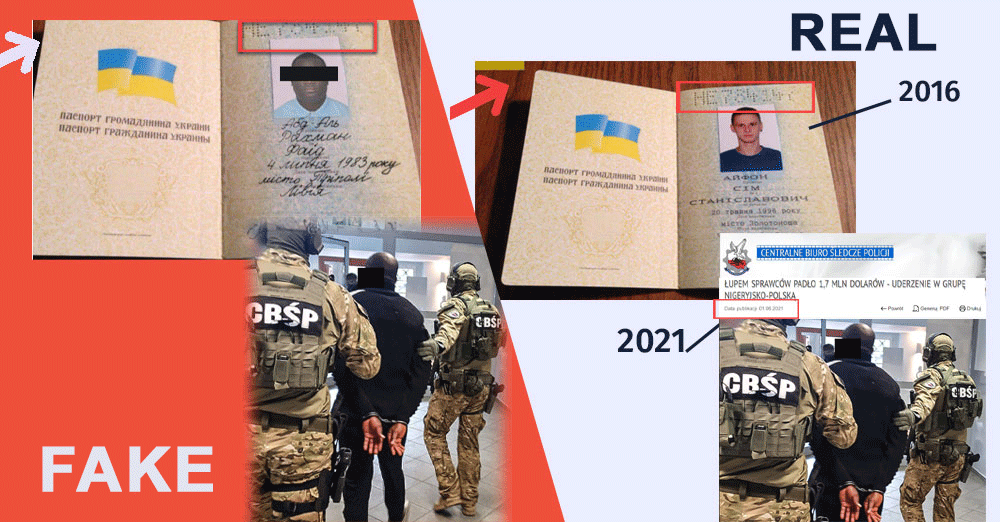 On 26 July, the Russian-language media outlets ( avia.pro, glavny.tv, smolnarod.ru) published an article in which it was alleged, based on Telegram channel, that Turkey-controlled Syrian and Libyan terrorists had been spotted in Ukraine. A Georgian-language pro-Kremlin online media outlet, Georgia and World, published identical information based on avias.pro.

The articles alleged that the terrorists, to hide the trace, were distributed Ukrainian passports and one of them was arrested when he tried to enter Poland from Ukraine. He was arrested for an illegal trade in arms. The information was illustrated with two photos which, as asserted by the online editions, evidenced the aforementioned fact. One of the photos shows a passport belonging to Abu al-Rahman Faid. Another photo shows the arrest where the face of the arrestee is blurred and hence, he is not identifiable.

The allegation about spotting Syrian and Libyan terrorists in Ukraine is based on false evidence. The photo of the arrest was taken in 2021 and it does not show Ukraine but features the arrest of members of a criminal group arrested on charges of money extortion by Poland’s Central Investigation Bureau of Police. The photo in the published passport is altered with the use of editing software. The passport with the identical number can be traced in the Internet under the name of Iphone 7 Stanislavovich since 2016.

The released information about Syrian and Libyan terrorists spotted in Ukraine rests on false evidence. The photo that, according to the Russian media, shows the arrest of the terrorist was published on the webpage of Poland’s Central Investigation Bureau of Police on 1 June 2021. The shots feature the arrest of five individuals (a polish, a Ukrainian and three Nigerian citizens) on charges of organized crime. They were accused of extorting 1,7 million USD from a German company through a fraudulent scheme.

Yet another “evidence” published by the media is the passport bearing the number HE784147 and the name of holder, Abu al-Rahman Faid, which is written by hand. It has been discovered through TinEye reverse image search engine that the passport with the identical number can be traced in the Internet since 2016.

In 2016, the Ukrainain electronic equipment company, Allo, launched an action for customers, titled “What would you do to get Iphone 7?” According to the company, the first five customers who would change their names into Iphone 7 would be able to purchase the mentioned Iphone model for a symbolic price of 1 hryvnia. One of such customers, with the passport number HE784147, changed his real name Aleksander Panin temporarily into Iphone 7 Stanislavovich to get the Iphone. The passport number which, according to Russian media, belongs to Abu al-Rahman Faid, is in reality the passport number of Iphone 7 Stanislavovich, one of the participants of the abovementioned action.