5 Messages and 12 Trolls against the State Inspector Londa Toloraia 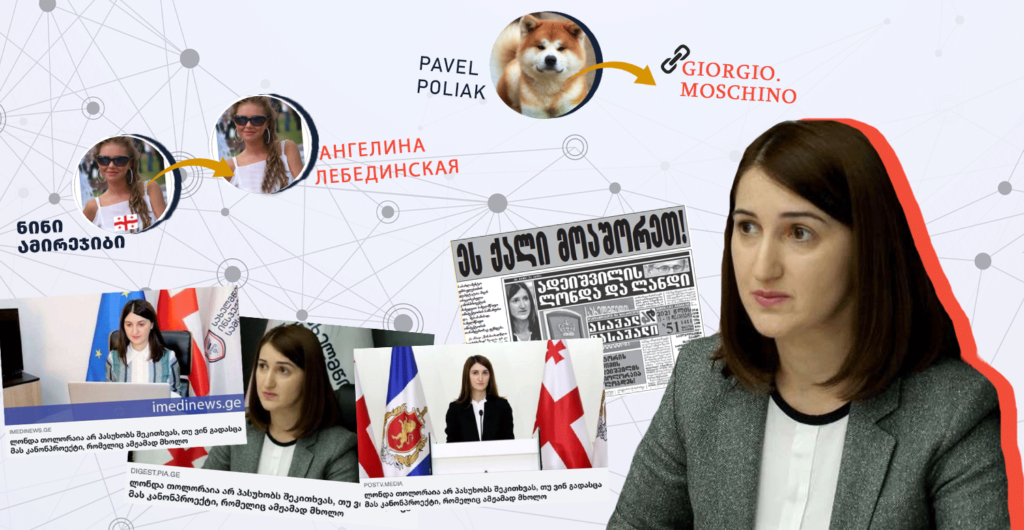 On December 25th, the Georgian government revealed its plans to abolish the State Inspector’s Office and create two new supplementary agencies. The State Inspector herself responded to the information, noting that she had found out about the “conspiratorially” initiated change regarding the abolition of her service from the media. She further noted that the change cannot be perceived as a reform but an action against an independent institution and the staff of the agency. Non-governmental organizations operating in Georgia have also criticized the government’s decision, calling it a deliberate, planned attack and retaliation against the independent agency, and called on the authorities to stop deliberate attacks on independent institutions and allow the inspector to fully implement her mandate. The office of the UN High Commissioner for Human Rights also called on the authorities to withdraw the initiative, while the US Ambassador to Georgia, Kelly Degnan, stressed that the process was hasty and disturbing. The chairman of the Council of Europe Commission on Human Rights, Dunia Miatovich, called on the Georgian parliament to refrain from the rapid adoption of the bill, stressing that if passed, the bill, which abolishes the Office of the State Inspector, would weaken the functioning of national human rights mechanisms in Georgia.

In parallel, various discrediting statements directed against the State Inspector’s Office and, in particular, Londa Toloraia appeared both on traditional and social media. Apart from government officials and government experts, pro-governmental and anti-opposition Facebook pages, as well as anti-Western and anti-Kremlin actors, became involved in the discreditation campaign against the State Inspector. A number of fake accounts started targeting not only Londa Toloraia but also President Salome Zurabishvili, Public Defender Nino Lomjaria, and the ambassadors of the United States and Germany.

During the discreditation campaign, 5 common messages have been identified:

While the leadership of the State Inspector’s Office criticized the parliament for conspiring to expedite legislative initiative without the involvement and consultation of the agency, the state media asserted that the way Inspector’s Office’s acquired the bill was suspicious.

On December 27th, the news agency  POSTV accused Londa Toloraia of “illegally obtaining” the bill and published an article entitled “Londa Toloraia does not answer the question of who handed her the bill, which is currently only accessible for members of the Parliamentary Bureau.”  Based on POSTV’s article, identical information with an identical headline was disseminated on the same day by other news agencies with pro-governmental editorial policies. These are: imedinews.ge, kvira.ge, lid.ge, reportiori.ge,digest.pia.ge. In addition to news agencies, Gia Abashidze and Andria Gvidiani, pro-governmental experts have been accusing Toloraia of “illegally obtaining” the bill, to which only members of the bureau should have had access to.

Both Sozar Subari, an MP from the incumbent Georgian Dream party, and the editor-in-chief of the pro-Kremlin outlet Saqinform, questioned the importance and effectiveness of the state inspector as an institution. Subari called the institute ugly and ineffective, while Arno Khidirbegishvili labelled it as anti-state.

Pro-Kremlin actors, including Nikoloz Mzhavanadze and Beka Vardosanidze, who are affiliated with the violent platform Alt-Info, as well as Arno Khidirbegishvili, editor-in-chief of the online outlet Saqinform, and Levan Chachua, leader of the ‘Georgian Idea’ party, also sought to discredit the State Inspector. These actors tried to convey the idea that the Inspector’s Office was controlled by the West. Military blogger Davit Nemsadze accused the US ambassador of meddling in Georgia’s internal affairs over her critical statements about the abolition of the state institution.

Pro-governmental experts, as well as pro-Kremlin, anti-Western outlets and Facebook pages accused the State Inspector of having links with the United National Movement. This opinion was substantiated by the decision of the Inspector’s Office on the imprisonment of the third president Mikheil Saakashvili, as well as the fact that Toloraia worked under the then Minister of Justice Zurab Adeishvili during the rule of the United National Movement. One of the arguments was also the fact that Londa Toloraia liked the post of a person related to the UNM on Facebook. The leader of the Georgian March, Sandro Bregadze, demanded that the Public Defender be prosecuted together with the Toloraia, because, according to him, both of these institutions have become tools to protect the interests of the UNM and Liberals.

In order to discredit Londa Toloraia and to show that the State Inspector is a UNM cadre, Pro-governmental and anti-opposition Facebook pages, “GeoPress,” “Political Absurdity“, as well as media outlet Prime Time, have been circulating former MP Levan Gogichaishvili’s quote, saying that Toloraia is Adeishvili’s former prosecutor. 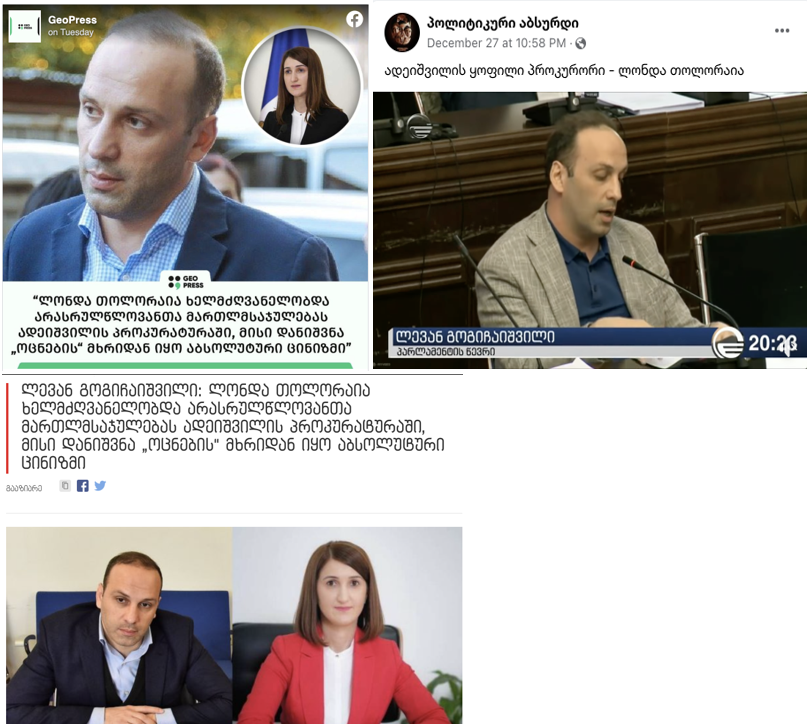 One Facebook user, Zaza Kevlishvili, shared a screenshot showing the reactions on Davit Sakvarelidze’s Facebook post, with the text “Is it ok that Londa Toloraia gives heart reactions to Saakashvili’s personal lackey, while she is the head of such an important agency?” 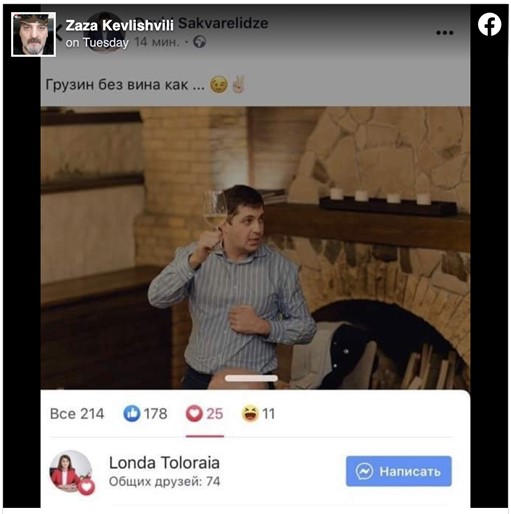 In addition, the pro-governmental media “POSTV” published a video claiming that money was being distributed to UNM members at a rally in support of Toloraia. The mentioned video news disseminated by the agency “Marshalpress“, as well as “Kvira“,For.ge, “Lid.ge“, “Reporter“, “infopostalioni.com“, “Exclusive News“, “Age.ge“, and the anti-opposition pages “Corridor of Shame“, “Political Absurdity” and “Time for Truth” in a coordinated manner. 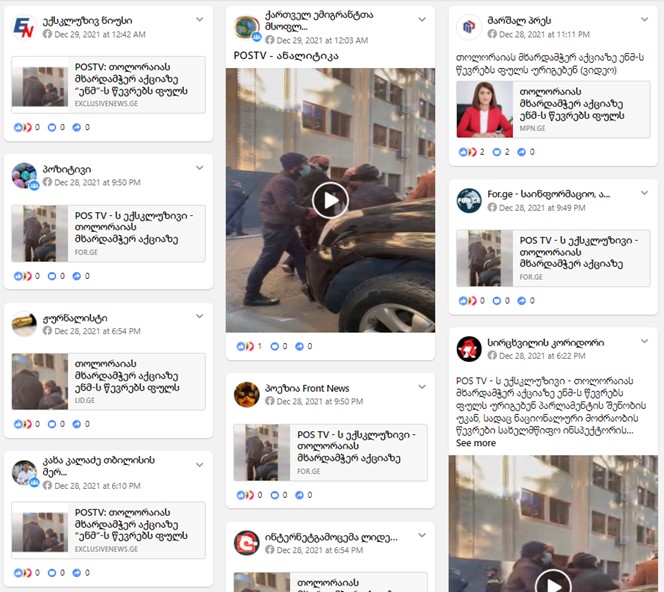 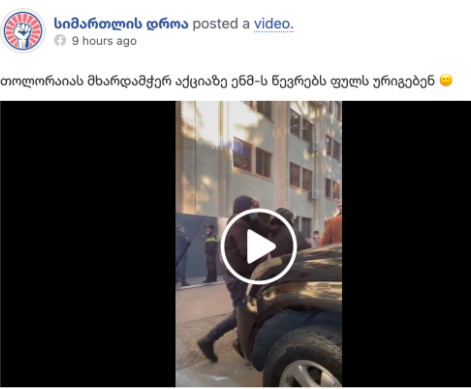 5. Londa Toloraia is a staff member of the former Prime Minister, Giorgi Gakharia, and is pursuing his interests.

Pro-governmental expert Irakli Lataria and Levan Chachua, leader of the “Georgian Idea” party, linked the service of the State Inspector to former Prime Minister Giorgi Gakharia, claiming that Toloraia was Gakharia’s cadre, who acted by his instructions.

Along with Londa Toloraia, the President of Georgia Salome Zurabishvili, Public Defender Nino Lomjaria and ambassadors of the United States and Germany have also become the targets of fake social media accounts for expressing critical assessments of the package prepared for the abolition of the State Inspector’s Office. On December 27th, President Salome Zurabishvili made a statement on the possible abolition of the State Inspector’s Office. On December 28, Public Defender Nino Lomjaria expressed her support for Londa Toloraia and called the package prepared by the parliament a repression against the Independent Institute of Georgia. The expedited project review was also responded to by German Ambassador Hubert Knirsch and US Ambassador Degnan.

The aforementioned fake accounts have been leaving discrediting comments on the posts of the following news agencies: Radio Liberty, Interpressnews.ge, Tabula as well as on the posts published on President Salome Zurabishvili’s Facebook page.

Steals the Identity of Others

False accounts accused Londa Toloraia, Salome Zurabishvili and Nino Lomjaria of colluding with the UNM, stating that the State Inspector’s service had done nothing significant all along, while Londa Toloraia was an arrogant and “obnoxious” girl, who could not get over losing her job. The fake accounts also urged the ambassadors not to interfere in the internal affairs of the state because no one cared about their opinion anymore. 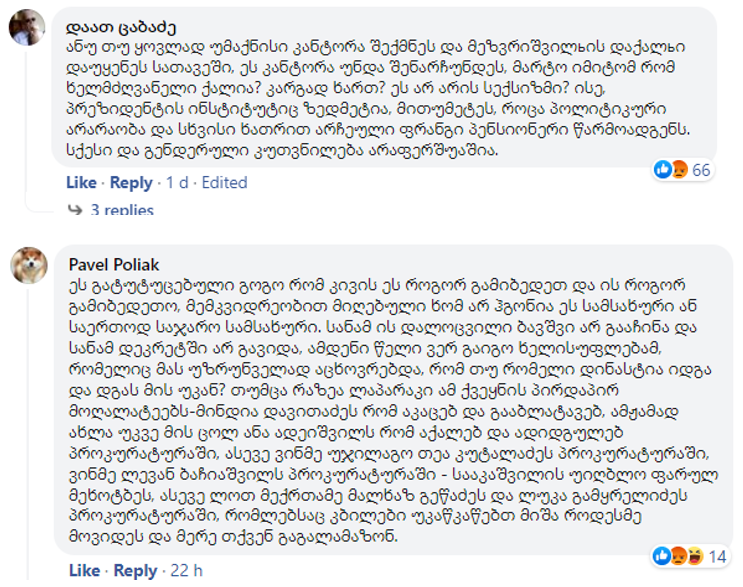 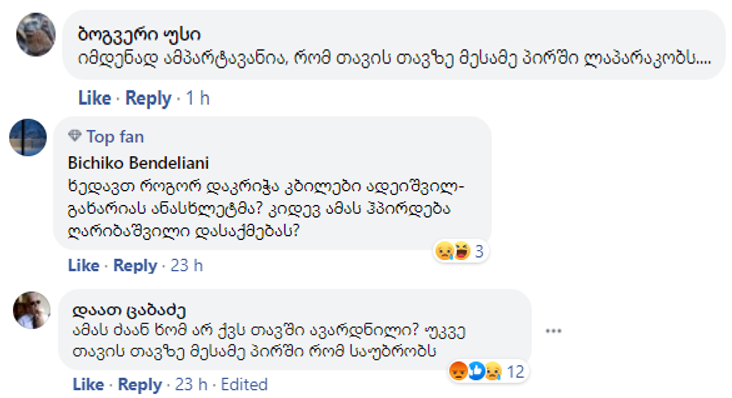 Comments on the assessments of Kelly Degnan and Hubert Knirsch: 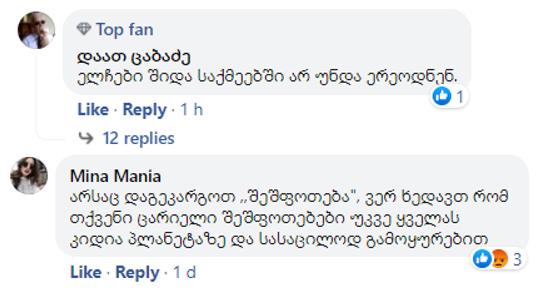 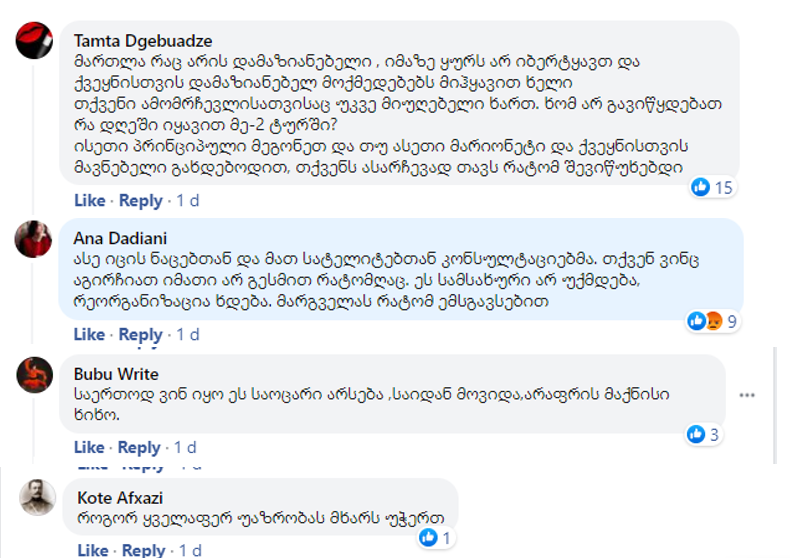 Comments on the assessments of Salome Zurabishvili and Nino Lomjaria: