4 Narratives by Kremlin and Georgian Actors about Tbilisi Protests 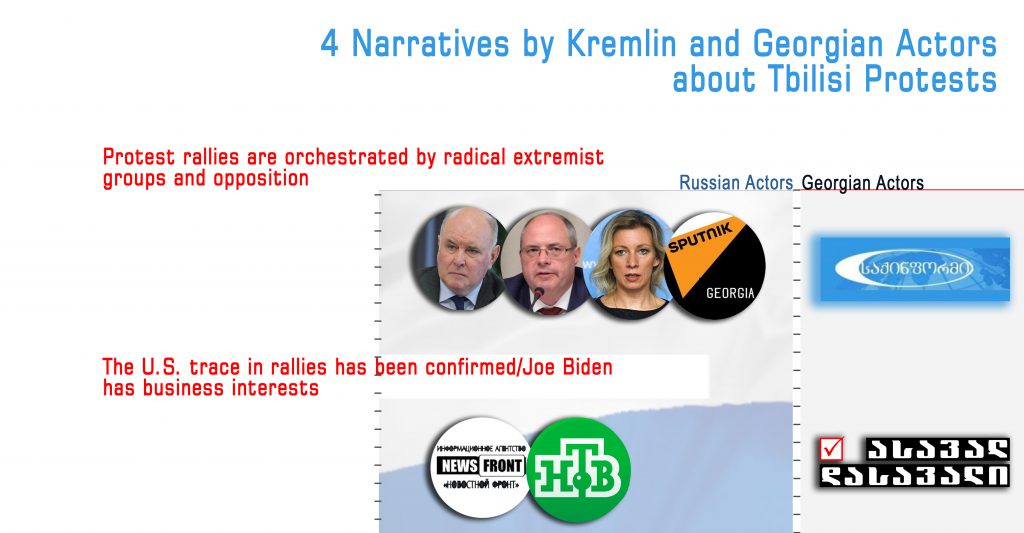 The attempt by Russian MP from the Communist Party, Sergei Gavrilov to address the delegates of the Inter-parliamentary Assembly on Orthodoxy (IAO) during its 26th session in Russian from the Georgian Parliament Speaker’s seat triggered opposition’s protest as well as unrests outside the Parliament building in the capital on June 20. Recent developments in Tbilisi were negatively assessed in Russia. Narratives spread by politicians and journalists in Russian media outlets are in line with the messages voiced by Georgia’s pro-Russian media outlets. 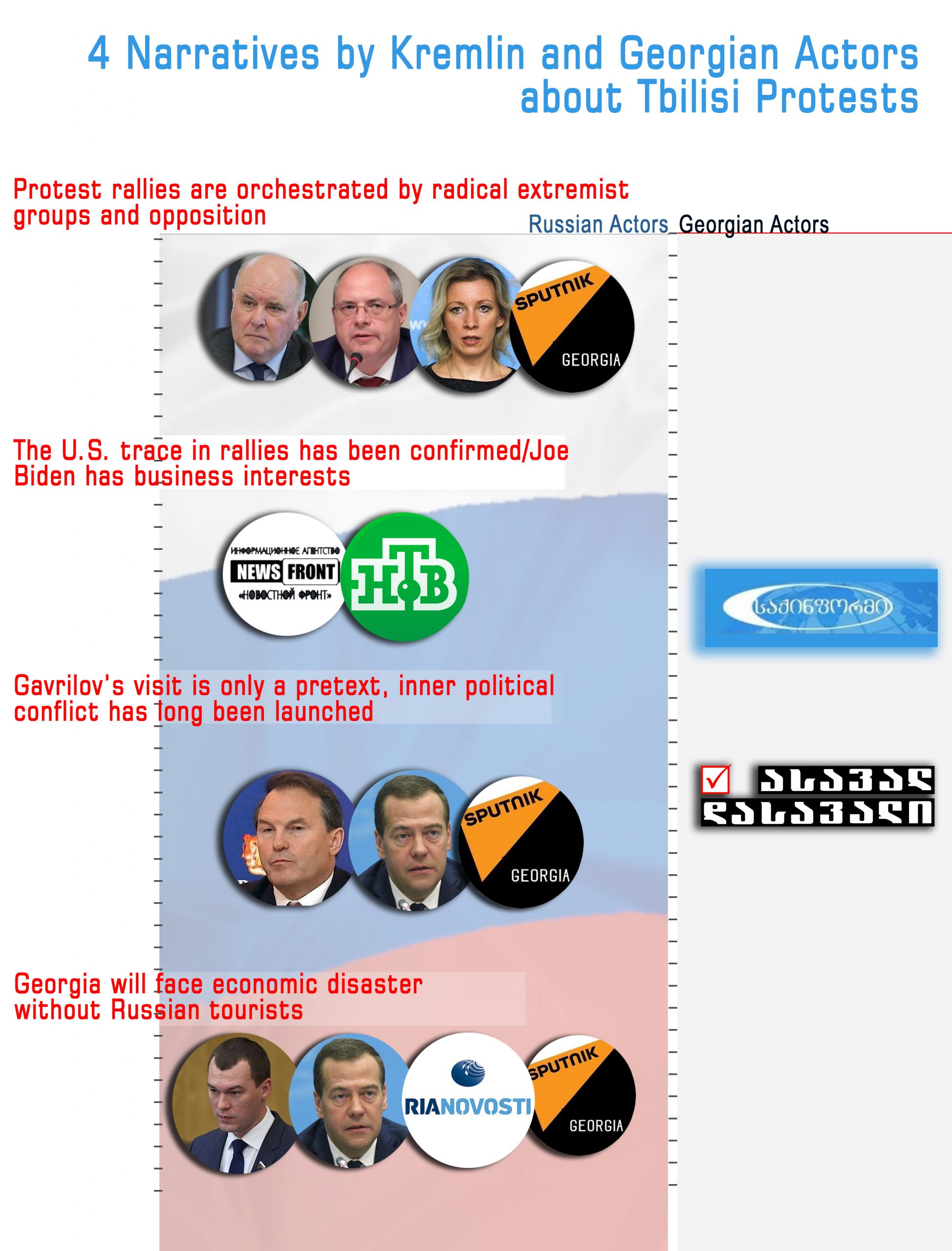 As shown in the table above, among Georgia’s pro-Russian media outlets, the messages voiced by Russian actors are most frequently spread by Sakinformi. A long article by Sakinformi’s editor-in-chief was reposted by both Sputnik Georgia and Asaval-Dasavali.

Dubbing protesters in various countries as “extremists” is the key narrative of the Kremlin propaganda. Since the change of government in Ukraine, Russian propaganda has been portraying the 2014 Maidan protesters and the new government as extremists, Nazi and U.S. puppets. The Kremlin is spreading identical messages regarding the rallies ongoing in Georgia and these messages are echoed and circulated by Georgia’s pro-Kremlin media outlets.

Another narrative spread by Kremlin actors is about Georgia’s economic dependence on Russia. According to them, tourism embargo imposed by Russian President Vladimir Putin in response to the Tbilisi protests will significantly damage Georgia’s economy. The same position is echoed by Sakinformi and Asaval-Dasavali, whose goal is to underline Georgia’s excessive economic dependence on Russia and to change public attitudes towards Russia through sowing fear of economic disaster.

1.    Protest rallies are orchestrated by radical extremist groups and opposition

Russian Deputy Foreign Minister Gregory Karasin said that the forum between the Orthodox states was thwarted because of anti-Russian sentiments of radical forces. Similar statements were released by Russian Foreign Ministry’s Spokesperson, Maria Zakharova and Russian MP Sergei Gavrilov; both of them linked the developments to radical groups. Gavrilov said that the rally was pre-planned by extremists who are against Orthodox values and exert pressure on the Georgian Orthodox Church. The same narrative was voiced by Arno Khidirbegishvili, editor-in-chief of Sakinformi, who spoke about a threat of civil war.

2.    The U.S. trace in rallies has been confirmed/Joe Biden has business interests

News-front.info also responded to the recent rallies in Tbilisi and slammed protesters as provokers ruled by opposition politicians, who gathered 10 000 people with the U.S. funding and received special instructions to stage mass unrests. According to News-front.info, it received information from an anonymous source that young people below 30 are being brought from small towns and villages of Georgia by cars and paid money in exchange for attending the rallies. Russian TV channel НТВ aired a report headlined “American trace found in Georgia’s anti-Russian protests.” Identical narrative was spread by Arno Khidirbegishvili, who said that U.S. presidential candidate, Joe Biden has certain interests in protest rallies.

3.    Gavrilov’s visit is only a pretext, inner political conflict has long been launched

Igor Morozov, a member of the International Issues Committee of the Federation Council, the upper house of the Federal Assembly of Russia, as well as Russian Prime Minister Dmitry Medvedev linked the current situation in Georgia to internal conflicts between the main opposition party and the government. Arno Khidirbegishvili also noted that Gavrilov was simply used as a pretext and that “it would have been quite enough if the Parliament’s bailiffs had asked him tactfully to vacate the occupied chair belonging to the Parliament Speaker.” However, according to him, the ruling party yielded to the provocation staged by the opposition.

Commenting on Russia’s decision to suspend air flights from Russia to Georgia, Arno Khidirbegishvili noted that according to his estimates, Georgia will lose about USD 3 billion that will trigger inflation and currency depreciation in the country. As for the pro-Kremlin actors, Dmitry Medvedev, Russian Prime Minister, and Mikhail Degtyarev, Chairman of the State Duma Committee on Physical Culture, Sport, Tourism and Youth Affairs, spoke about possible economic loss in Georgia. The latter also boycotted Georgian resorts and products citing “another wave of anti-Russian rallies” as the reason.