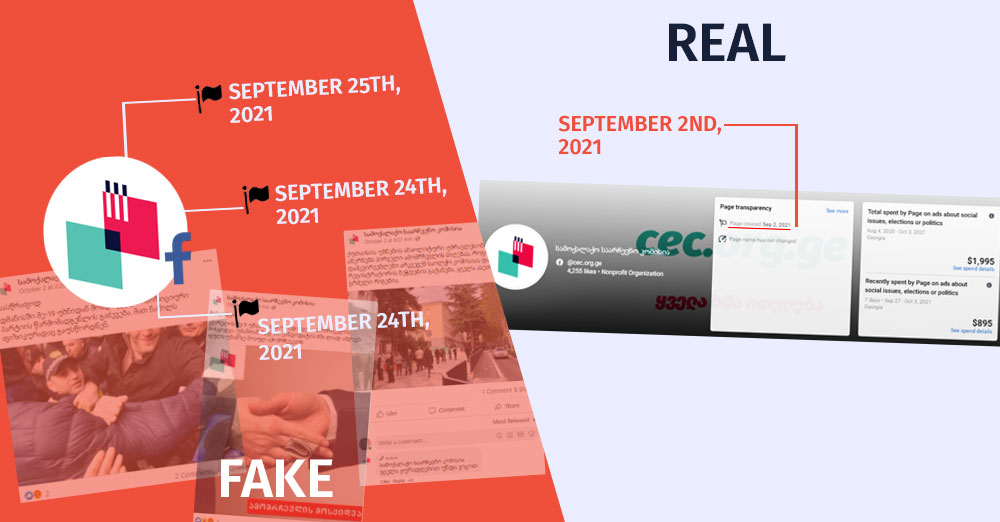 On September 3rd, a month before the local elections, a new platform, the Civic Election Commission, was set up by the joint initiative of the Civil Movement “Shame” and the Association of Public Initiatives (PIA) to promote conducting elections that are transparent and adhere to the international standards. On September 2nd, the official page of the organization was created on Facebook as well. The description of the page indicates ‘non-profit organization.’ As of October 6th, the page has accumulated 4,255 likes.

Later on, three fake pages under the same name have appeared on the social network, acting on behalf of the organization and disseminating various types of information about election violations. 2 out of 3 pages indicate ‘politician’ in their description fields, while the remaining one positions itself as media. 2 pages are created on September 24th, and one – on September 25th. The number of their subscribers is also different. 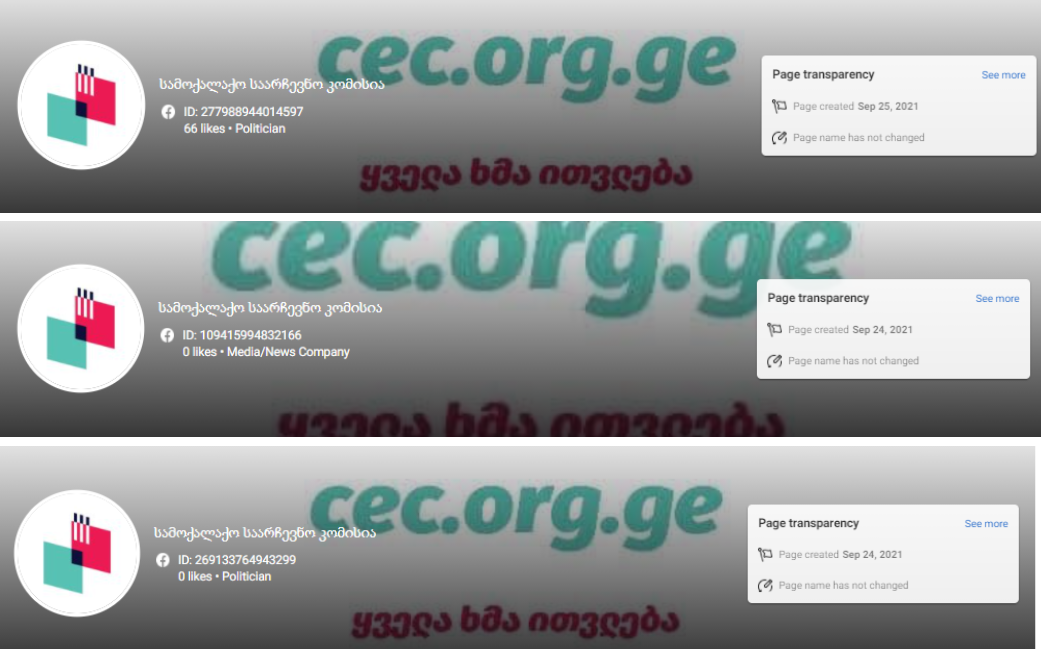 The page, which was registered under the name of the Civil Election Commission on September 24th and indicates ‘media/news company in the description, features no posts and the page has 0 subscribers.

In contrast, the page of the same name created on September 24, with a description ‘politician’ and 0 subscribers, posted 2 posts on September 25th. 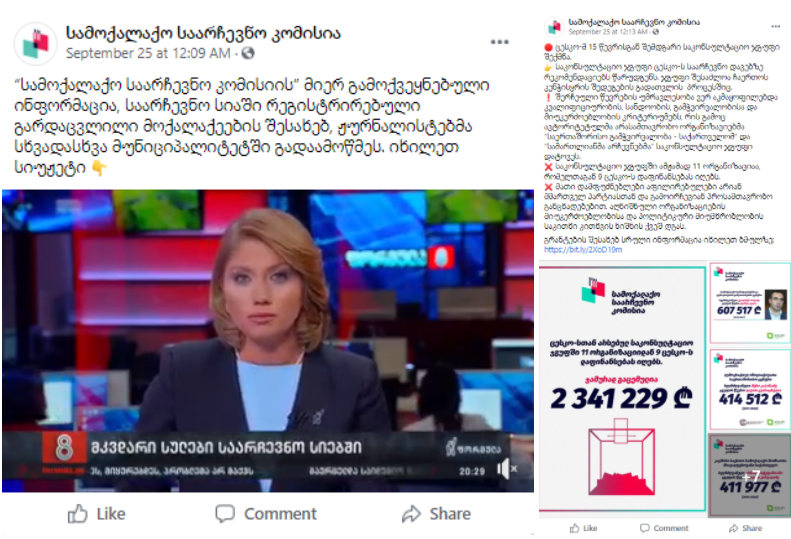 Identical posts were posted on the authentic Facebook page of the Civil Election Commission on September 14th and 16th. 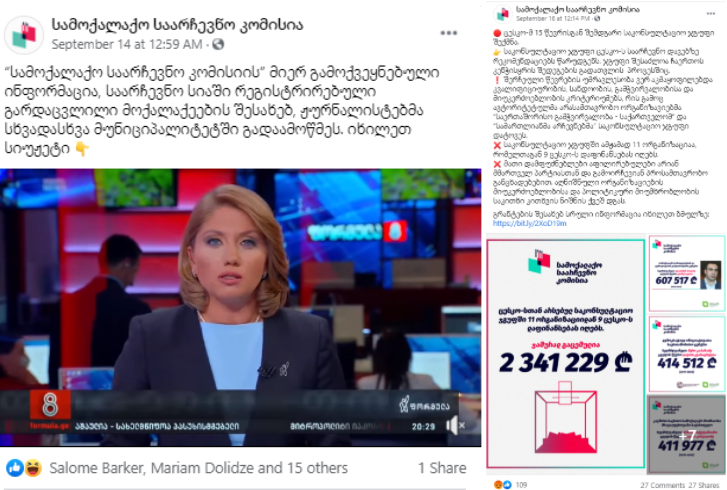 As for the third page, which was created on September 25th and also indicates ‘politician’ in the description, it has 65 reactions and 67 subscribers as of October 6th. The page features a number of posts. During the pre-election period, all the posts posted on the page were copied from the authentic page of the Civil Election Commission, where identical posts were published a few days earlier.

On the Election Day, the fake page started publishing disinformation posts different from the authentic page. The information mentioned in these posts can be found neither on the authentic Facebook page of the Civil Election Commission nor on their website.

One of the posts published by this particular page was included in a video prepared by the Central Election Commission, which tackled disinformation spread on Election Day. In the video, Tornike Gogisvanidze, the spokesperson of the CEC Information Protection Center, says that the information is as if the Kutaisi District Commission forgot to hand over the registrar’s stamp to the polling stations and for this reason, the polling stations could not be opened in time, is false. The background also includes the post published by the fake page of the Civil Election Commission, however, the video does not mention that the page is not authentic. 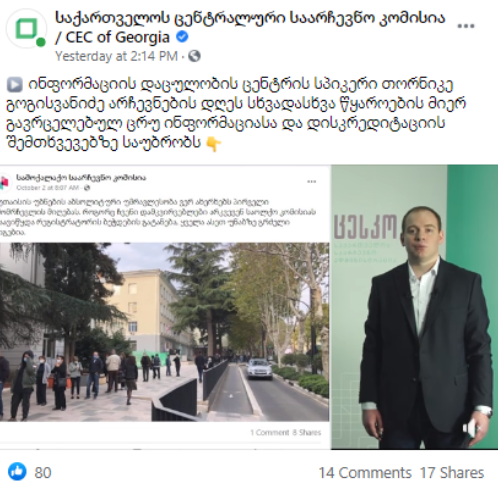 The Civil Election Commission responded to the CEC statement. The poststates that no similar content was posted on their official Facebook page and that the page that has been disseminating this particular disinformation is fake.

Noteworthy,  in some cases, the information published by the fake page and the attached photos do not match. For example, the post about the late opening of polling stations in Kutaisi is accompanied by a photo taken on Chavchavadze Street in Vake, and a post about the expulsion of UNM members from the polling units in Kobuleti is accompanied by the picture of Tina Bokuchava, depicting her removal from the 9th polling station of Zugdidi on May 19th, 2019. 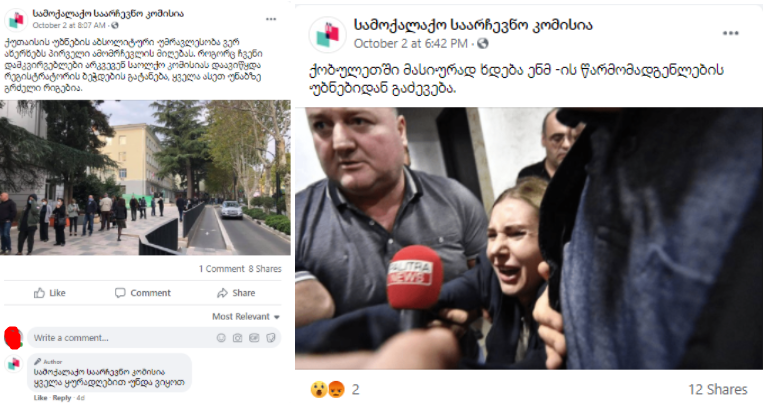 The page has used another photo from 2019 in the context of the October 2 elections, which, instead of showing the controversy at the polling station, depicts the rally in front of the Parliament. 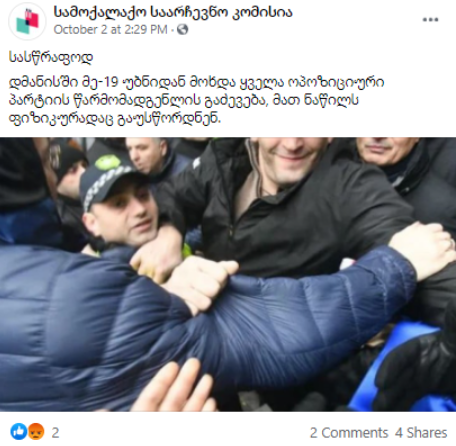 Another photo, which allegedly shows a cracked election bin, was taken from the 2020 article of the Georgian service of the Kremlin media Sputnik.