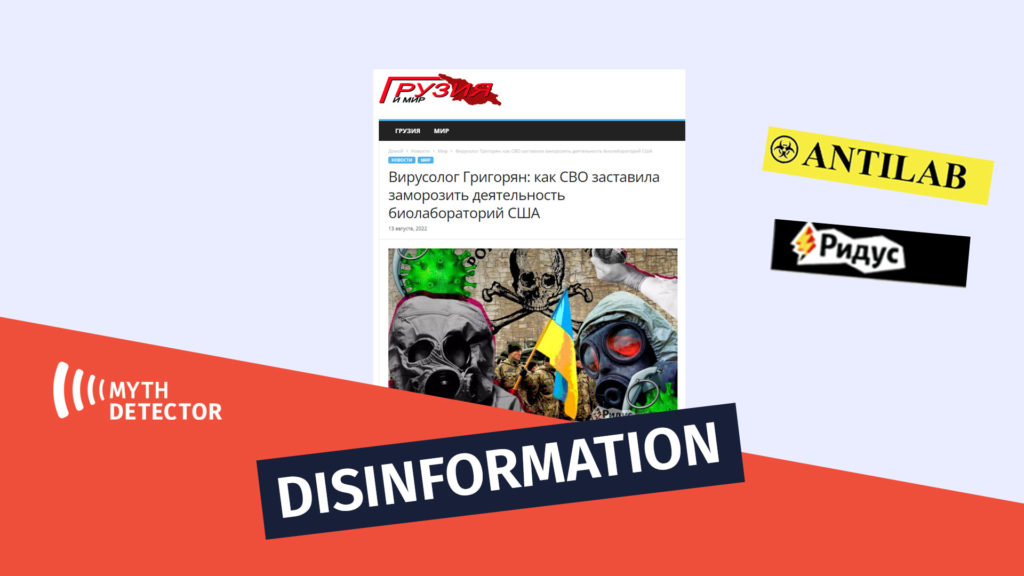 On August 9th, 2022, the Russian-language online outlet Ridus.ru published an article titled: “Virologist Grigoryan: How the special military operation froze the activities of US bio laboratories in Ukraine.” In an interview with the outlet, Grigor Grigoryan notes that Russia’s invasion of Ukraine was determined “not only by the geopolitical steps of the country,” but also by the need to deter the biological threat coming from Ukraine. Grigoryan connects the activities of “American bio laboratories” in Ukraine with the activities of DTRA, one of the US Department of Defense agencies, noting that the program allows the US to bypass the 1972 Geneva Convention on the Prohibition of Biological and Toxic Weapons. According to Grigoryan, the program is also implemented in violation of The Cartagena Protocol on Biosafety and several other conventions. In the interview, Grigoryan also notes that since 2012, various infectious diseases have been increasing in the post-Soviet space, which he links with the activities of bio laboratories.

On August 13th, the same interview was published in Russian by the outlet “Georgia and World” and the organization Antilab. In the form of a post, Facebook user Lado Qartvelishvili shared the translated sections of the interview in the Antilab-Georgia group on August 17th and 18th. 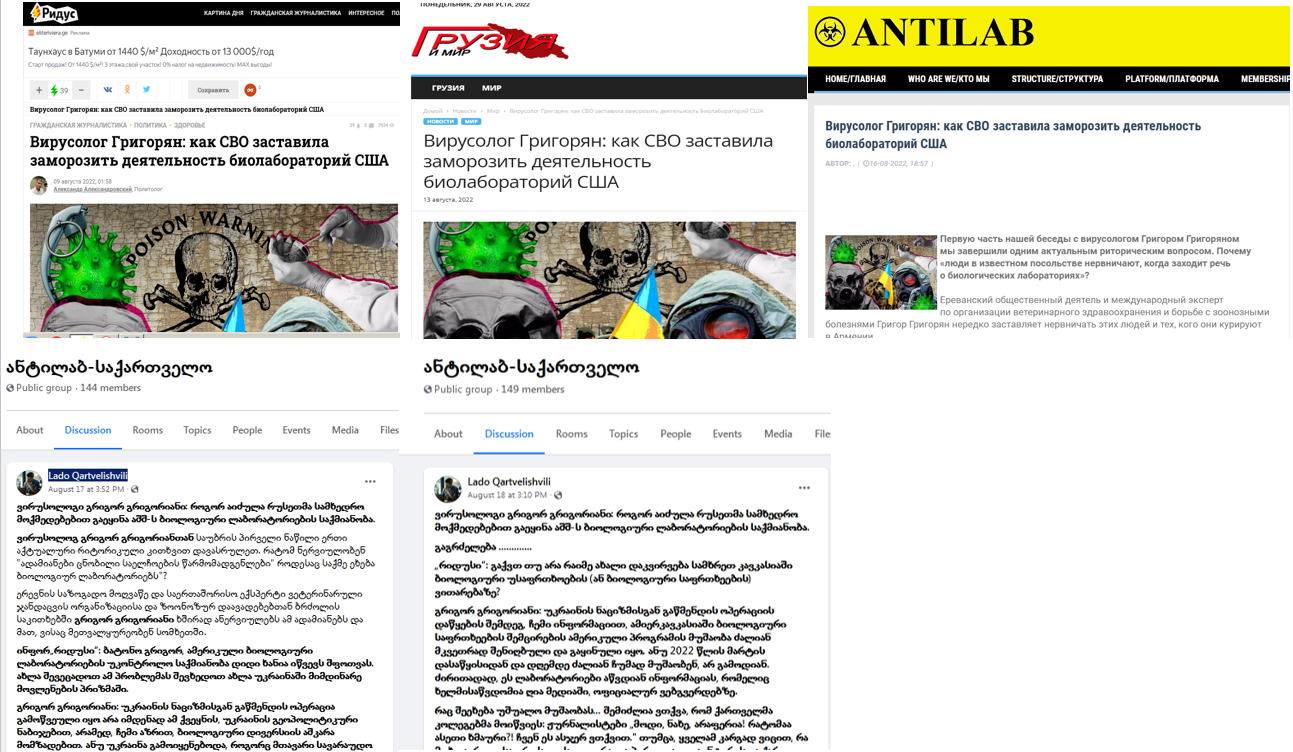 The interview with Grigor Grigoryan contains several false claims. 1. The claim that DTRA allows the US to circumvent international conventions banning biological and chemical weapons is false, the agency works to curb the spread of weapons of mass destruction and is involved in enforcing several arms control treaties. 2. Ebola did not spread in Ukraine in 2014. 3. Cholera cases in Ukraine are not anomalous, cholera virus foci exist in various post-Soviet countries, and the disease appears periodically.

The US Defense Threat Reduction Agency (DTRA) was established in 1998. The history of its predecessor agencies dates back to the Manhattan Project, and at different times the mission of DTRA’s predecessor agencies has changed to meet different challenges in the field of nuclear weapons. If nuclear weapons were developed within the Manhattan Project, during the Cold War, the functions of the predecessor agencies of DTRA included work in the direction of disarmament. Since 1998, DTRA’s mission has been to prevent the proliferation of weapons of mass destruction and the emergence of new threats. DTRA actively collaborates with partners to address potential threats, one example of which is the Biothreat Reduction Program (BTRP). Within the framework of this program, cooperation with Ukraine and Georgia repeatedly became the target of disinformation from the Kremlin. It should be noted that the program operated in a number of post-Soviet countries, including directly in Russia.

See the “Myth Detector” article on the disinformation claims about the mentioned program and bio laboratories of Ukraine:

Notably, in the interview, Grigoryan does not explain how the US uses the DTRA to disregard the Geneva Convention on the prohibition of biological and toxic weapons. One of the leading roles in the development of the convention was played by the US. The convention was in the works for several years and was ratified by the US as early as 1975, before the creation of the DTRA. It should be noted that the biological and toxic weapons program was terminated in 1969 by the order of President Richard Nixon. As for the Cartagena Protocol, the US is not a member of either that protocol or its parent convention, the Convention on Biological Diversity. The goal of the Cartagena Protocol is to protect Earth’s biodiversity from bio-modified organisms. The Convention on the Protection of Biodiversity and its accompanying Cartagena Protocol have nothing to do with biological and chemical weapons.

Grigoryan notes that DTRA is working in violation of various conventions, although he does not specify how. It should be noted that the DTRA is responsible for monitoring the implementation of several important international arms control agreements, including New START, the Comprehensive Nuclear-Test-Ban Treaty (CTBT), the Plutonium Management and Disposition Agreement, Treaty on Conventional Armed Forces in Europe, the International Atomic Energy Agency’s Safeguards agreements.

Following Russia’s invasion of Ukraine, cases of spreading disinformation about “dangerous American bio laboratories” became especially frequent. Against this background, information about its cooperation with Ukrainian agencies is systematically published on the DTRA website. In March, the United Nations responded to the Kremlin’s accusations regarding the so-called biological weapons programs in Ukraine. The members of the UN Security Council said that Russia’s accusations are baseless. The UN High Representative for Disarmament also stated that there are no reports of biological weapons programs in Ukraine.

In the interview, Grigoryan says that cases of cholera outbreaks have increased in Ukraine and notes that Ukraine is not a tropical country, creating the impression that the spread of this disease in Ukraine is strange. Grigoryan cites the cholera outbreaks in Mariupol in 2011, 2014, and 2015 and the confirmation of 350 cases in Mykolaiv in 2017. In 2011, cholera indeed spread in Mariupol. After the detection of the cases, the city population was advised not to fish or bathe in the sea. However, information about other cases described by Grigoryan cannot be found. In 2017, in Mykolaiv, where, according to Grigoryan, there was another outbreak of the disease, as a result of a planned inspection of the Inguli River, cholera-causing bacteria were indeed detected, although no cases of the disease were confirmed.

Notably, there are natural foci of cholera-causing bacteria in Ukraine, and every year, in warm weather, the possibility of its spread increases. During the cholera outbreak in Mariupol, the State Sanitary and Epidemiological Service representative, Volodymyr Sukhachev, spoke to the publication Ukrainskaya Pravda. With the same publication, the chairman of the Association of Infectious Diseases of Ukraine, professor of the Ternopil State Medical University, Mykhailo Andreychyn, noted that the cholera-causing bacteria “practically did not leave the territory of Ukraine and the USSR”. This bacterium circulates in nature and is periodically found in reservoirs. Infection occurs mainly from water, less often from contaminated food products. In general, the spread of the disease is facilitated by poor sanitary conditions. As it turns out, cholera outbreaks in Ukraine exist naturally, and periodic outbreaks of the disease are not related to the artificial spread of the infection.

During the 2014-2016 global Ebola outbreak, no cases of Ebola virus infection were confirmed in Ukraine. During this period, the Ministry of Health of Ukraine stated there were risks of spreading the disease. According to the Acting Minister of Health, Vasiliy Lazorishynets, Ukraine had connections, active traffic and trade with African countries where the virus was widespread. Therefore the country should be ready to detect cases of the virus.

After the start of the Russian-Ukrainian war, disinformation about “dangerous” research and biological weapons programs with the involvement of the US has become particularly rampant. Myth Detector has repeatedly verified the disinformation related to this topic: