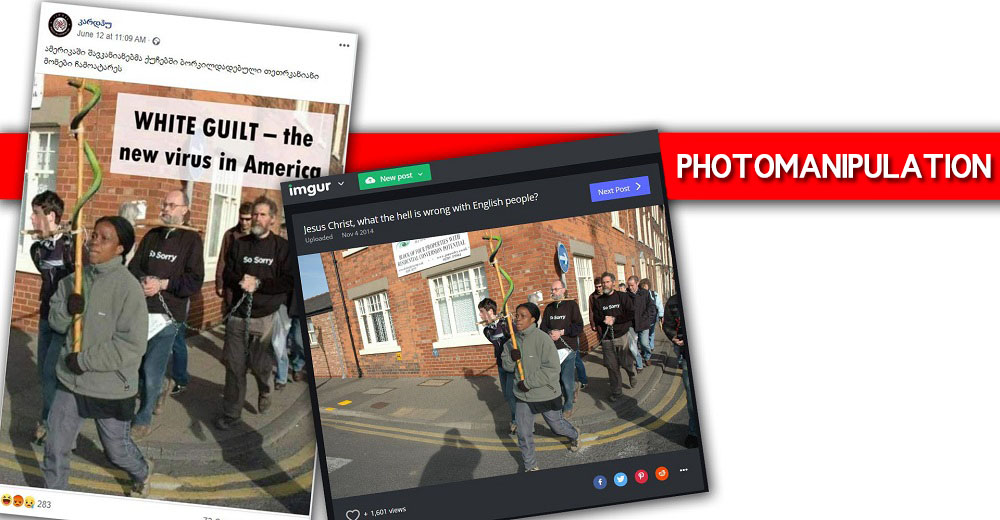 Kardhu, a Facebook page, published a photo on June 12, 2020, showing white people in chains. The text on the photo reads: “WHITE GUILT – the new virus in America”. Kardhu added its own caption to the photo: “In America, black people marched through the streets with white people in chains”. The post had 283 reacts and 190 shares as of June 21. This photo has been shared in the context of the ongoing protest manifestations in the United States by other Facebook users as well. It has also spread on other social media as well. Results of a Google image search revealed that the photo is not connected to the protest waves caused by the murder of George Floyd and has been disseminated with a false date and location. In fact, the photo is 13 years old. It was taken in March 2007 and shows members of the Lifeline Expedition, an organization that marched 200 miles to celebrate a 200-year anniversary of the abolition of slavery. The march began in Hull – the place of birth of an abolitionist William Wilberforce – and ended in Westminster. The photo disseminated via social media shows a moment from this march.

Numerous photos and videos depicting the celebrations of the 200-year anniversary of the abolition of slavery are stored in the archive platforms of licensed photos and videos. These archive materials also include the people depicted on the recently disseminated photo. Besides this march, several other events took place at Westminster which were attended by hundreds of people.