15 Civilians for a Ton of Humanitarian Products – How Does the Russian Media Spread Disinformation about the Evacuations Process from “Azovstal?” 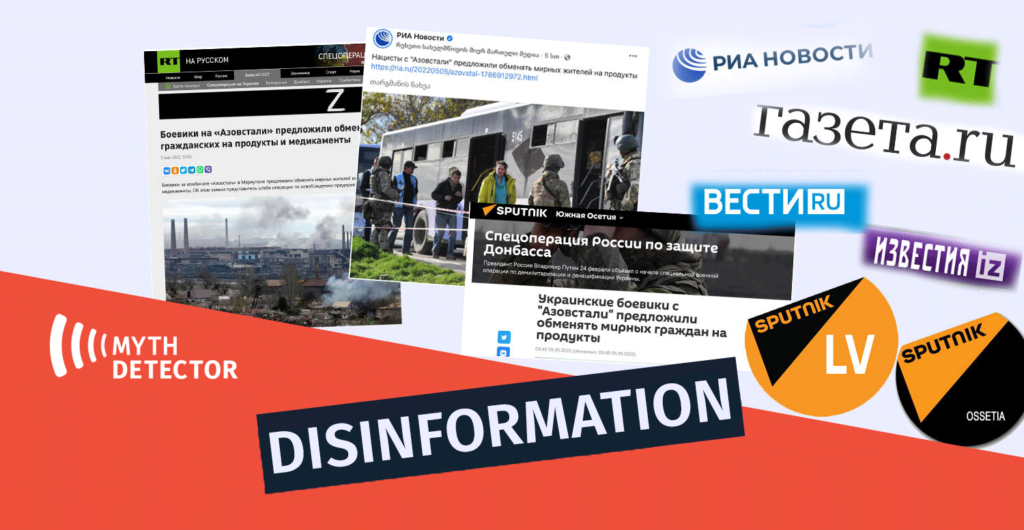 On May 5th, 2022, Russian state-controlled information agency Ria.ru reported that the Ukrainian soldiers located in the Azovstal plant had proposed to exchange the civilians hiding in the basements for humanitarian aid. Namely, 15 people for one ton. Ria.ru claims that the information was anonymously revealed to them by a representative of the headquarters of the operation to liberate the enterprise. The publication says that the “Azov” battalion will release the civilians only after receiving humanitarian aid. According to them, about 200 peaceful civilians, including women, children and the elderly, are still under Azovstal. 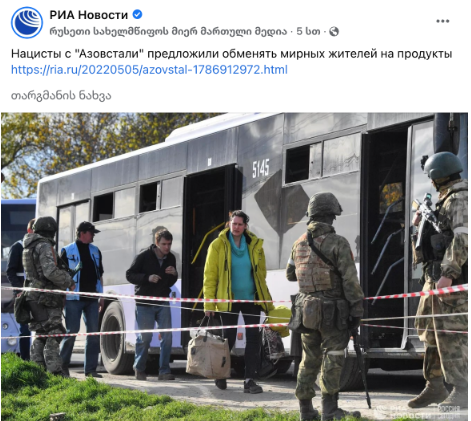 “We have to maintain contacts with the Azov Nazis and representatives of the SSU in the interests of saving the civilians who remained there. During the negotiations, they offered us to exchange civilian hostages for food and medicine. The indicated terms of the deal are fifteen hostages per ton of products, as well as medicine. They warned that no one else would be released, now they will only be exchanged,” – said the agency’s interlocutor. 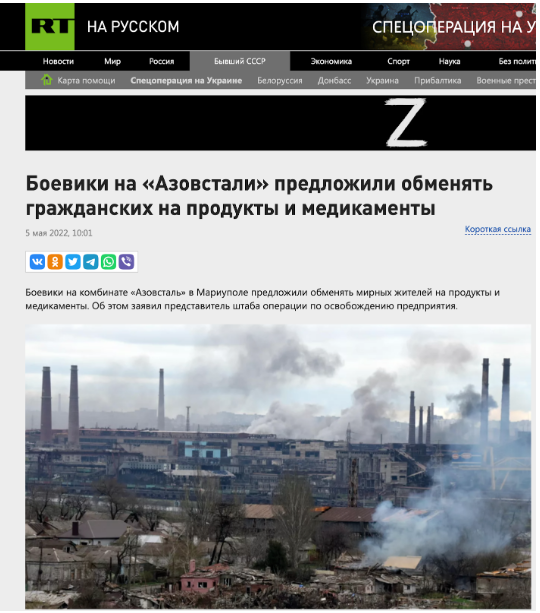 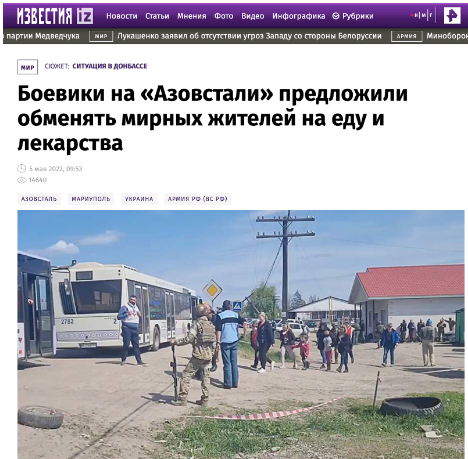 The information disseminated by the Russian media as if the Ukrainian soldiers from Azovstal are demanding humanitarian products in exchange for civilians and otherwise will not “let go” of civilians from the territory of the plant is disinformation. The UN and the Red Cross have already evacuated more than 100 civilians from Azovstal. In addition, the deputy commander of the Azov regiment calls on the international community to aid the evacuation of the civilians remaining in the basements.

The evacuation of civilians from Mariupol, including from the basements of the Azovstal plant, was organized by the United Nations and the International Federation of the Red Cross. On May 1st, the Red Cross reported on the participation of its employees and the UN in the process of evacuating civilians towards Zaporozhe. 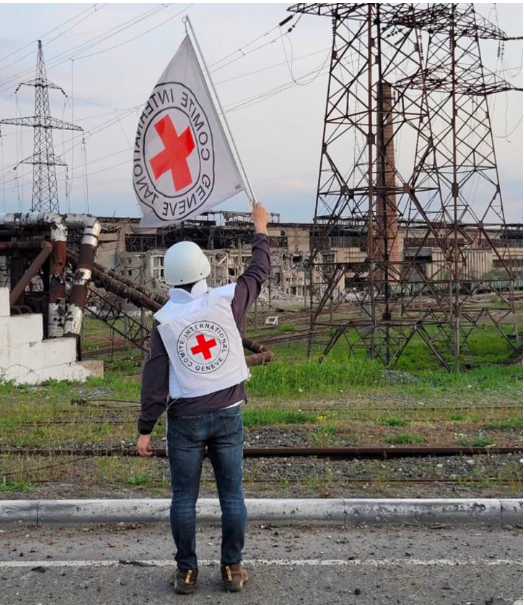 “A convoy of buses and ambulances left for the place on April 29th and, having covered a distance of 230 km, arrived at the Azovstal metallurgical plant in Mariupol on Saturday morning local time,” – the organization’s website says.

On May 1st, representatives of the Ukrainian authorities spoke of the fact as a great success achieved in cooperation with the UN and the International Committee of the Red Cross.

On the evening of May 3rd, the UN Humanitarian Coordinator in Ukraine, Osnat Lubrani, stated that the operation to safely evacuate civilians from Mariupol was successful.

The Azov Battalion has been asking for help in evacuating civilians for a long time. On April 30th, the commander of the Azov regiment, Captain Svyatoslav Palamar, called on the international community to help them to evacuate all civilians from Azovstal. He made the same statements on May 3rd and May 5th.

“We call on the international community to evacuate civilians and we personally appeal to the Supreme Commander to take care of the wounded soldiers who are dying in terrible agony from inadequate treatment. Give us the opportunity to move the bodies of soldiers out of the plant so that the Ukrainians can say goodbye to their heroes. Respond properly to a critical situation in which the enemy does not comply with any ethical norms, conventions or laws, destroying people in front of the whole world, guided by permissiveness and impunity! – Palamar stated on May 5th. 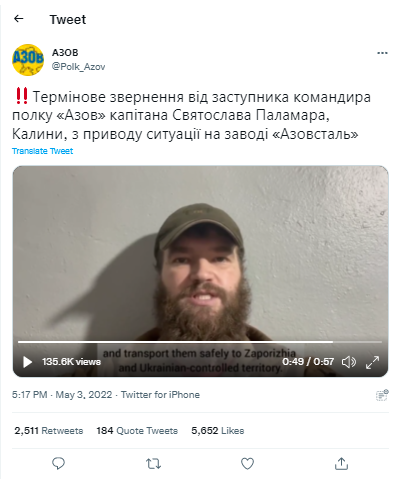 The evacuation of civilians from the basements of the Azovstal plant took place under the auspices of the UN and the International Red Cross. The evacuation became possible after the meeting of the UN Secretary-General António Guterres with the President of Russia in Moscow on April 26th, during which Vladimir Putin agreed “in principle” to the UN and the International Committee for the Red Cross involvement in the evacuation of civilians from the Azovstal plant.

More than 100 people were evacuated from the basements of Azovstal before the shelling of the plant resumed on the same day, May 3rd. Refugees were taken by bus to Ukrainian-controlled Zaporozhe.